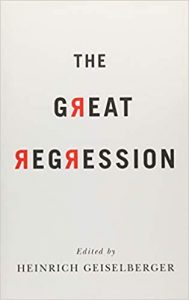 Dr. Ezgi Pinar is a political scientist and currently carries out her post-doctoral studies in …

It has been a few years since The Great Regression was published. Still, the content of the book is very much up to date and worth wide reception in the circles of critical social scientists. The Great Regression  performs a task. It makes an open call to discuss the current political situation of the world, namely the right-wing populism conquering the political sphere and political agendas of various countries. It advises to social scientists that they should adjust their lenses to penetrate the causes and facts behind symptoms. With this dimension, The Great Regression can also be seen as a guide to leftist politicians, political milieus and social movement organizations. It affirms an old but timely debate on the relationship between the social movements of yesteryear and contemporary social movements. More specifically, it addresses the tension between class politics and identity politics within the context of current global political trends. Translated into fourteen languages, The Great Regression is an outcome of an international project of contemplation and theorization and accordingly covers different country cases. It includes fifteen chapters of fifteen different authors, including university professors, journalists and philosophers each renowned in their field. As Geiselberger quotes Ulrich Beck in the preface, ‘[w]hen a world order breaks down, that is when people begin to think about it’ (9). It seems that all the authors believe that the world order is in fact breaking down, and it is now their duty to analyze it.

Arjun Appadurai, while calling Europe ‘a democracy fatigue’, highlights the link between the rise of authoritarian leaders and neoliberalism. He argues that political leaders who cannot or do not address the consequences of the global economy, play the culture and nationalism card to maintain their popular support. While there is nationalism and right-wing populism rising on the one hand, he still believes that in the European setting, liberal plurality can be a cure for democratic deficiency. For Zygmunt Bauman, migration from Third World countries reveals the contradictions of European democracy and he targets the concept of assimilation. He ends his article ‘Symptoms in Search of an Object and a Name’, advocating the need for cosmopolitism if democracy is to salvaged.

Donatella Della Porta’s chapter, ‘Progressive and Regressive Politics in Late Neoliberalism’, goes beyond the conceptual dichotomy of progressive and regressive politics and looks into the social grounds and respondents of these two political tendencies. According to her, the social base of left opposition has already shifted to the middle class from the working class and it is here that right-wing populism flourishes. Nancy Fraser, in her chapter ‘Progressive Neoliberalism versus Reactionary Populism: A Hobson’s Choice’, uses the concept of progressive neoliberalism with its cultural context similar to Della Porta. According to Fraser, this dichotomy can be misleading. While addressing the same reality, she is not distraught over the fact that progressive neoliberalism has been defeated by right populism. According to her, it is just the moment where a new left politics can be rebuilt. Eva Illiouz is another contributor that associates the rise of reactionary populism with the decline of the working-class politics, with specific reference to Israel’s political dynamics, as the name of the chapter suggests: ‘Populism or the Crisis of Liberal Elites: The Case of Israel’. She argues that progressive cultural elites have played a role in the trivialization of labour politics.

According to additional contributor Ivan Krastev, the fading of socialism as an ideology played a role in falling back from liberal democracy and in the reactionary deviation after 1989. Within the so-called new world order there weren’t any alternatives to liberal democracy. However, liberal democracy didn’t meet the expectations of the people, especially younger generations who lost their interest in politics in general. For Krastev, the situation is susceptible to what he calls ‘Majoritarian Futures’, because it is in the main globalization that has played a role in the rise of right-wing populism.

At present, the world is witnessing a global insurgency under the nomenclature of the Climate Strike. Bruno Latour puts forth this issue as part of the current political crisis of Europe. According to him, the failure of globalization and migration are other components of the crisis that need to be addressed. In his chapter ‘Europe as Refuge’, it is argued that from today’s crisis there is a potential to rebuild a new united Europe. Climate change for him plays and continues to play an increasing role in pushing European borders.

Further contributor Paul Mason invites anyone who is involved in politics to show courage in facing the reality of today and starts from there in his essay ‘Overcoming the Fear of Freedom’. He criticizes the particularist politics that has become dominant within left politics for years and alternatively amplifies the scale of politics by referring to the notion of totality. Part of his criticism is directed towards those who began to see nationalism, xenophobia and racism almost as a natural reaction or attitude of the working classes. Mason makes clear that this wasn’t the case in the 1970s and he reminds us of the importance of a historical perspective and historical analysis.

Compared to Mason, Pankaj Mishra speaks from a different level of analysis that can be summarized as the individual level. His main opposition is to the modernist understanding of rationality and the liberal assumption that individuals are rational actors behaving according to their material interests. These are the dark sides of the enlightenment legacy as already implied in the title of his essay ‘Politics in the Age of Resentment: The Dark Legacy of the Enlightenment’. For him, enlightenment is not enough to understand today’s world. Moreover, it is misleading to see authoritarian tendencies as irrationalism and he therefore believes that a new progressivism can only be possible by abandoning these old ideas.

An additional call for courage comes from the chapter by Robert Misik titled ‘The Courage to be Audacious’. Misik perceives the rise of authoritarianism as anti-politics, which is an outcome of the gap between the masses and professional politicians. For him, first and foremost, left politics should avoid this gap. He also accuses social democrats and socialist politicians of elitist inclinations and invites them to speak ‘class’. He argues that social democrats and socialist parties have increasingly become middle-class parties. Workers and the poor are no longer represented by these parties and, like the Israel case described by Illouz, they also feel culturally alienated from those parties and drift away. It can be said that as a journalist he is much more direct in his words and dares to point out this uneasy reality.

According to contributor Oliver Nachtwey, within a Polanyian perspective, we find that in the very dynamic of today’s relation between progression and reaction, there lies a unique relation between the market and civilization. He reads the process with the term ‘decivilization’ in his chapter ‘Decivilisation: On Regressive Tendencies in Western Democracies’. Those who are left outside civilization due to market forces now play their role in reactionary politics. Yet Nachtway, with his focus on Western civilization as an ideal, nevertheless overlooks the antagonistic relations in the market society. César Rendueles, on the other hand, sees in his contribution the crisis of both market and civilization as a hegemonic crisis. In ‘From Global Regression to Post-Capitalist Counter-Movements’, it is argued that following the 2008 crisis, people targeted global capitalism since they began to see it as responsible for their deprivation, which has, according to Rendueles, an affirmative potential.

In his essay, ‘The Return of the Repressed as the Beginning of the End of Neoliberal Capitalism’, Wolfgang Streeck provides us with a political economy perspective. He analyses populist tendencies as an outcome of the crisis of neoliberal hegemony and sees them in opposition to neoliberalism. He adds that this oppositional tendency may have a stimulative impact on the democracy of national scales. David Van Reybrouck in his contributed letter, ‘Dear President Juncker’, problematizes democracy on another scale: he criticizes the EU and sees it as an expired project suffering from the deficiencies and drawbacks of representative democracy. In the name of the EU, he questions liberal representative democracy and its institutions.

In the final chapter, Slavoj Žižek addresses the grassroots of what he calls in his title ‘The Populist Temptation’. His main impetus is to remind the reader of the universalistic essence of left politics. Based on his faith in it, he sees a potential for left politics in the current, chaotic global situation. He has this faith and hope insofar as he thinks the right populism is fundamentally a class reaction.

Together, the authors of The Great Regression make explicit that there is an affirmative and progressive potential within their object of inquiry which is a stratification-based social structure. The book has the potential to contribute to scholars and politicians dealing with various topics such as democracy, inequality, poverty, climate change and xenophobia from different political perspectives. The aim of dealing with the problems in order to seek solutions overarches all these topics. Some of the chapters feature culture and institutions, while others feature political-economic dynamics. However, it should be noted that the space allotted to both dynamics consists predominantly in the western world. Eurocentrism therefore appears as a common blind side to all of the chapters. To the extent that The Great Regression  can be seen as part of an international project, this omission could fruitfully trigger a starting point for other academics, journalists, intellectuals and politicians the world over. Extending this kind of project, an international discussion, would deepen the topics presented in The Great Regression.