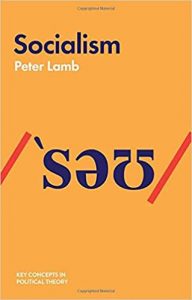 As inequalities widen and the climate crisis intensifies, younger generations are coming to politics deeply concerned that things aren’t right. Part of rebuilding a Left with social weight is creating resources for budding activists to find the historical knowledge and theoretical thinking necessary to grow movements for social and environmental justice. While the number of young people openly identifying as socialists remains small, more people are open to the promise of socialism than at any point in the past fifty years. What is socialism, and why does it matter? The political stakes are high in books offering answers to such questions. Imagine writing an introduction to socialism under these conditions. Maybe you’d begin like this: “Alexandria Ocasio-Cortez is one of the most popular political figures in the US today… and she openly calls herself a socialist.” Not punchy enough? How about this: “Socialism is back.”

The opening line of Peter Lamb’s introductory book to socialism reads: “Rich in diversity, socialism nevertheless has at its theoretical base a clear configuration of tenets” (1). Specifically, Lamb defines socialism as “an ideology of the left based on a distinctive combination of three main principles, equality, freedom and community” (1). These initial lines indicate that the book is an introductory overview of a key concept in political theory, written for the classroom and not the budding activist.

In six chapters across 135 pages, Lamb sketches a picture of socialism as a set of ideas. What holds socialist ideology together, he says, is little more than the belief in some degree of egalitarianism, and that individual freedom and social justice depend on each other. Lamb’s primary interest is not contrasting the core assumptions of socialism with alternative ideologies like liberalism, anarchism, or fascism. Rather, the book sets out to map conceptual differences within socialism, among what he defines as its three main currents: Marxism, social democracy, and “associational socialism.”

Lamb dutifully covers many of the debates you’d expect to see in a survey text of this sort: reform or revolution, internationalism or socialism in one country (though I was surprised not to find any discussion of the Second International’s wreckage on the shoals of imperialism), positive or negative freedom, and the success or failure of really existing socialisms. The chapter entitled “Blueprints for a socialist society” does an impressive job describing core features and limits of Cole’s guild socialism, Crosland’s social democracy, Mboya’s African socialism, Mao’s socialism for China, Kardelj and Yugoslav socialist-self-management, and Chavez’s Bolivarian socialism (92-115). Throughout, the book prioritises canonical figures over players on the contemporary stage. In other words, we learn more about Fourier than AOC, more about early twentieth-century English guild socialists than Corbynism or the International Women’s Strike. Oddly, given the book’s historical bent, the soviets of 1917 are not discussed.
Despite Lamb’s appreciation for the development of ideas in history, the book’s emphasis on categorical distinctions crowds out messier histories of mass struggle. For example, we’re told that Marxists want “the annulment of private property” (55), social democrats want “regulation of property ownership” (55), and associational socialists want to create new organisational networks through which “control of industry would be shared between producers and consumers in the community” (68). You could read this book and have no idea that Communist Party activists in the UK and US were central players in labour unions and mass movements responsible for the broad social welfare state, the pinnacle of social democracy. The book risks leaving the impression that social democracy today is just as much of a challenge to capital as was the Beveridge Report. Facing up to the neoliberalization of social democracy would make trouble for Lamb’s taxonomical approach.

On the question of social change, Lamb writes that Marxist-Leninists see revolution driven by “a small, disciplined and dedicated party operating as the vanguard” (81), whereas Gramsci’s theory of transformation “envisaged people having a strong role in working towards their own future” (85). The conceptual distinction is dubious: a classification of socialist thinkers that places Gramsci outside the Leninist tradition is imposing rigid lines where they don’t actually exist. But even if we assume that major conceptual differences divide those two thinkers, surely any account of Leninist thought is misleading when offered without reference to the mass character of the Russian Revolution.

Another problem of organizing the book around conceptual differences is the tendency to treat all variations within socialism as equally relevant to the newly socialist-curious reader. The chapter on “Freedom, Equality, and Community,” for example, devotes several pages to Stalin’s notion of the dictatorship of the proletariat (40-2), before moving “from one socialist extreme to another,” to note Tony Blair’s New Labour vision (46). Is Stalinism socialism? Is neoliberalized social democracy? At different points in the book, Stalinism stands in for the Marxist-Leninist tradition, so we’re safe to assume Lamb does indeed classify it as socialism, albeit an “authoritarian” kind. However, the assumption is never explained in detail. Hal Draper’s (1966) time-tested essay on “the two souls of socialism” would’ve helped make sense of socialism from above, but hardly anything from the tradition of socialism from below appears in the book: no Tony Cliff, no CLR James, no Lindsay German, no Keeanga-Yamahtta Taylor, no David McNally.

Like it or not, the socialism-from-below tradition has arguably been the most robust expression of Marxism in the English-speaking world since the 1960s. Its absence from the book is especially striking, therefore, in light of Lamb’s keen attention to the much more intellectually and politically amorphous tradition of what he calls “associational socialism.” This is the socialism of GDH Cole and Harold Laski, who Lamb reads as forerunners of Laclau and Mouffe.

Associationalists, Lamb writes, believe socialism requires central government, yet place special emphasis on people living “cooperatively as associates in voluntary groups” (21). Conceiving the political battleground as civil society, not class struggle, associationalist socialism believes “socialists need to look beyond the working class” to change the world (118). Lamb frames this tradition as the just-right dish between spicy, unpopular Marxist-Leninism, and tepid, thin-gruel social democracy. Despite social democracy being the leading strand of socialism since the 1950s (at least when measured by influence over Western governments), Lamb devotes only two pages to it in the chapter on theories of the state and economy (63-5). By contrast, Lamb’s associationalism, represented by Fourier, Cole, Laski, Paul Hirst, and other comparatively less consequential figures, are given fully eight pages (65-72).
The bigger problem with Lamb’s preference for associationalism is that it inaccurately suggests that even the best theories of socialism conceive of racism, sexism, and other forms of oppression as separate concerns. Certainly Lamb wants socialists to fight all forms of oppression, and wonders how best to do so, but he frames the question like this: “Can [socialists] devote more attention than has traditionally been the case to the non-class issues without weakening their commitment to the working class?” (118).

To Lamb, non-class issues include gender inequality, disability, homophobia, and racism. Compare this view to one of the richest, most active currents of socialist thinking in the last ten years: namely, social reproduction theory. The essays in Tithi Bhattacharya’s (2017) edited volume Social Reproduction Theory: Remapping Class, Recentering Oppression theorise that class is always reproduced through specific forms of racialization and gendering. Groups facing oppression are also workers, and the working-class is gendered, racialized, and structured by other inequalities. Genuine working-class liberation, therefore, must overcome all forms of oppression. If Lamb is interested in a vital debate within contemporary socialism, here it is. Bhattacharya, Susan Ferguson, Cinzia Arruzza and other Marxist scholars and activists are having it out with class-reductive socialism. Yet Lamb’s book doesn’t mention social reproduction theory, nor cite a single source from its rapidly growing literature.
In the absence of a more integrative class analysis, Lamb relies on the additive conception of Laclau and Mouffe, arguing that “socialists should recognise the need to combine with other movements fighting oppression in contemporary capitalist society, without assuming that socialism should hold precedence” (34). In the concluding chapter, Lamb expresses solidarity with “other movements seek[ing] to overcome oppression,” acknowledging that their struggles are “no more or less significant than the socialist aim of liberating the working class from exploitation” (121). It’s meant to be a forward-looking declaration against histories of socialist (economic) reductionism. However, it betrays a rigid, shallow conception of class, not to mention of those “other movements” that Lamb hopes will “ally with socialism, thus enabling each other to reach their own emancipations” (121). As if the emancipation of women, people of colour, or queer people could happen separately from working-class emancipation, or vice versa.
Lamb set himself a daunting task: to introduce, to a new audience, one of the most influential political theories of the last several centuries by describing its central tenets and internal variation. Oh, and you’ve less than 150 pages to do so. Think of the choices to be made: do you organise the book chronologically or by theme? Focus more on formal theorising or political writing? How much historical context is enough, recognising that this is a book about concepts? What’s the balance between developments in the global north and south? How much should the contemporary political landscape (migrant crises, the International Women’s Strike, the reemergence of socialism as a mass electoral force in the UK and US) set the terms of analysis? These are important questions for all of us working to help people find their way into socialism.

Lamb’s book is a readable summary of how socialism as a body of ideas is understood within mainstream social science. The book is not, however, an introduction to socialism likely to engage people new to politics whose primary interest is contributing to power struggles in the twenty first century.