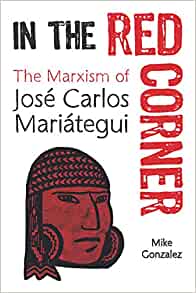 Mike Gonzalez
In the Red Corner: The Marxism of José Carlos Mariátegui

Dr. Jean-Pierre Reed is Associate Professor of Sociology, Africana Studies, and Philosophy at …

In this book, Gonzales sets out to provide the reader with an instructive overview, as the book title suggests, of José Carlos Mariátegui’s relevance to Marxism and Latin American political thought. Mariátegui, Gonzalez demonstrates, was a creative Marxist ahead of his time. A life-long activist, operating and writing on the heels of the Second International and in the context of the Third International, Mariátegui was a Marxist against the contemporary Marxism of his time in Peru and abroad. How was this the case? Rather than adopting a reformist strategy, he advocated for a United Front (in much the same way as Antonio Gramsci’s historic bloc). Rather than adopting a ‘stages of development’ approach to his understanding of societal transformation, he advocated for a more grounded historical approach sensitive to the reality of nations. Feudal-like and colonial-like conditions in Peru –his motherland– and Peru’s place in the capitalist imperialist order made its development inconsistent with European models. This latter lived and observed reality, in fact, contributed to his rejection of the ideology of linear progress, another ‘anomalous feature’ of his Marxism (on this significant point, see Löwy 2019). For Mariátegui, the future is informed by the past; yet the course of history is not linear. Rather, the course of history is ‘replete with contradictions, deviations, and misguided optimisms’ that often come with unexpected consequences (127). Progress in an imperialist context is nothing more than a bourgeoise and colonial myth. Additionally, unlike notions of progress, the past is not something outdated, an inferior remnant to be left behind. The past –or more appropriately stated, past traditions translated to fit contemporaneous scenes–  can furnish the present with an alternative vision of reality, a myth, that can inform and inspire the formation of a more humane society in the future, as Mariátegui proposed to be the case with notions of Inca communalism in Peru. Mariátegui, as such, rejected mechanical materialism, its overgeneralisations and focus on ill-informed notions of progress, the past, and what constitutes materialist thinking.

Mariátegui also understood class struggle otherwise. Class struggle emerges from below, not spearheaded by a vanguard, although the vanguard plays avantgarde and educative roles. ‘Revolution is the act of “the multitude,” driven by a myth’ (73). The class struggle, additionally, is defined by an alliance between indigenous communities and the industrial and rural working classes, a United Front across social and class locations. In this political scenario, the industrial working class is not the sole history-making subject. It shares this role with other subaltern groups, although indigenous communities and the rural proletariat –again contrary to the Marxist idea of the time– assume the central role in the class struggle. Significantly, Mariátegui conceives of socialist transformation not in objective (i.e., structural/economic deterministic) but rather subjective terms. This focus on the subjective dimensions of socialist transformation is another key feature that distinguishes his Marxism. His focus on myth –‘feeling, passion,’ ‘a cultural revolution,’ ‘a universe of alternative values,’ ‘the ethical’ component of existence, ‘the yearnings of working people’ for another world, what moves and inspires them, their anticipatory consciousness ‘born out of collective experience’ (11, 15-7, 35, 39, 76)– is central to this approach, and reveals him as an early forerunner of what eventually came to be known as neo-Marxism, a Marxist approach that challenges economic determinism and scientific positivism and underscores the importance of subjectivity –i.e., culture, consciousness, identity, values–  in the overcoming (or reinforcement) of capitalist social formations. The focus on subjectivity, of course, is not a rejection of materialism. Instead, it is an attempt at understanding material conditions in a new way. His stress on transcendence rather than hegemonic domination and his appreciation for the role of tradition (not traditionalism), moreover, gave him the reputation, to borrow Michael Löwy’s language, ‘“of a romantic Marxist”’ (16-7, 44, 196).

The aforementioned unique components of Mariátegui’s Marxism are well known. This is perhaps the reason Gonzalez does not provide the reader with a theoretical treatment of his ideas, although he does cover these points, some more than others. However, he provides the reader with a contextual –biographical, intellectual, political, literary, economic, historical– understanding of his formation as a unique Marxist thinker. In so doing one learns about some of the key figures, political events, and historical trends –at home and abroad– that influenced his thinking, activism, and championing of Marxism as a dialectical method rooted in lived reality. Such a contextual treatment, of course, does not prevent him from addressing key concepts/themes/parallels. Gonzalez’s focus on myth, the ayllu (Inca commune) and Inca socialism, the United Front, the Mexican Revolution, Surrealism, Futurism; drawing parallels, among others, between Mariátegui and Antonio Gramsci, Georges Sorel, Paulo Freire; and identifying common themes between Mariátegui and Marx is surely an indication of such an addressing. Covering the tensions between Mariátegui, respectively, APRA (American Popular Revolutionary Alliance, a Peruvian political organization/party), and the Comintern is also instructive. The parallels between Mariátegui and Gramsci –some direct, some not– are also instructive. They show, despite the fact that they did not share an intellectual relationship, how these two ‘outside’ thinkers, independent of each other, were attuned to the counterhegemonic potential of the subaltern and lived experience as analytical categories when the majority of Marxist thinkers at the time were oblivious to it.

Yet, some things are missing. Religion is one of them. Gonzalez makes reference to popular religion several times but does not explore its counterhegemonic potential in any detail. The work of Mariátegui influenced one of the key figures in liberation theology, Gustavo Gutiérrez. Gonzales also references Leon Trotsky as an intellectual / political influence– just like he does with Sorel –but he does not elaborate much on this point. No substantial engagement is made with some important works on Mariátegui, past and present, and in particular the works of scholars from the Global South. Mariátegui’s connection to the theory of development is not taken up. No connection is made to the Sandinista revolution, and he could have elaborated more on the connections the Mexican and Cuban revolutions had to Mariátegui. Gonzalez also seems to portray Mariátegui as if he had recently been discovered when in fact his intellectual impact has been longstanding. Notwithstanding, this book does the important job of re-introducing one of the most important Latin American political (and Marxist) thinkers.