Marx & Philosophy Review of BooksReviews‘What Would Be Different: Figures of Possibility in Adorno’ by Iain Macdonald reviewed by Matthew Eckel 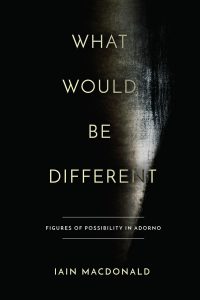 Iain Macdonald
What Would Be Different: Figures of Possibility in Adorno

Matthew Eckel is a PhD student in philosophy at the University of South Florida. His current …

Iain Macdonald’s What Would Be Different: Figures of Possibility in Adorno urges the reader to consider Adorno as a philosophically rigorous, essential thinker, a thinker simultaneously engaged with both the philosophical canon and the social crisis of modernity. Macdonald provides a compelling reconstruction of Adorno’s thought such that, not only is his participation in the German philosophical tradition consisting of Hegel and Marx made clear, but his affinity, and antipathy, toward Heidegger is brought into stark relief. While relating critical theory and phenomenology is somewhat of a third-rail in continental philosophy, given both the complex differences and the lack of responsible engagement between the two traditions, What Would Be Different offers a rich, sober and very much needed intellectual staging of this encounter. Given his background, Macdonald is one of the few intellectuals fit to accomplish such a study. In the end, Macdonald’s reconstruction of Adorno’s thought portrays the Frankfurt School icon as an essential twentieth century philosopher, one for whom, like Heidegger, the fundamental philosophical imperative of our time is to meaningfully think the different, to be able to think in such a way that does not reproduce domination, be it technological or ideological. Unlike Heidegger, however, Adorno’s thought of difference takes dialectical critique, futural liberation and the possibility of ameliorating human suffering at the material level as basic to the project of philosophy.

According to Macdonald, we understand Adorno best when we understand him as a systematic thinker who is interested in articulating how it is that certain programmatic political and normative goods are wrongfully considered impossible when they are, in fact, possible achievements. Adorno takes world hunger as an example: we have the productive and technical capacity to prevent world hunger, but collectively find such a goal impossible to ‘actually’ attain, so we fail to contribute to that end when we otherwise know we should. His analysis could just as easily apply to our own moral impotence regarding such impasses as climate change or nuclear disarmament. For Macdonald, Adorno’s thought is singularly focused on diagnosing how such ‘blocked possibilities’ are possible.

What Would Be Different shows that Adorno is enough of a student of Marx to note that such a situation is due entirely to the material conditions of society. However, deviating from traditional emphasis on practice, Adorno thinks that the analysis and resolution of the problem operates in the domain of theory, metaphysics to be exact. In essence, and this is the real thrust of Adorno’s thinking, we cannot break through our historical deadlock solely by disabusing ourselves of our theoretical and metaphysical, i.e. ideological, comportments such that we can finally rest on some fundamental principle or state of actuality which would then guide our practical commitments. Rather, it is the all-consuming metaphysical privilege granted to actuality itself, as ‘the way things really are’, that is the culprit. In order to unblock these blocked liberatory possibilities from within our given historical circumstances, taking nothing for granted, we have to rethink the modal categories of actuality and possibility in a way that exposes how fraudulent notions of actuality are falsely prohibitive of real possibilities. Put differently, Adorno attempts to offer us an insight into what ought to be different by articulating what ought not to be. The trick is avoiding, on the one hand, falling back into a concept of actuality which simply reproduces oppression in new terms, and, on the other hand, escaping to naive, fantastic utopianism. Macdonald’s reconstruction of Adorno’s thought shows how his philosophy tries to navigate between these dangers.

Of course, regarding these problems, the field of thinkers jockeying for position is crowded, to say the least. Macdonald recognizes this and makes a point to concisely bring Adorno into contact with thinkers like Lukács, Bloch and Benjamin, but wisely perceives that writing about Adorno’s relationship with these figures is an old hat. The important scholarly contribution of What Would Be Different is the depth with which it stages an encounter between Adorno and Heidegger as they respond to a problem rooted in Hegel’s metaphysics. The book’s central theme is that, while Adorno and Heidegger both regard Hegel’s concept of actuality as standing in the way of a new kind of thinking which is somehow the right response to the wrong social world we currently inhabit, the paths of the two thinkers diverge remarkably along the way. For Macdonald, Adorno’s critique of Heidegger is so philosophically robust that it cannot be dismissed. Still, as Adorno’s Marxian path away from Hegel places a wedge between himself and the phenomenological tradition, his vigilant refusal to leave anything untouched by dialectical mediation makes it so that no Marxist dogma is sacrosanct, specifically, traditional commitments regarding history and class.

Macdonald’s first task is to set the scene with a detailed chapter on Hegel’s metaphysical categories of possibility and actuality: the scene of the crime for Adorno. In essence, the rationality of Hegel’s system presupposes a kind of pre-established harmony where all possibilities are always already oriented toward a harmonious actualization in the whole process of history unfolding, a theodicy. For Hegel, the very notion of a possibility that is not preordained to become actual is a merely formal possibility, that is, a fantasy. If certain forms of moral progress are not attainable, so the thinking goes, so much the worse for such imaginative thinking. As world spirit marches on, all real possibilities prove their mettle by becoming actual, and anything possible is possible only insofar as the way things are, actuality, makes it possible. Actuality is prior; possibility is derivative. Adorno follows Marx in thinking that Hegel is offering a metaphysical justification for a deficient social reality, that Hegel is simply saying things could not have been otherwise when they not only could have been but ought to become otherwise. For Adorno, Madconald describes, Hegel is not Hegelian enough. If he were, he would have realized that the goal of his philosophy, ethical life, was contradicted by his commitment to actuality, that humanity could do better than settle with the ravages of bourgeois society. Adorno’s goal is to follow through with the dialectical negation before which Hegel stopped in his tracks as an apologist.

The problem is that social history materially fell to reification: the subsumption of all qualitatively non-identical things under conceptual categories which force identification upon them, making everything merely quantitatively different and therefore fungible, effacing all meaningful individuality and autonomy by making everything a commodity in an exchange economy. Macdonald concisely discusses four ways in which Adorno explicates this social logic: (1) the culture industry; (2) the existential tendency to turn alienation into a natural fact; (3) institutional regimes’ rational reproduction of labor power; (4) the deadlocked dogmatism of both conservative reactionaries and radical revolutionaries. Insidiously, each of these features of the prevailing social logic are predicated on the belief that they are socially efficacious practices in some sense, but that is precisely how real possibilities are blocked: by fetishistic submission to the immutability of the path forward which obscures the contingency of suffering and the real possibilities of liberation. Rather than providing real responses to our social situation which would promote progress, these aspects of our social logic preclude such progress, against themselves. A crucial upshot of Macdonald’s scholarship is how he shows Adorno’s theory of art, which is notoriously impenetrable, to be one of the ways in which we may get a glimpse beyond the confines of this social logic.

Adorno, however, is not entirely unique in this regard. What Would Be Different provides us with an essential, long neglected, philosophical and biographical examination of Adorno and Heidegger’s complicated relationship. Macdonald gives a very clean and effective summary of Heidegger’s philosophy as a whole, the way in which Heidegger’s project is similarly oriented toward thinking the priority of possibility over given actuality. Adorno does not limit himself to mere satirical abuse and well-poisoning in his writings on Heidegger, though he is guilty of such polemics. Adorno also consistently takes Heidegger seriously as a philosopher. This is because he thought that Heidegger was right in many ways, but made a fateful error: that which metaphysical thinking blocks (Being) itself blocks thought from its goal. Heidegger’s ontological identification of the originary with the good is entirely anathema to Adorno and dialectics. Heidegger ontologizes the ontic while fetishizing archaic, irrational origins; he naturalizes the fruits of wrong society: alienation, anxiety and ambiguity. Yet, no dialectician can say that someone got it all wrong. On account of their thorny proximity in thought, Adorno felt obliged to engage Heidegger from beginning to end, while Heidegger felt obliged never to reciprocate. Explaining just how and why this is so is Macdonald’s finest work in the book.

What Would Be Different is the culmination of an enormous amount of research, offering a valuable contribution to philosophy in that it provides a clear, non-partisan presentation of famously difficult thinkers from disparate traditions. Macdonald’s synthesis and framing of these ideas is admirable, minimizing editorialization, excluding the esoteric pedantry and the tribalistic feuding among secondary sources which plague academic work. The result is that the ideas speak for themselves, and the reader is afforded the opportunity to think them honestly yet without parental oversimplification. Should one take issue with the writer or desire more, Macdonald has provided enough references to last a lifetime. His care for these ideas is infectious. One should be under no illusions, however, that this is anything but a book about Adorno. The hero is not Heidegger. Though, neither is Adorno, exactly, and Macdonald’s refusal to sycophantically present Adorno as a champion is likely the best part of this book. If Adorno is right about the things he thinks about, he would be a prophet, not a philosopher, and nothing could be more offensive to a dialectician than unmediated revelation. Macdonald’s commitment to honoring Adorno’s consummate negativity in this way gives us the only kind of book of which Adorno would approve.