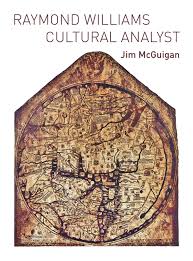 For everyone interested in the history of academic Cultural Studies in Britain and America and its contemporary issues, this book will be essential reading. Although one of McGuigan’s main themes, as he puts it in his Afterword, is the contrast between what Raymond Williams called ‘Cultural Materialism’ and the programme of the Birmingham Centre for Contemporary Cultural Studies (BCCCS), founded by Richard Hoggart and then led most notably by Stuart Hall, this is also a fine introduction to the post-WW2 political and social milieu of the field. McGuigan centres on Williams’s role as a cultural analyst rather than, say, cultural critic, which smacks too much of the nineteenth and early twentieth century tradition he so memorably analysed in Culture and Society (1958). Williams’ literary criticism is also more or less side-lined, although some of his dramatic criticism, particularly on the role of Brecht’s techniques of alienation and disruption, are most illuminating and serve to illustrate the fruitfulness of Williams’s interdisciplinary borrowings.

For possibly the majority of those engaged in Cultural Studies today Williams may appear to be something of a quaint throwback to the time ‘Before Theory’, while for those of us old enough to have been around at the time, it is hard to overestimate the liberating influence he had in the 1960s and 1970s. No self-respecting humanities teacher was without Penguin copies of Culture and Society and The Long Revolution (1963) on their bookshelves, usually alongside Richard Hoggart’s The Uses of Literacy (1958) and E.P. Thompson’s The Making of the English Working Class (1963). Together, they shaped the intellectual architecture of what Williams called ‘a structure of feeling’ that belonged to the ‘Old’ New Left in the decades following WW2. McGuigan however, deftly shows that Williams is not just an archaic figure of history but more than relevant to the contemporary situation, his ‘Plan X’ analysis of the 1980s being uncannily prophetic of the cultural fallout of the intensive global application of neoliberal economics over the last four decades.

The first part of McGuigan’s study therefore centres itself in a consideration of Williams’s analysis of the culture and society of the nineteenth and twentieth centuries, communications and democratic practices, the materialist conception of culture, technology and its effect on the production and consumption of drama, television and cultural form. McGuigan then turns to Williams’s social and political analyses and his role as a public intellectual, which form a piece with his cultural analysis. In this respect Williams follows a trajectory laid down by, amongst others, R.H. Tawney and G.D.H. Cole, his great adult education forebears, and continued by his contemporaries Hoggart, Thompson and Stuart Hall.

In his cultural analysis McGuigan notes Williams’s academic indebtedness to the literary and cultural traditions of the previous generation, especially to the disciplined ‘close reading’ of F.R. Leavis and the Scrutiny group brought to good books. He also paid close attention to the contextual readings of the work of Queenie Leavis and Lionel Knights in reading newspapers, adverts and other ‘popular cultural’ material (often practised in the adult education classes of the WEA). Williams’s stimulus for extending the analysis of culture from the ‘great works of art’ tradition of Matthew Arnold to the ‘whole way of life’ perspective of anthropologists like Ruth Benedict, was also the poet and critic, T.S. Eliot. In Culture and Society Williams offers due respect to Eliot as a conservative whom socialists cannot afford to ignore and Eliot’s Notes Towards a Definition of Culture (1948) was an important sounding board for his own responses.

There were, however, other academic ‘traditions’ that Williams, as McGuigan well shows, adapted to his own practice. One was the American practice of Communication Theory deriving from Dewey and Peirce’s approach of philosophical pragmatism. Williams however extended its emphasis from transmission to reception and also pluralised the concept. He was more interested in Communications as democratic practices which multiplied the sources of communication and gave greater attention to how their products were received and read. For McGuigan, Williams’s use of this adapted methodology to analyse TV, Radio, the popular press and advertising was path breaking. His demolition of the concept of the (tired but ever-present) belief in techno-determinism has immediate cultural importance, while his analysis of advertising as attempting to induce a form of magical thinking in the consumer has lost none of its original power.

Though occasionally pilloried for an alleged parochialism of ideas, Williams latterly owed much to his reading of the newly translated European (non-Soviet) Marxism of, for example, the Hungarian George Lukacs, the Italian, Antonio Gramsci and the structuralism of the Russian linguistic theorists Valentin Voloshinov and Mikhail Bahktin. From these sources he was able to escape the disabling economistic ‘base and superstructure’ model that had so crippled a previous generation of Marxist thinkers and move away from the idea of determinism to that of determination – setting limits and applying pressures – that allowed cultural analysis a relatively autonomous mode of practice. But he was not tempted to abandon the link to the material world altogether, as did a new wave of postmodernist intellectuals, and he developed his own practice of ‘cultural materialism’ – but never did he think of himself as simply a Marxist.

The Long Revolution to a large extent celebrates the social and political changes brought about by the Labour government of 1945-51 which, until Thatcher, were for the most part endorsed by successive Tory administrations. These included the massive extension of the welfare state and social security, the creation of the National Health Service (NHS), the consolidation of secondary education and the extension of Higher Education and the decolonization of most of the British Empire. Although the idea of the long revolution might seem to have been an accommodation with gradualist Labourism on Williams’s part, he became increasingly critical of Labour’s subsequent lack of radical aspiration and reluctance to break with the ancient regime that embedded wealth and privilege in the social structure. The long revolution seemed to have stalled. Williams became an acknowledged founder of the British New Left and for co-founder E P Thompson, ‘our best man’. Thompson seems to have acted as a spur to Williams’s thinking in this respect, having criticised Culture and Society as ignoring the aspect of political struggle in making democracy and being too kind to the ruling class in general and conservatives like Eliot in particular. Stuart Hall and others in the BCCCS later properly criticised his relative lack of interest in racism, imperialism and feminism.

Nevertheless, Hall and Thompson were with Williams co-collaborators in the May Day Manifesto of 1967 which set out a powerful critique of Wilson’s 1964 Labour government and laid down a socialist trajectory for left politics that was arguably a Third Way between revolution and reform. As McGuigan argues, May Day Manifesto was a serious economic critique and highly prophetic in showing how Labour’s tentative embrace of neo-liberal economics and subservience to finance capital would lead to gross levels of inequality, and increasing indifference to – and eventual loss of – its historic working-class constituency. Moreover, in what he called ‘Plan X’ in Towards 2000 (1985) Williams identified the anti-human consequences of the hard-nosed economics of neo-liberalism and its game playing logic derived from management theory.  The logic of this new political economy was simply ‘advantage’ but what broke the mould was the deeply pessimistic view of the future it incorporated, which accepted that none of the dangerous possibilities of nuclear war or ecological catastrophe could be reversed; what mattered was, simply, could a profit be turned? Its effect on popular cultural narratives was equally disturbing, leading to what Williams called: ‘these debased forms of an anguished sense of human debasement, which had once shocked and  challenged fixed and stable forms that were actually destroying people, have become a widely distributed  ‘popular’ culture that is meant to confirm both its own and the world’s destructive inevitabilities’ (quoted, 124). For the victims, especially the poor, the blame under this jurisdiction, was their own moral failings.  Prophetically, Williams described how this new form of capitalist instrumental rationality was not satisfied with simply increased extraction of value from the worker, but invasion of the whole personality and manipulation of desire.

Williams, and it is shared by McGuigan, was most unhappy with the way that Stuart Hall subsequently in his Marxism Today pieces seemed to accept much of this cultural and political domination, even accepting a kind of ‘cultural determinism’.  Whereas, in contrast to Hall’s evasion of political economy and ‘light-headed optimism’ (149) Williams calls for a renewed political agency uniting ecological and social movements in what he called a Green Socialism. And while ‘identity politics’ had made visible forms of oppression hidden by old-fashioned class politics analysis, it is clear that it has, in turn, obscured the intensified fatal injuries of class. More worryingly still, emergent neo-fascist politicians have, opportunistically, turned identity politics into a toxic nationalist ‘identitarianism’. McGuigan’s forceful introduction to Williams’s work, therefore, offers a timely revaluation at a moment when much of the truth of his analyses and predictions, in depleted lives and wasted potential, is all too visibly obvious.