Marx & Philosophy Review of BooksReviews‘When Workers Shot Back: Class Conflict from 1877 to 1921’ by Robert Ovetz reviewed by Achille Marotta 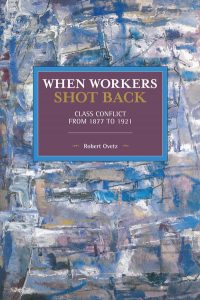 Robert Ovetz
When Workers Shot Back: Class Conflict from 1877 to 1921

Achille Marotta is an MSc Labour, Social Movements and Development graduate and editor of Notes …

When Workers Shot Back is a valuable study of labour violence in some of the most dramatic episodes of US working class history. By analysing these upheavals in light of class composition theory, Robert Ovetz illustrates the logic of sabotage, riots and guerrilla warfare as moments of escalation within a wider trajectory of class struggle. The author makes an impressive demonstration of the autonomist Marxist thesis that capitalist development is driven by class struggle. Through a careful reconstruction of workers’ struggles and elite responses, he demonstrates how mass rebellions spurred innovations in work, technology, repression and legislation, laying the basis for the labour-planning state typically associated with the New Deal.

While the book primarily treats historical material, the author asks us to see it as a work of theory (30), engaging with thinkers of insurgency and counter-insurgency, including Lenin, Fanon, Arendt and relative deprivation theory. Most importantly, Ovetz adds a class lens to the sociological framework of Charles Tilly, according to whom insurgents select their tactics from a “repertoire of contention”. In order to decide which tactic to deploy from their repertoire, rebels study “the conditions in which they struggle, their level of mass support, and the balance of power” (12). Arguing that Tilly’s general theory of contention “lacks a class analysis” (14), Ovetz draws from autonomist Marxism to introduce class composition as an additional determinant of forms of insurgency. A specific set of class relations, he argues, calls for a specific set of tactics.

To demonstrate this link between political violence and class composition, When Workers Shot Back delves into six key episodes of labour upheaval. Parts 1 and 2 deal respectively with the railway strikes of 1877 and 1894, and take up more than half of the book’s 600 pages. The third and longest part of the work presents four struggles at the beginning of the 20th century: the 1905-1910 iron workers’ bombing campaign, the wave of wildcat strikes during WWI, the 1919 Steel and Seattle general strikes, and the 1921 ‘redneck’ miners’ army. Ovetz reinterprets these struggles through a broad number of existing studies, while also dusting off some important primary sources. Each cycle of battle is studied in terms of tactical escalation, followed by an analysis of the innovations it forced onto forms of exploitation and government.

Ovetz begins with the 1877 railway strike, the “calling card for the arrival of the self-organised industrial workers willing to escalate the intensity of their tactics” (36). Enjoying mass support, hundreds of thousands of workers organised in armed “violent mobs” struck, sabotaged railway property and engaged in guerilla warfare against state militia (36). The 9-day upheaval paralysed the national economy, reaching its apex in the ‘American Paris Commune’ of St. Louis and East St. Louis, strike committees controlled the cities for a few days (91). The author demonstrates how workers used the railways to their advantage, shutting down this sector to block accumulation on a national scale. He also shows the limitations of this composition, as striking the railways interrupted the sole source of news and communication in the hands of the insurgents (124). Ovetz reiterates Du Bois’s analysis of white workers’ racism as a cause of the movement’s defeat (154).

Whereas the previous role of the state had centred on the genocidal expropriation of Native Americans and the transfer of their lands to the railway companies (39), the upheaval of ‘77 compelled the government to play a more direct role in the management and repression of class struggle. This capital recomposition included the expansion of the court system, the formation of a National Guard composed of well-to-do citizens (154), the industrialisation of policing (156), the application of new academic fields of industrial relations and human resources to the railways (175), as well as the consolidation of capital both within the railway industry and across supply chains (178).

A similar structure and method of analysis is followed in Part 2 of the book, which deals with the 1894 railway strike. Ovetz places the struggle in the context of continuing attempts at working class recomposition, such as the 8-hour-day movement of 1886 and the Industrial Armies of the Poor. He provides a rank-and-file history of the 1894 revolt, starting from the self-organised strike in the infamous factory-town of Pullman, Illinois. He shows how the rank-and-file of the American Railway Union (ARU) developed the strategy of boycotting Pullman cars, and enforced it against the will of Eugene Debs and the rest of the ARU leadership, who “feared it could trigger a revolution” (291). The boycott quickly turned into a national strike, shutting down much of the economy and pulling in the participation of hundreds of thousands of non-unionised workers, who escalated their tactics to include sabotage and armed self-defence.

In demonstrating how this movement drove elites to develop the labour-planning state, Ovetz gives a nuanced view on the relationship between insurgency and reform. Particularly interesting is the US Strike Commission’s endorsement of a “labour relations policy that would manage and dampen the impact of class struggle”, four decades before this would be realised in the New Deal legislative programme (309). The author also looks at changes that took place within the companies themselves, showing how standardisation and labour-saving technology kicked out rebellious workers and deskilled them further into interchangeable industrial labourers (317-318). Ovetz argues that the introduction of seniority and corporate welfare schemes were introduced to reduce labour turnover, which had been the material basis for workers’ networks across the industry. The introduction of reference letters and disciplinary records also isolated and punished insolent workers (320).

Part 3 of the book deals with four crucial proletarian insurgencies of the early 20th century. Chapter 7 tells the story of a small craft union – the International Association of Bridge and Structural Iron Workers (IABSW) – and its leadership’s ‘dynamite conspiracy’ which sought to provide leverage in negotiations with an increasingly monopolised iron industry. This presents an opportunity for Ovetz to criticise ideological and ahistorical analyses of tactical violence put forward by the state, media, and the “global cottage industry of anti-terrorism experts” (366). Chapter 8 turns back to mass rank-and-file action with the emergence of a wave of wildcat strikes during WWI, when the “dual vulnerability” of massified assembly line work and war production made “strikes more disruptive than ever” (374). In response, the state introduced the National War Labor Board (NWLB), a short-lived institution which could arbitrate and enforce wage increases to get workers back on the job. In Ovetz’s analysis, the NWLB continued the restructuring project which had begun in 1877, but introduced a novel element: “the integration of the AFL into the labour-planning state and government-mandated arbitration, which presaged government-mandated collective bargaining” (371).

Chapters 9 and 10 deal with two revolutionary high points of US labour history: the Steel and Seattle general strikes of 1919, and the West Virginia miners’ army of 1921. In Seattle, workers were able to bypass violent tactics by taking over industry and running the city under their control, “carving out an autonomous space where they could exercise their multiple visions of what life could be like” (473-4). In West Virginia, miners bypassed union leadership and escalated their tactics to the point of building an army of thousands. Not only did the ‘rednecks’ – named after their red neckerchiefs – engage in pitched battles against lawmen and scabs, but they “controlled the territory and roads, ran some trains, organised medical care, the food supply and security” without any centralised authority (516). More than focusing on elite responses to these struggles, Ovetz uses the red years of 1919-1921 to criticise Tilly’s framework of insurgency, whose cost-benefit analysis assumes “that the only rational decision is when to de-escalate, not whether” (548). These cases of revolutionary crisis, where workers chose escalation even when it posed higher costs than de-escalation, allow Ovetz to counter Tilly’s theory of contention with the possibility of revolutionary rupture.

Ovetz’s contribution to our understanding of class struggle is twofold. Firstly, he masterfully demonstrates the autonomist Marxist thesis that forms of capitalist development are determined by working class struggle. Anglophone readers who have been introduced to Italian workerism through the recent (and long-awaited) translation of Mario Tronti’s Workers and Capital will find a concrete demonstration of those ideas in When Workers Shot Back. Secondly, by placing labour violence in an analysis of class composition (another category derived from Italian workerism), Ovetz unveils the logic behind workers’ self-organisation and tactical escalation. On one hand, this provides useful munitions to counter idealist visions of violence, such as those espoused by state and media discourses of ‘terrorism’. On the other hand, the author criticises those historians and scholars – like Philip Foner – who underplayed certain struggles for lacking formal organisations and an “identifiable class consciousness” (133).

Unfortunately, for reasons of scope and sources, Ovetz does not give an alternative analysis of workers’ own, ambivalent, yet subversive forms of consciousness. One limit he has posed himself, then, is his reading of workers’ struggle ‘from above’, and the omission of another key aspect of workerist theory: the question of subjectivity. The author has left it to historians to uncover the shifting mixture of belief systems, customs, and identities – in part functional to capital accumulation – whose ambivalence makes revolutionary consciousness possible (Alquati 1994:22). Instead, in its endeavour to counterbalance idealist theories of violence, the book portrays an almost calculational working class, whose actions are decided by a weighing of risks and opportunities. This becomes crucial in the attempt to explain situations in which workers escalate with violence in spite of the enormous risk of doing so. Speculating on the miners’ army, one of Ovetz’s suggestions is that in such cases insurgents may be “seeking to preserve something intangible that they already possess or assert something intangible that they lack. […] The killings of despised local sheriffs and deputies in self-defence represented a parallel system of class justice” (546). We thus see that military-tactical issues may be overridden by notions of class hatred, revenge, or justice: forces which need not be ignored by a materialist theory of revolution.

Nonetheless, When Workers Shot Back provides a useful jumping board for such inquiry into working class subjectivity. Throughout the book, Ovetz makes passing references to a number of aspects of subjectivity, including the role of craft identity and the identity of the mass worker (97, 374); revolutionary traditions and tactics derived from African-American and European experiences of struggle (135, 449); the limit posed by white racial identity and its potential points of rupture (92-93); and the repeated influence of patriotism in armed struggle as well as in de-escalation (151, 236, 522). Each of these points deserve fuller expansion, if not to uncover this most tumultuous period of working class history, then to offer a useful compass for the tumults of our own time.