Marx & Philosophy Review of BooksReviews‘From Marx to Hegel and Back: Capitalism, Critique, and Utopia’ by Victoria Fareld and Hannes Kuch (eds) reviewed by Damian Winczewski 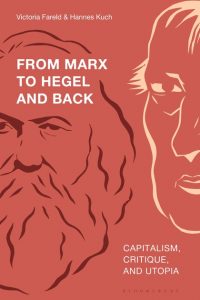 Victoria Fareld and Hannes Kuch (eds)
From Marx to Hegel and Back: Capitalism, Critique, and Utopia

Damian Winczewski is a doctor of philosophy from University of Szczecin. He holds also master of …

This book is a collection of essays on various aspects of Hegel and Marx’s philosophy, whose common goal, according to the editor’s aspirations, is to initiate a new trend in the studies of the relations between these two great philosophers. The editors rightly postulate to go beyond the anachronistic, scholastic debates known from the last century, which were focused on determining to what extent Marx’s thought was based on Hegelian philosophy, and on the search for materialistic or ‘proto-Marxist’ elements in Hegel’s philosophy itself.

In other words, it means leaving aside historical disputes involving radically different interpretations of the relationship between these philosophers, as exemplified by the works of Althusser and Lukács. The approach proposed is aimed at showing the possibility of mutual complementarity of Hegelian and Marxist philosophy. As a result, we should strive to a unify ‘the ethical content of Hegel’s philosophy with the explanatory power of Marx’s social and economic critique of [the] contemporary world’, thereby making possible to ‘critically examine our own contemporary situation’ (2). With this approach, it would be possible to purge Marxism from ‘economic dogmatism’ and radicalise the conservative parties of the Hegelian system (11). The assumptions made by the editors seem to be correct because a New Hegelian Marxist approach is intended to enable critical contestation of our contemporary world (11), and so indicate possible ways out of the capitalist reality.

Unfortunately, despite these aims, the volume is instead another loose collection of essays with varied content, and only a few of them fulfill the ambitious demands described above. The first part focuses on evaluating the legacy of both philosophers from a contemporary perspective. The opening essay by Axel Honneth is a summary of main themes from his other works. This most prominent contemporary representative of critical theory characterises Marx in a manner typical of various post-Marxists (like Laclau and Mouffe), presenting him as a crude economist who underestimated the importance of political institutions. In this way, Marxism is reduced to a criticism of capitalist economics, which Honneth believes should become a component that could extend perspectives of Hegelian social theory and dynamise it (50). This kind of merger is intended to make possible the criticism of contemporary capitalist society for failing to meet the conditions of Hegelian ‘ethical life’, and normatively justify the demand for its broader reform. So basically the ‘originality’ of Honneth’s theses is conditioned by his vulgar interpretation of Marxism, which is already denied in the next essay by Emmanuel Renault, who cuts himself off from the representations of Marx as a vulgar economist (66). Renault presents both Marx and Hegel as primarily philosophers of their contemporary reality. Jacob Blumenfeld, on the other hand, stresses that Marx’s vision of non-capitalist reality is a proper realisation of the Hegelian concept of freedom (87). The first part ends with Frank Ruda’s essay on the presence of the Hegelian language style in Lenin’s political writings, which proves deep theoretical insight for the Bolshevik leader, who was aware that ‘language is no neutral medium of communication’ (99). The problem is that, although Ruda’s essay is interesting, it is nothing like the rest of the contributions in the collection, and it remains unclear as to why it is there. The detailed arguments of Honneth, Renault and Blumenfeld on the assessment of Hegel and Marx can be agreed or disagreed with; unfortunately, they do not say more than the classical Hegelian Marxist interpretations, that going beyond the reality of free-market capitalism is a condition of ‘ethical life’, ‘mutual recognition’, abolition of alienation, etc.

The second part is devoted to Hegelian Marxist social philosophy as a ground for contemporary critical theory. Unfortunately, the essays here have a somewhat secondary character. Rocío Zambrana’s opening essay boils down to the fact that the sources of critical theory and the concept of ‘immanent criticism’ can be found in the Hegel’s Phenomenology of Spirit and the Marxian analysis of alienation and commodity fetishism (112-118). Much more interesting is the chapter by Frederick Neuhouser, who finds kinship between Hegel and Marx not so much in naturalistic or economic threads as in the correctly understood ‘spiritualism’ of both thinkers. This claim is based on the profound spiritual dimension of social life emphasised by these two philosophers. In so far as the use of the term ‘spiritualism’ to refer to Hegel and his dialectics of lordship and bondage and his analyses of social life contained in Elements of the Philosophy of Right is not much of a surprise, it is otherwise with Marx. Neuhouser, unlike Honneth, rightly sees that Marx’s vision of post-capitalist reality begins where the sphere of material production ends and is the embodiment of a ‘quasi-Kantian ideal of freedom – activity that is completely undetermined by natural ends’ (126). This thesis is based on an interesting interpretation of Marx’s criticism of political economy as a humanistic postulate for a real socialisation of work as a way of social organisation, which aims at ‘collective good, including the material needs of each member of a society’ (139). However, the essay can also be boiled down to a reconstruction of the most famous fragments from Phenomenology of Spirit and Capital. The same issue is present in Sven Ellmers’ contribution, which offers the reader a tedious reconstruction of the Marxist division of concrete and abstract labour in order to conclude that the Marxist understanding of the employment relationship in capitalism can be complementary to Honneth’s theory of recognition (155). This part of the volume is crowned by an essay by Federica
Gregoratto on the real character of erotic love in capitalism, which seeks to undermine the dominant view in contemporary social philosophy that erotic relations are autonomous from other social spheres (161). Based on excerpts from Marx, Engels and Hegel, she proves that erotic love in capitalism is politicised (171) and connected with other social spheres through a strong presence of issues related to private property in love relationships (169) and its general connection with the sphere of capitalist production.

The aforementioned aims of the volume most starkly appear within the third part, devoted to visions of post-capitalist social order. In the first part, David Leopold convincingly criticises Marx’s reluctance to present a broader vision of what society should look like after the abolition of capitalism, while accurately presenting the sources of this reluctance, i.e. the heated polemics of the German philosopher with various representatives of ‘utopian socialism’. The author notes that this reluctance of Marx was also due to his conviction that all attempts to plan a future social order are ‘anti-democratic’ by definition (184). It links Marx’s attitude to Hegel’s assumptions that philosophy cannot anticipate the future, but can only critically analyse its past and present. What is more, both thinkers have in common the assumption that there is no point in designing the future, because it is already born within the current historical process (191). However, the author remains critical of such aversion towards designing the future and utopianism. He rightly notes that there is nothing fundamentally wrong or antidemocratic in trying to give a general outline of what the future could or should look like. It can be added to this that the reluctance of Marxists to anticipate to what a post-capitalist future ought to look like was the source of many practical ills of the socialist movement. It is enough to mention, for example, the difficulties encountered by the Bolsheviks in the Russian revolution. Without any answers from Marx and Engels, the Russian communists were forced to improvise, laying the foundations of a socialist system. The very existence of the economic system of the Soviet Union was more or less an imitation of existing capitalist solutions, a dimension largely responsible for its collapse – the idea of a centrally planned economy was originally copied from the war-torn economy of Kaiser’s Germany and ideas on productivity derive from the Fordist production regime, which were implemented later.

The authors of subsequent essays are well aware of the problems outlined above. Eva Bockenheimer presents interesting interpretations of contemporary managerial capitalism by analysing the growing process of employee participation in the management of capitalist companies. The fact that today there is an attempt to blur the differences between employees and capitalists does not have the same negative implications as the increase in responsibilities and self-exploitation of workers. Bockenheimer also points out that, as Marx predicts, this could also mean a growing socialisation of the economy, implying the need to go beyond capitalism (206-207). Hannes Kuch’s contribution is also essential in this context, as he has an excellent knowledge of contemporary radical political economics and considers three possible alternatives to capitalism: commons economy, democratic planning and market socialism. However, being aware of the significant drawbacks of the latter solution, he nevertheless points to it as the most optimal in terms of both economic knowledge and compatibility with the Hegelian philosophy of freedom. A similar position is taken by the last author, Michael Nance, who justifies the normative validity of market socialism based on Honneth’s philosophy.

To conclude, most of the essays in their interpretation of Marx’s philosophy do not depart too much from the classic Marxist Humanism, revolving mainly around ethical issues, with the vision of a ‘Kingdom of Freedom’ at the forefront. As in older works of this trend, most authors focus exclusively on the exegesis of the works of the young Marx and a few fragments of Capital, without going deeper into the rich legacy of the German philosopher. What is striking is the total absence of reflection on the theory of revolution, as if the question of the revolutionary transformation of social reality, which is a crucial element of Marx’s philosophical originality, did not exist or was not even relevant. Nevertheless, the authors of the above essays are aware of the need to go beyond capitalism. However, when discussing systemic alternatives, they seek legitimacy in Hegel for the concept of ‘ethical life’ and ignore the complex Marxist research on something like a ‘transitional period’. In this way, they castrate Marxism from its most essential motifs, turning it into an abstract theory of human freedom legitimising the reformist approach. Therefore, the book can be seen as a source of knowledge about contemporary critical theory, but unfortunately, it does not bring much progress in research on the philosophy of Marxism.