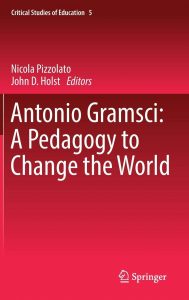 Anne Freeland teaches at the City University of New York. …

This volume brings together essays on the value of Antonio Gramsci’s thought for critical and revolutionary pedagogy. The introductory chapter by the editors, Nico Pizzolato and John D. Holst, contextualizes the collection within the existing literature, noting in particular that it seeks to bridge a divide between Gramscian scholars interested in passages on education and educational theorists who draw on Gramsci in elaborating their conceptual frameworks. While this split remains evident in many of the essays included, the contributions from each side, singly and collectively, make a strong case for understanding educational practice and policy as always integral to larger social processes, and for understanding social change as thoroughly educational in a sense that is not merely analogical; as Gramsci writes in a passage cited by several of the contributors, ‘every relationship of hegemony is a pedagogical relationship.’ The editors also note a dearth of contemporary scholarship on the topic in English from Latin America and Italy, which the volume helps to address. The rest of the book is divided into three parts: Part I focuses on Gramsci’s pedagogical thought, Part II is comprised of comparative studies and case studies in educational policy and movements that make use of Gramscian concepts and the essays of Part III each consider Gramsci’s political and philosophical project as a pedagogical project through the prism of a different key concept in his theoretical edifice.

In the first part, Peter Mayo contests the view of Gramsci’s advocacy of rigorous and disciplined schooling as conservative (addressed most prominently by Harold Entwistle), emphasizing the importance for critical pedagogy of effectively transmitting ‘knowledge which can provide access to power’ (46). Riccardo Pagano focuses on Gramsci’s opposition to the educational reforms proposed by Giovanni Gentile in Italy in 1923, which split the secondary school system into vocational and classical tracks. Beyond the important and obvious objection that the two-track system solidifies the class division, Pagano argues that in Gramsci’s philosophy, instruction and education (that is, the technical or practical and the intellectual or philosophical) are inseparable elements in the construction of a worldview, and therefore of the individual and collective subject of a socialist society. Diego Fusaro frames his discussion of the pedagogical nature of Gramsci’s Marxism through its differentiation from a cruder economic determinism, and concludes by drawing connections to the present neoliberalization of education as both the destruction of public institutions and the devaluation of a humanistic, non-instrumental conception of knowledge. Each of these texts highlights two essential principles of a Gramscian theory of education in and for democracy: equality and the centrality of a humanistic curriculum imagined as integral to the development of the citizen and to the collective construction of culture. These twin imperatives are no less timely today, as unequal funding and neoliberal ‘school choice’ policies deepen stratification, and the dismantling of the humanities continues.

The second part opens with a comparative essay on Gramsci and the Chilean communist organizer Luis Emilio Recabarren by María Alicia Vetter and John D. Holst. Vetter and Holst warn against unexamined assumptions of influence from more metropolitan contexts towards more peripheral ones, or, in this case, the lamenting of a possible ‘failed encounter’ between the two. The authors highlight parallels in Gramsci’s and Recabarren’s intellectual and practical activity, centered on the tactical use of electoral politics, always subordinate to a larger strategic objective that lies beyond bourgeois parliamentarianism, and they attribute these parallels to similar historical and political conditions in Italy – on the periphery of Europe – and Chile, in the Southern Cone of South America, which was relatively industrialized in comparison to the rest of the continent. Rebecca Tarlau offers an analysis of the educational initiatives of the Brazilian Landless Workers Movement (MST), which operates within the public school system, as an instance of the Gramscian war of position that must be fought within the social institutions that are at once the armor of the ‘integral state’ and the terrain on which the struggle for hegemony is waged. In a sociolinguistic study of English as a global language in Italy, Alessandro Carlucci turns to Gramsci’s notes on language to argue that an ‘abstract cosmopolitanism’ of the left that ignores disparities in access on the ground, in our current political climate, can only reinvigorate a nationalist populism of the right. Finally, Flora M. Hillart, focusing on Argentina, poses the question of the subjective and objective class position of teachers. While Hillart does not espouse an economistic class determinism and favors instead the broader, more political ­– and necessarily thorny – concept of the people (pueblo), she concludes that the category of the ‘middle class,’ in which most teachers situate themselves, does not properly correspond to a structural class position at all and thus obscures social relations, reinforcing subjective divisions between teachers and working class students. While the first part of the book generalized from Gramsci’s notes on education, situating them within his larger theoretical project, this second part makes the opposite gesture of activating concepts that originate elsewhere – the war of position, the organicity of intellectuals, cosmopolitanism – in addressing a range of problems in education, demonstrating their transferability across time and space as well as across disciplinary boundaries.

In the third part, Andrè Tosel analyzes the pedagogical/hegemonic relation through the frame of the dialectic of the individual and society, highlighting that both hegemonic leadership and education require ‘not the exaltation of spontaneity but […] education towards an accepted and rigorous discipline’ (183). Again, this relationship is not merely one of analogy, but rather ‘the formation of the personality [is] a form of transformation of the social’ (184). Pietro Maltese considers the question of Gramscian pedagogy through the lens of the concept of the subaltern. He makes the important observation that subalternity can be a position in relation not only to domination but also to leadership; in this sense it is not a condition that can ever be eradicated, but is rather a constitutive part of any educational activity. A key question relevant to both political leadership and education proper, then, is that of how to approach subaltern knowledge without paternalism or condescension. For Maltese, the answer that Gramsci offers to this question is that subaltern knowledge – or ‘folklore,’ or ‘common sense’ – is to be taken seriously as a conception of the world, even when the objective of the educator or organizer is to transform that conception. In the final chapter, Holst and Stephen D. Brookfield propose as the central principle of Gramsci’s project the concept of catharsis, the passage from the merely economic-corporative to the ethico-political. This is the same principle that underpins any education for social justice that has as its objective the development of subjects capable of autonomous political and social action and thought.

Of the conceptual cornerstones that recur in multiple chapters, with different emphases and applications, perhaps the most important is the relationship between spontaneity and direction, corresponding, in Bertoni Jovine’s terms, to a distinction between freedom and autonomy (3). Behind Gramsci’s objection to a neo-Rousseauian ‘natural’ education, which would facilitate the free expression of an innate personality, is his insight that what is deemed natural is always in fact ideological, and here a defense of nature is a defense of the status quo. Gramsci’s critique of pure spontaneity merits close attention in this context because the reflexive tendency of contemporary progressive thought is to assume that the ‘common sense’ of the subaltern subject of education is, on the whole, counterhegemonic. Gramsci reminds us that this assumption needs to be examined. This critical stance in relation to ‘common sense’ takes on particular importance within the current global climate of rightwing populism; educators who want to fight this tendency must not merely oppose the spontaneous expression of one ‘common sense’ with another.

A return to Gramsci’s texts is also valuable for the field of education as a corrective to the subsequent development of his thought in theorists like Louis Althusser and Pierre Bourdieu. In Althusser’s notion of the school as an ideological state apparatus, or in Bourdieu’s exposition of the operation of cultural capital, the concept of the integral state is simplified into one whose institutional and cultural terrain is effectively uncontested. The authors of this volume (Maya, Tarlau, Hillert) insist instead, following Gramsci, that the institutions of the state (including the private institutions of civil society as its extension), are necessarily sites of struggle between existing and emergent forms of consciousness. This hypothesis that educational institutions which by design reproduce the class structure can and must be transformed from within has profound significance for radical teachers at all levels, from primary to postsecondary education.

As a whole, the book succeeds in establishing a dialogue between Gramscian theory and critical educational thought through which the former not only serves to bolster the theoretical framework of the latter; the lens of the pedagogical relation can in turn enrich our understanding of Gramsci’s Marxism. We know that education is political; the more contentious claim, which this book advances effectively, is that politics is necessarily educational.