Marx & Philosophy Review of BooksReviews‘Life Itself Is an Art: The Life and Work of Erich Fromm’ by Rainer Funk reviewed by Jarno Hietalahti 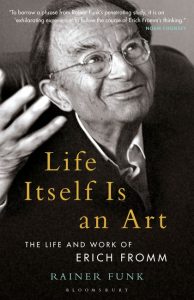 Rainer Funk
Life Itself Is an Art: The Life and Work of Erich Fromm

Jarno Hietalahti is a University Teacher at the University of Jyväskylä, Finland. In his doctoral …

Erich Fromm (1900-1980) was one of the great Freudo-Marxist thinkers of the twentieth century. His style of writing was both engaging, loving, and critical – and wide audiences adored it. To date, his publications have sold tens of millions of copies (e.g. Escape from Freedom, The Art of Loving, To Have or to Be?). But despite this popularity, little by little Fromm became a something of a ‘forgotten intellectual’, as Neil McLaughlin has claimed. Recently, however, there has occurred a nascent renaissance in the international reception of Fromm. The newest addition to the scholarly field on Fromm is Rainer Funk’s Life Itself Is an Art.

In this work Funk gives an introductory view of Fromm’s psychoanalytic thinking. Funk, who worked as Fromm’s last assistant and is now the director of the Erich Fromm Institute Tübingen, has made a noteworthy career as a psychoanalyst himself. His background shines through the pages. According to Funk, Freud is the key starting point if one wants to understand Fromm’s works. Funk admits that Jewish thought, Marx’s ideas and Zen Buddhism all are relevant aspects in Fromm’s theories, but he nevertheless decides to emphasize psychoanalysis in this book. He even throws little jabs to other disciplines when claiming, for instance, that Fromm ‘made [only] few friends among the sociologists’ (53) because of his sociopsychological approach did not match with the sociology of the era.

As important as Freud’s theories are for Fromm, he is at least equally eager to criticize Freud. Funk makes a convincing case when he goes through Fromm’s writings from the 1930s onwards, showing how in the early years of his career Fromm made an attempt to update Freud’s stuffy ideas about drives and impulses. Funk argues that for Fromm, a human being is always a social being, and, in opposition to Freud, that the libido cannot dictate the outcome of an individual’s life. People need to be related to each other, and the forms of relatedness are what matters in how they end up living in a society. One can submit to others, or try to subordinate others, or preferably, try to build a productive, life-affirmative relationship towards others and to oneself.

Briefly put, the guiding theme of the book is how people could encounter each other directly without being preoccupied with their social esteem and such like. If one is to master the art of living, the key question is how to see the other as a human being, not just an outsider or object. Fromm famously claims that ‘man is not a thing’, but a unique human being who needs to be loved and recognized.

Funk is especially interested in Fromm’s concept of social character. In short, social character explains why people want to do what they need to do to keep the society running as it is. It is the mediator between material basis (e.g. economic resources) and ideologies (e.g. socially shared values). Fromm realized that people have a tendency to internalize the needs of their social surroundings; a capitalist society needs people who are willing to spend money on every new product, whereas a medieval society would prefer citizens who are willing to submit themselves to the classes into which they are born. At times, when the social reality does not match the ideologies, social character may start to work as dynamite. So, it is a dynamic force, which typically molds personalities fittingly and tries to keep the society intact, but which during crises, can serve as a force for societal change. Because there are always competing forces and tendencies in a society, there are different kinds of social character orientations, too. Fromm himself analyzed among others exploitative orientation, marketing orientation, hoarding orientation and productive character orientation.

Instead of offering merely a review of Fromm’s theory, Funk introduces his own theoretical insights, demonstrating how the theory of social character has been developed during the last couple of decades. He does mention other Fromm theorists like Michael Maccoby (and his idea about interactive social character) but focuses mainly on his own research.

According to Funk, the new way to internalize the social demands can be denoted by the notion of ‘the ego-oriented character’. Funk writes: ‘To live autonomously, ego-oriented people consistently avoid limitations and predetermined boundedness to something or someone; they are oriented around their own ego.’ (129) These are people who prosper in the era which Zygmunt Bauman calls the liquid modernity. According to Funk’s analysis, the ego-oriented character orientation represents a new kind of freedom. This is especially clear in the virtual reality, where people mold the world according to their will. Human relationships become easily artificial, and there is a tendency to perform feelings, for instance, via emojis. Funk goes even further and claims that human relationships are actually replaced by shallow sociability. Traditional emotional ties do not matter as much as they used to, and people focus on autonomous connections which avoid all the emotionally heavy aspects of relationships. ‘This different art of relating means that ego-oriented people never hold a grudge and, despite the collapse of partnership, remain friends with their exes. Jealousy is usually not an issue. Sexually, it is important to feel free and to actualize oneself. Everything is permitted, including abstinence.’ (132)

According to Funk, this ego-orientation is hardly a productive nor a loving way to relate to reality, to others or to oneself. If one is to encounter people directly, he or she should understand that these occasions can be difficult and potentially fractious. In deep personal relationships, people do not need to agree on everything, and certainly ought not to seek to avoid conflicts at all costs. Even in a loving relationship, there has to be room for differences in opinions. Human relationships are sometimes painful, but one should not shrink away from them. Instead, this type of encountering requires that the person is ready to encounter their own darker sides.

Following Fromm, Funk suggests that to encounter oneself directly, the preferred pathways are psychoanalytic therapy, personal love relationship, political action, personal connections to friends and self-analysis. The last one is especially important because it offers an opportunity for a depth experience of oneself, and possibility to a profound change in personality.

For a non-psychoanalyst reader it remains somewhat unclear what this self actually is and who is the one encountering it. In addition, why do people need psychoanalysis to encounter oneself and others directly? Being engaged in psychoanalytic tradition, Funk describes how he met Fromm for the first time, and after hours of discussion, how he left feeling lively and energized – just like after a successful psychotherapeutic session. But why cannot the tables be turned around? Could it be that therapy in its best form is just as inspiring as a rousing meeting between two friends? Furthermore, it remains unclear why self-analysis is more important than, say, self-reflection. In short, the reader may not be entirely convinced that they need to start psychoanalytic practices to master the art of living.

In regards to the overall framing of the book, Funk has made some interesting decisions. For instance, his choice to relegate Marx to the margins of the work is intriguing. Naturally, Funk admits that, biographically speaking, Fromm was first engaged with Marx and Freud came into the picture only afterwards. In Fromm’s sociopsychological thinking Freud gave flesh to the Marxist bones, so to speak. But Marx’s role should not be belittled. In his intellectual autobiography Beyond the Chains of Illusion (1962) Fromm clearly admits that Marx is much more humane and comprehensive thinker than Freud. Fortunately, the younger generation of Fromm researchers, like Joan Braune and Kieran Durkin, emphasize Marx’s influence on Fromm. Perhaps it is safe to say that Funk’s new work complements the general view on recent Fromm studies, as the clinical Fromm is often handled in a minor way. In this aspect Funk has done an important job, because Fromm wrote only a couple of articles about psychoanalytic treatment and practices. Even so, the reader should be aware of the fact that the psychoanalytic Fromm is not the whole story.

For a contemporary reader, there is a nagging stylistic flaw throughout the book. Funk has clearly chosen to adopt the gendered noun ‘man’ as a descriptor for human beings in general. He argues that this choice is in line with the way that Fromm used the very same term. This is certainly true, but the argument hardly entices potential new audiences to Fromm studies. In short, surely we can agree that the term ‘man’ is unfortunately outdated. An update on the choice of words would actually serve Fromm’s legacy in a deeper sense, because he was highly critical of how people use language and how reality is built through words (c.f. To Have or to Be?). Nothing essential is lost in translation if one prefers, for example, words like ‘human being’ or ‘human’ instead of ‘man’. They actually show more compassion.

Despite the few flaws mentioned above, Life Itself is an Art is a great introduction to Fromm’s psychoanalytic thinking, and it offers a prominent survey of the recent applications of Fromm’s theoretical work. Funk’s personal tone and warm memories about Fromm are a healthy reminder on how humane a person and social critic Fromm was. For those who want to delve deeper on Fromm’s legacy, Funk’s earlier book Erich Fromm: The Courage to be Human (1982) is still the most comprehensive and important source.