Marx & Philosophy Review of BooksReviews‘Considering Class: Theory, Culture and the Media in the 21st Century’ by Mike Wayne and Deirdre O’Neill (eds) reviewed by Ufuk Gürbüzdal 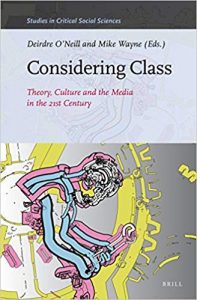 Ufuk Gürbüzdal is an independent filmmaker and a researcher in critical culture and media studies. …

Considering Class is a highly beneficial source of intellect for both learners and researchers of Marxist class theory, especially those whose interests lie with contemporary analyses of culture and media. The book consists of three sections which are respectively Class Theory, Class and Culture and Class and the Media. The first section is dedicated to articles re-assessing the validity of Marxist class theory as a methodology to comprehend the current social phenomena. It consists of six articles research subjects of which vary from the examination of dynamics between social class and education to the analysis of consequences and implications of social and geographical segregation by class. The following section is comprised of six articles which mainly concentrate on culture’s impact on workers’ perception of their own social positions and identities. Accordingly, most of the articles in this section donate prescriptions to enhance class politics in the current state of the world in which cultural references predominantly override class positions regarding the workers’ self-perception. Lastly, the final section brings together five articles which chiefly tackle the representation of the working class in cinema and television.

The first section, namely, Class Theory, begins with Choonara’s article named Class and the Classical Marxist Tradition. In order to check the validity of the recent post-Marxist retreat from class due to the so-called structural changes within the current form of capitalism, he recommends a return to such classical Marxist concepts as relations of production and class consciousness. Choonara reminds the main principles for which the proletariat has a distinct status in the construction of a new society; these include its numerical superiority as a class and its ultimate indispensability in the reproduction of human society. Accordingly, he argues that “interdependence of capital and labour … distinguishes exploitation from oppression” (19). Moreover, for him, gender- or race- based oppression does not in itself embody the means to fully liberate the oppressed whereas exploitation as a labour-capital relation does (ibid.). In his critique of technological determinist arguments or identity based political strategies, Choonara comes to praise Marxism’s faculty in exposing formative complexities of capitalism and stresses its historically proven potential as a powerful point of reference for collective movements seeking social change. In an epoch in which social problems inherent to capitalism severely intensify and give rise to new pathways to popular resistance, Choonara’s article is an invitation to consider social changes in terms of class politics. Another remarkable article within this section is The ‘Secret’ of the Restoration: Increased Class Exploitation by Donato and Taddeo who thoroughly discuss the capitalist appropriation of new economic mechanisms resulting in a reduction of labour power and an increase in the surplus labour time and surplus value. They argue that the new era which witnesses augmented use of artificial intelligence and robotics will amplify the symptoms of the current crisis rather than put an end to it (111). Their article has considerable potential to inform ongoing theoretical discussions about the effects of mechanization on the structure of class relations and other class-oriented debates revolving around the artificial intelligence.

The articles in the section of Class and Culture investigate culture’s effects on the identification and perception processes relevant to labour by introducing empirical data from different parts of the world such as Latin America, South Africa and Australia. Thus, in a sense, the section brings a new dimension to discussions dealing with culture and class. For instance, Kabat and Sartelli assert that subjective identification based on secondary categories (i.e., gender, ethnicity, etc.) is deliberately promoted by the dominant class and its agents to hinder the development of wider class consciousness in Latin America. They recommend that socialists should firmly defend the lines of class consciousness while not giving into populist and subjective views affecting the way workers perceive themselves (146). Another article by Yılmaz points out the current political preferences of working class members worldwide that seem to be in favour of populist far right movements. Accordingly, Yılmaz argues that people’s perception of their own interests is not necessarily determined by the class position but “by whom they come to see as the main adversary” (199). He observes a political move in Europe from left to right, (i.e., from class to culture). In the recent past, people in Europe, including immigrants who moved to Europe from elsewhere, were identified by their homeland and their social class; now, they currently are identified by their assumed religions even if they have no religious belief (200-1). To support his arguments, Yılmaz shares his personal experience in Denmark in the course of which people’s perception of him changed from immigrant worker to Muslim immigrant. In general, Yılmaz successfully elaborates on economic and political reasons why people define themselves by cultural antagonisms rather than their social class. Moreover, he offers valuable insight into developing a new progressive political agenda that may successfully manage the tensions existing among class, culture and identity. In this respect, his article fosters the debate on the place and importance of culture within the terrain of class politics.

In the final section called Class and the Media, Biressi’s article is remarkable for its search of new possibilities of class representation on screen. She analyses the 2014 feature length documentary The Condition of the Working Class and derives from it hints crucial to construct a new artistic style that could overcome archetypal representations of the working class. These archetypal representations include those of industrial workers, trade unionists and belligerent political activists that have an impression of “past-ness” in themselves (238-9). Biressi also puts emphasis on the image of ‘respectable working-class’ which is especially designated for women members of the class. The image contrasts with that of ‘unrespectable poor’ and represents women as hardworking characters who are bounded up with family and local values (240). Accordingly, she argues that The Condition of the Working Class overcomes these stereotypical representations by stressing the dynamic formation of the working class and de-stabilizing political worker’s stereotypical image of mulish agitator (244-5). I find Biressi’s attempt at a new artistic style distinctively valuable. It is indeed an urgent need for working class filmmakers and film theorists alike to produce new film forms that may function as cognitive educational tools for the working class and not only depict it from a nostalgic standpoint. Both Biressi’s article and its object of inquiry, The Condition of the Working Class, are beneficial sources for researchers who aim to create such new film forms. Rest of the section concludes with a range of debates on such themes as exploitation of the working class on Reality TV and queer/class intersectionality in film.

In sum, Considering Class presents its readers with new viewpoints on class by re-evaluating class theory from a contemporary standpoint and studying its place in culture and media. The book is worthy of commendation in that it successfully reintroduces critical perspectives on class theory to culture and media studies. It therefore proves a valuable collection of scholarly texts for researchers of relevant themes.