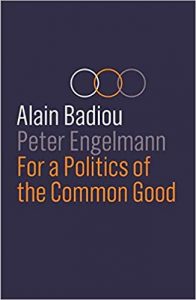 This book is a conversation-cum-interview held in 2016 between Alain Badiou – philosopher, academic and former Maoist militant – and Peter Engelmann, a publisher and philosopher who specializes in postmodernism and deconstruction. Although well known in his native France, Badiou has increasingly gained attention in the Anglophone world since the publication of The Communist Hypothesis in 2009. Here Badiou argued for a renewal and revitalization of communism and for its continuing validity. In this work Badiou and Engelmann continue the dialogue they began in Philosophy and the Idea of Communism (2014), although The Communist Hypothesis or Philosophy and the Idea of Communism are not prerequisites. The thrust of the interview is an attempt to test Badiou’s arguments against both the historical defeat of communism and the concrete problems of today, such as rising inequality, migration, terrorism and the rise of the far-right. This lively and engaging discussion is both short and accessible, and as such it could serve as introduction to Badiou’s thought and his arguments for the continuing relevance of communism.

The book begins in reference to its predecessor: Philosophy and the Idea of Communism. In the five years since its publication, Engelmann remarks, the problems of globalized capitalism have only grown and intensified. Inequality continues to increase, there is the war in Syria, ISIS and terrorism in Europe and an increase in refugees and migrants as a result of these issues. Nationalist right-wing groups have capitalized on these issues and have grown stronger. With this context, Engelmann asks Badiou what a politics of ‘the Left’ should look like in response to these challenges and whether his answer from five years ago still applies equally to today.

This question marks the beginning of the first section, ‘The Situation of the Left Today and the Necessity of an Alternative’ (3-22). Badiou’s response takes various steps. He begins by first seeking to clarify what is meant by the left (6). He identifies two dominant options. Firstly, the social-democratic response, where one accepts capitalism in exchange for political stability and certain democratic rights. The other option is communism. The second move Badiou makes is to identify the current situation the left finds itself and the causes behind it. One of the central tasks for the left today, Badiou claims, is to ‘take stock of [the twentieth century]’ (ibid) and identify why communists have failed. To identify these failures Badiou argues that we must return to Marx’s conception of communism as a four-point programme (8). Firstly, the abolition of private property; secondly, the transformation of the division of labor; thirdly, the importance of internationalism. Badiou claims that for Marx ‘internationalism wasn’t some extra ingredient; it was a basic precondition’ (9). Fourthly is the withering away of the state. Badiou goes on to argue that the communist states of the twentieth century failed to achieve the four-point programme. Only the first point – the abolition of private property – was taken as a serious aim. Regarding the other three, Badiou states that ‘practically nothing was done!’ (10).

The second section, entitled ‘The Democratic Discourse’, begins with Engelmann asking Badiou why so many people find it hard to imagine an alternative to capitalism. Badiou claims that this is because of the ‘democratic discourse’ – what Badiou also refers to as ‘modernity’ (24). This discourse is about individual freedoms in the broader sense, such as personal freedom and freedom of speech. This discourse legitimizes capitalism by suggesting that it is responsible for democracy and its supposed benefits. The examples given are living in peace, sexual freedom, freedom of morals and the status of women. To Badiou, people struggle to part ways with capitalism because they believe it is synonymous with the democratic rights they enjoy. This is because these rights – according to Badiou – have only emerged in capitalist democracies and were absent in communist states. This, however, is a poor reason to not believe in an alternative.

What we most do, Badiou claims, is point out that ‘none of the supposed freedoms that capitalism claims as its own are only conceivable within capitalism’ (28). This section is the weakest part of Badiou’s argument. To claim that capitalism itself is responsible for the freedoms of liberal democracy – ‘Of course it is responsible for them. Definitely’ (24), is misleading. Whether the Chartists in England and the right to vote or feminism and the rights of women, the freedoms of liberal democracies were more often than not the result of sustained radical struggle against the capitalist state. It is only after the fact that liberal democracies appropriate these freedoms and sanitize the history which led to them. It is only near the end of this section that Badiou adopts a more critical stance towards these freedoms, claiming that under capitalism ‘the destiny of this freedom is actually wage labour’ (38) and that, for example, freedom the press does not truly exist if all papers – including supposedly left-wing ones like Le Monde or Libération – are owned by capitalists (39).

The third and final topic of the first interview, entitled ‘Communism as Modern Politics’, touches upon the practical requirements needed if communism is to be revived. Engelmann begins by asking Badiou where does resistance to capitalism come from, and what forces will be the ‘real carriers’ of this resistance (41). Badiou begins by making an argument he sustains throughout the entire book: the importance of a global or international perspective. Since capitalism is hegemonic globally, resistance to it must as well be global. Badiou goes onto identify four potential foundational forces in the resistance to capitalism. The first is what he calls the ‘nomadic proletariat’, which is ‘the collective available workforce worldwide that’s more or less wandering around to find work somewhere’ (ibid).

The second force is found within the more precarious parts of the middle-class. The third is found in the Western youth, although Badiou does not clarify why it is the Western youth and not the youth worldwide. Parts of the youth ‘share in the worries and hardships of the nomadic proletariat’ (ibid) as such are more open to the communist hypothesis. The fourth and final part is found within the intellectuals, because ‘every movement needs intellectuals’ (45). It is important to note that Badiou is not arguing that these groups are already actualized, rather he is attempting to provide a ‘future profile of what might develop into a global political force’ (46).

The first topic of the second interview, aptly titled ‘The New Imperialism’, is an analysis of the contemporary practices of globalized capitalism as a new form of imperialism. Badiou locates the difference between old imperialism and new imperialism in that ‘capitalism no longer creates colonies but rather destabilizes states’ (57). Engelmann begins by asking why it is in the interests of capitalism today to destabilize states rather than colonize countries. Badiou claims that currently there exists a tripartite division among former colonial subjects: they are either ‘weak, corrupt states’ that obediently serve the colonial powers (60), or stronger states that show greater resistance to imperial pressure. The third category is not a form of state but rather its absence, what Badiou calls ‘zones’ and defines as ‘largely or entirely devoid of state structures’ which are ‘essentially open to those with the most capital, the most mercenaries and the greatest capacities for intervention’ (ibid). Thus, if an imperialist power cannot control a former colonial subject through bribery or soft coercion, it opts to destroy it. Examples of this can be found in Congo, Rwanda, Libya and Syria.

In the penultimate section, ‘Politics of Identity’, Badiou rejects Engelmann’s arguments for a culture clash thesis. Engelmann begins by claiming that ‘Islam happens to be a very traditional religion’ and suggests we should ‘worry’ about the problems ‘the confrontation of different values’ may cause (71). Refreshingly, Badiou rejects the question entirely, claiming that Engelmann’s fear is ‘an invention of the West, a phantasm’ (ibid.). These suggestions are at best hypocritical and at worst a way in which fascist discourse is enabled. Badiou argues that once one begins to entertain the notion that there’s a clash between cultures between the West and Islam ‘one’s playing the fascists’ game’ (76).

In the final section, ‘The Principle of the Common Good, or: Beyond the Economy’, instead of a politics of identity, Badiou argues for a politics of universality based on the common good. It is necessary for communist politics to define itself as a politics for the whole of humanity, not just a particular aspect of it. Badiou claims that this is a return to Marx, as he believe communist politics would allow ‘humanity as a whole’ to ‘realize itself’, and that only a communist politics is truly capable of being ‘a politics of the common good’ (87). Engelmann is suspicious that this could be possible, as it would require ‘global solidarity between different groups’ (88). Although daunting, Badiou argues that a basic transition would have to occur. The purpose of politics would be ‘in the service of the common good’ (89) – the good of all humans. In response to doubts that this could be possible, that there could be ‘an equal distribution of communal goods among all people’ (92), Badiou points out that there already is a global distribution – why should it be impossible to change this distribution along egalitarian lines?

If Badiou’s aim in undertaking these discussions with Engelmann was to demonstrate the ‘validity and applicability’ of his ideas, then he has succeeded. The particular strength of the book can be found in the way in which Badiou considers the particularities of today. Philosophers – particularly those of an analytic bent in the west – often operate on a rigid delineation between theory and practice. Theories originate in the abstract and only after they are formed are ‘applicable’ to the world. The result is that often works of philosophy that purport to deal with ‘contemporary problems’ feel forced and irrelevant. This distinction and practice, however, is anathema to Marxism. Badiou demonstrates how it is only in and through concrete reality that a tenable philosophy can be developed, especially if it is one which can offer solutions to the most pressing of political and social problems.