Marx & Philosophy Review of BooksReviews‘The Government of Time: Theories of Plural Temporality In The Marxist Tradition’ by Vittorio Morfino and Peter Thomas reviewed by Garrett Pierman 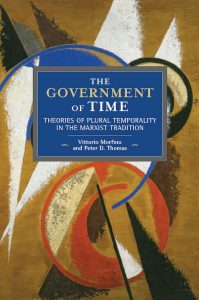 Vittorio Morfino and Peter Thomas
The Government of Time: Theories of Plural Temporality In The Marxist Tradition

The Government of Time promises to be a vitally interesting intervention in the study of Marxist theory in the twenty-first century. At the intersection of increasing income inequality, the growth in power of a globalist bourgeois class, and the movement of labor into new digital environments, deepening and complicating Marxist understandings of time is important.

Temporality, much like race and gender, seems to have been of secondary importance to Marx himself, and some argue has even been left behind somewhat in the tradition to date, especially when considering the Frankfurt school. A study of time, then, is fertile ground for research in the historical materialist tradition. It is in deepening such understandings, through careful readings of Marxist theory, that The Government of Time places itself. At least, that is what I was led to believe by the title, back cover blurb, and introduction written by the editors of the volume. The book as it actually exists, though, is much less clear in any sustained research agenda that, in many ways, shows some of the major obstacles in producing an edited volume.

Before getting to the critique, let us begin with some of the positive aspects of the work. First and foremost, centring time and temporality in discussions of Marxism is vitally important in the understanding of economics under late capitalism, and thus the overall project of the book seems to be a thoughtful idea. In the work itself, a few of the chapters stand out as substantial contributions to knowledge. Augusto Illuminati’s chapter on Rousseau’s general will, for example, provides a fresh reading of the Genevan scholar that demarcates the differences between the general will and public opinion more clearly than I have seen thus far. Similarly, the two chapters on Gramsci attempt to bring notions of temporality to bear on the idea of hegemony, is a worthy venture. The chapters on Marx himself, of which there are three, provide occasionally interesting readings of classical Marxist theory that might complicate existing ideas of time and its interaction with exploited labor.

In recent years, scholars writing in the tradition of historical materialism have been engaging with time in ways that are oriented at greater understanding of the economics of late capital. Foucault famously does so in Discipline and Punish and, more recently, Crary tackles temporality under late capital in 24/7. Those works, and a plethora of others, add fruitfully to discussions aimed at developing sensible and sustained critique of the economic conditions under which we find ourselves. In re-reading the classical Marxist tradition, The Government of Time, at least ideally, promises to enter into that discussion and breathe new life into a previously somewhat dusty element of early historical materialist scholarship; ideally, anyway.

The book as it is does not really live up to the hopes it sets out to fulfil. The introductory chapter, supplies the reader with very few tools with which to engage the rest of the work, and instead offers a light summary of some of the chapters, which themselves engage with such far flung literature that I cannot help but wonder why all of them are in the same book.

As mentioned above, three of the chapters deal with Marx directly. The rest seem to only casually engage with Marx, or historical materialism at all. For instance, one chapter is devoted to a reading of some of the works of Pasolini, which quickly devolves into obscure discussions better fit for literary theory than for political theory. The book is plagued by these tangential connections to Marxism. For example, the chapter which concerns itself with Rousseau presents an interesting reading of Rousseau while the sections on Marxism often seem tacked on as an afterthought, and as such they distract from what would otherwise be an interesting journal article. The chapters more directly tied to French and Russian history are more on the mark. It is in these chapters that the larger frustrations with the work temporarily abate, but they quickly return when engaging with the chapters that are esoteric, it seems, for the sake of being esoteric. For example, chapter seven, covering Gramsci’s notions of time, is written with such jargon-laden run on sentences that it is often difficult to sort out what the author meant to convey in the first place. The chapters that are the most theoretical, those concerning Bloch, Althusser, and Gramsci, are often such sweeping surveys of theory that even veteran Marxist thinkers, familiar with some of the most difficult to comprehend poststructuralist thought, are left merely befuddled rather than enlightened by what they have read. This is, in my view, due to a few critical flaws in the authoring of the book itself.

The primary flaw is that, as best I can discern, there is no one single research question, nor even a general field, that is present throughout the book. It seems as though any chapter that used the words ‘Marx’ and ‘time’ were fair game for inclusion. Subjects covered in the chapters, in order, are: Rousseau’s General Will, Sieyes’ role in the French Revolution, two chapters on Marx himself, two summarising the thought of Bloch, another two on Gramsci, and a consideration of the works of Pasolini. This skipping around from subject to subject, with the changes in authors, leaves the reader without a clear development of an answer to any one particular question, and instead presents us with only tangentially connected chapters.

There are, it is important to recall, some bright spots in the work. The Rousseau chapter in particular, provides an interesting and novel reading of thinking on the General will in such a way that it is in greater conversation to the 21st century. Basically, Illuminati develops that the General Will is more tied to the long-term wellbeing of a people, whereas public opinion can change more immediately. Looking at the difference between the two in terms of temporal scales is a clever and clear distinction. Additionally, the bibliography is rich for those looking to get further into Marxist scholarship. There are citations to much of the scholarship that could potentially inform interesting, clear work that interrogates the temporal elements of economics, from classical Marx to Benjamin and more.

If this book were to be a success, I would make some humble recommendations for a much-updated edition. First, the work needs, badly, a unified research agenda or a set of questions around which the chapters would be structured. This would rectify the major issue of the book, that most of the chapters seem only tangentially related to Marx or temporality. Second, I would suggest that the editors make use of their ability to turn down chapters. The work would have been an interesting conference panel, perhaps a special edition of a journal. Presented as a standalone book, though, the lack of unifying theme, and inclusion of such disconnected chapters, makes the reading of The Government of Time a beguiling experience. Overall, the work could be passed over in the study of Marxism with no serious loss to the reader.

That time is vital to an understanding of economics is clear. From Marx’s own formulae, to even Locke, the time of the labourer has long had a central place in economic analyses. In more recent decades, and often more clearly done than in the work herein reviewed, time has once again come to the fore. For instance, Foucault in Discipline and Punish makes the case for the modulation and control of time as a central component to disciplinary economy of power. Additionally, Crary updates Leninist understandings of the expansion of capitalism in his phenomenal book 24/7, which is well worth a read for a clear understanding the role of time in the continued and deepening exploitation of the working class under digital capitalism. There are well done, clear, and contemporary looks at temporality from historical materialist perspectives, I am simply unconvinced that The Government of Time is one of them.

Overall, the premise of The Government of Time is one that deserves careful attention. The development of the web and hastening of economics under late capitalism, as well as the development of precarious gig economies, makes it clear that temporality is a key component of political and economic conditions in the contemporary moment. This work, on the other hand, is mostly an obtuse reading of various theorists with very limited success. The book as a whole is difficult to even summarise, as the chapters seem to be only connected to the topic presented on the cover in the most surface of fashions. This work reads more as a collection of papers that might turn up in a library search for ‘Marx Time’ rather than a carefully edited volume interrogating a researchable question. Hence this book, perhaps, would be best passed over for clearer works that concern themselves more directly with the question begged by the blurb on the back cover. There is a lot of promise in the field of researching Marxist Temporalities, but The Government of Time is in many ways a wandering, speculative work of questionable merit in terms of actually adding to understanding of a particular part of Marxist scholarship.