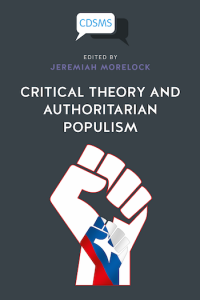 J.D. Evans teaches at George Mason University. He is working on an interpretation of Adorno based …

This volume brings the early generation of the Institute for Social Research, or ‘Frankfurt School’, to bear on today’s authoritarian populism. Morelock provides an excellent introduction on the history of the Institute’s studies on authoritarianism as a bridge to the other contributors. The first section applies early critical theory to contemporary authoritarian populism, while the second section’s essays offer their own theories inspired by the Frankfurt School. The essays in the final section look at the use of social media by contemporary authoritarians.

In the first section, John Abromeit argues that the Institute’s studies of authoritarianism can explain our failure to predict populism’s success: social scientists who studied right-wing authoritarianism were historically naïve, while more historically minded critical theorists focused on developing normative foundations, rather than on ‘real, existing catastrophic tendencies’ (22). By contrast, early critical theory investigated the links between capitalism and authoritarianism, an approach which would have helped us predict the growth of the latter.

Douglas Kellner offers a Frommian analysis of Donald Trump and similarly, Lars Rensmann uses the psychological typologies of the early 1950s, but with an eye as well to the social ‘origins of civilizational discontent and authoritarian rebellions in the age of global capitalism’. He uses this contextualized typology to show how authoritarian leaders mobilize support within democracies. In short, they practice ‘psychoanalysis in reverse.’ They irritate and channel our ‘unconscious fears and desires rather than making them conscious’ (41-2), feeding on and feeding our delusion and resentment.

Samir Gandesha compares early Frankfurt School work on populism to the claims that 1.) populism is bad and rooted in cultural backlash, and 2.) that populism is good because it is the essence of democracy. A preferable account would ‘integrate both explanations of economic and cultural insecurity via social psychological explanations’ (60). The culturalist theory of populism tends to whiggish fatalism: if the problem is purely cultural, then the passing of time will see the victory of younger, more progressive culture. The ultra-democratic theory of populism is caught in the dilemma that ‘the people’ often want the wrong thing. Critical theory avoided these problems. It enables us to ‘build an account of populism that an integrate both explanations of economic and cultural insecurity via social psychological explanations’ (60). Fromm is able to do so insofar as he stresses the importance of what Berlin would later call ‘positive freedom’. When people lack positive freedom – when they have ‘liberty without democratic institutions for self-determination’ (62) – they grow anxious, and may try to allay that anxiety ‘by subordinating themselves to an all-powerful, authoritarian figure’ (62). This, Gandesha argues, is what we are seeing in the wake of neo-liberal globalization.

In the second section, Stephen Eric Bronner’s ‘From Modernity to Bigotry’ is taken from his book, The Bigot (2014). It stands out here for its dense, suggestive prose whose central claim, influenced by Adorno’s work, is that bigotry persists both despite and because of the triumph of enlightenment. Bronner offers us a typology of the bigot. For instance, the bigot ‘looks for what is rock solid, what is seemingly beyond circumstance, and he needs his trinity: religion, convention, community’ (89). At the same time, he rejects the actual content of religion – ‘mitigating suffering’ (90). Such inconsistencies do not trouble the bigot, because he does not care about argument or consistency. The bigot is not a liar, though. ‘Lies are subject to falsification, but the bigot’s existential self-definition is not’ (94). Bigotry is identity politics of the worst possible type, in which the identity is taken as nothing more than ‘an experiential given and a natural fixed attribute’ (102).

Charles Reitz offers a programmatic plea for a new world system, combining Marcuse’s thinking on repressive tolerance, the rehumanization of the labour process and the decommodification of necessary social services and environmentalism, while also bringing in Lukács and Aldo Leopold – and tracing the use of ‘racism and sexism as economic and political weapons’ (109). Against this, he advocates for a ‘humanist commonwealth: an egalitarian, affluent, green political-economy’ (127). This is, of course, an expansive project for such a short space, but the essay nevertheless stands out for its constructive approach.

Jeremiah Morelock and Felipe Ziotti Narita’s chapter refreshingly pays attention to populism and authoritarianism outside the West. Their essay also reaches beyond the early Frankfurt School to Habermas’s mature social theory. They try to salvage something of this later, anti-Marxist work by combining it with Wallerstein’s world-systems theory. In Habermas’s terms, we can see that authoritarian populism has two preconditions: the separation of system and lifeworld, and failures of the public sphere (either through exclusion of specific groups, or the state acting without attention to the public). Using Wallerstein, we can see that authoritarian populism is particularly likely to arise when regions shift between the periphery and semi-periphery of the world-system. The authors deftly show this happening in Latin America.

The final section is devoted to work on social media. Christian Fuchs analyses comments from the Facebook pages of right-wing Austrian politicians, and constructs typologies for right-wing extremists. Their discourse features five primary topics, which together make up an ideology: charismatic leadership, nationalism, the friend/enemy schema, new racism and violence. Panayota Gounari also uses critical discourse theory, but applies it to Trump’s Twitter feed. Gounari offers multiple analyses of the five features of US authoritarianism, the five features of Twitter as a producer of ‘one-dimensional discourse’ (213) and the five ways that Trump’s Twitter feed exhibits features of US authoritarianism. Both Fuchs and Gounari’s typologies match up with other descriptions and analyses of right-wing extremism.

Finally, Forrest Muelrath discusses Adorno’s analogy of Wagner’s operas and the nineteenth century phantasmagoria. Adorno charged Wagner with hiding the production of his work by the ‘outward appearance of the product’ (233), as in a magic lantern show, or the fetishized commodity. In each, the observer’s subjectivity is reflected back to them. Muelrath suggests that Trumpian social media functions in the same way. His followers project their own subjectivity onto him. But even those of us who wish to enlighten Trump’s followers are caught up in the phantasmagoria. We must continue to watch and observe, and in doing so, we too feed the machine. Trump must be understood in these terms, because ‘the threat that an authoritarian could capitalize on shared psychosis triggered by communications environments such as the present one and severely alter perceptions of reality en masse is all too apparent’ (245).

The volume also raises a number of more difficult questions about using early critical theory today. The way these theorists combined psychological and sociological thinking is hardly unquestionable, and it is not clear that the psychological and sociological explanations for authoritarianism are equally useful. Adorno et. al.’s The Authoritarian Personality and Fromm’s work were influential because they offered clear psychological typologies of the authoritarian. This encourages us, in turn, to offer more definitions and typologies. These typologies however can create as many problems than they solve.

The Authoritarian Personality’s typologies were politically biased, and those biases then showed up as confirmation bias (Gordon 2018: 53). When we know that we are looking for authoritarian traits, we will find them among those we have already judged to be authoritarian. So, for instance, The Authoritarian Personality picked out ‘rigid adherence to conventional, middle-class values’ as an attitude indicating latent fascism (228). Even at the time this was questionable. Nazis, presumably, were and are authoritarians, but their adherence to conventional middle-class values was hardly a given. And today, populists like Italy’s Lega Nord, Bolsonaro or Trump thrive by rejecting bourgeois values such as rationalism, work ethic or sexual propriety. The trait of ‘rigid adherence,’ like the others, was pre-selected to fit a given set of right-wing individuals at a specific time. It is not predictive of anything other than membership in that set.

These essays also raise the question of whether typologies and definitions help us to explain authoritarian populism, or restrict us to describing it. Kellner’s essay does show how easily Trump can be slotted into Fromm’s categories, for instance. He quite accurately describes Trump as the president appears on our screens. But that does little to explain Trump’s success. In order to explain authoritarian populism, we would need a theory of greater social depth – something more like Adorno on social domination or Horkheimer on rackets, as Rensmann’s useful essay suggests (38-39). Such theories are explanatory, in that they show the conditions for the psychological tendencies and traits, rather than making those tendencies the invariant conditions of voting patterns.

This point was made by Adorno himself, in his ‘Remarks on The Authoritarian Personality’ (Adorno et al.: xli-lxvi). These recently published notes show Adorno’s ambivalence about the conception and execution of The Authoritarian Personality project. Rather than attributing anti-Semitism to personality types, he sees it as ‘essentially social rather than psychological,’ and that it ‘has to be understood economically, to the degree to which society itself is constituted through economy’ (ibid). If there are types, they are not psychological types, but historically constructed, social types. The typical person has been integrated into ‘standardized forms of life,’ (ibid: lxv). So, as Peter Gordon puts it in his discussion of Adorno’s notes, it is no longer clear that we can ‘identify something like a “personality” at all’ (Gordon 2018: 55). Psychology, which assumes a specific type of active personality, is not the right way to study such a form of life. To explain authoritarianism, we need to start with social theory. But in that case, we should be more selective in our use of early Frankfurt School theory. It was too often uncritical in its attempt to combine the psychological and the social, and far too often prioritised the former.