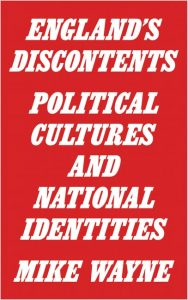 Writers hoping to make sense of the past two decades of British history face a host of challenges.  But those aiming to unravel the many twists and contradictions of the past two centuries of that history confront infinitely more knotty constellations of problems. That, however, is what Mike Wayne, professor of film and media studies at Brunel University, sets out to do with this book. As he puts it early on, his aim is to provide readers with an account focused “on the internally contradictory dynamics of the key political cultures that have fashioned Britishness” (5).  To help guide readers through the two hundred years of these developments, the book’s opening chapter unpacks, explains and demonstrates a finely calibrated theoretical compass and conceptually plotted chart drawn from Antonio Gramsci’s journalistic and prison writings. Following discussions of central issues in this literature involving contrasts between state and civil society as well as between hegemony and common sense, Wayne shifts attention to the notion of the historical bloc.  Whilst this concept’s meaning has been subject to much debate among Gramsci scholars, there exists some degree of consensus about its role as a way of temporally capturing, expanding and articulating Marx‘s vision of the dialectical relations between society’s material base and its ideological superstructure.  In Wayne’s reading of Gramsci, the historical bloc takes form as ‘the configuration of social-economic interests that are brought together into a set of class alliances within a given political-moral framework that sets the agenda and terms of debate, the moral and intellectual leadership (hegemony) of a country’ (37).  For Wayne, this concept is not so much something to be defined and discussed, but rather it is to serve as a practical framework for showing readers how political cultures and national identities in Britain have restructured their relationships in responding to socio-economic contradictions, opportunities and constraints.

Rather than rehashing traditional ways of describing national identities with lists of attributes such as the “decency” of the English celebrated by Orwell or with representations by mainstream entertainment media making the actions and values of the propertied classes and aristocracies synonymous with Britishness, Wayne argues that a Gramscian perspective opens our eyes to the processes whereby national identities evolve in relationships with political cultures.  This framework he contends allows us to see that British history since the 1800s has witnessed the development of five distinct cultures of conservatism, economic liberalism, social liberalism, social democracy and socialism.  Conservatism, Wayne claims, is not only the oldest, but more significantly, the most successful political culture.  With its respect for private property, possessive individualism, nationalism, and traditional hierarchies of class and culture, conservatism has served for centuries as the long blue thread joining but often coexisting uneasily with variants of economic liberalism privileging the competitiveness and destructive dynamism of the capitalist economy. Wayne’s detailed description of the divide between the political cultures of economic and social liberalism is strongly reminiscent of Marx´s famous treatment of the conflict about the Factory Acts splitting British capitalists into those prepared in the name of ever greater profits to work their factory hands to death while the other side favoured legislation aimed at insuring reproduction of future workforces.

Wayne devotes much of the book to showing how these five political cultures clashed and coalesced through time while responding to contradictions generated by conflicts within and between classes.   These struggles, he points out, have been continually exacerbated by commodification, atomization and other processes central to the functioning of the economic system famously destructive of all that is solid. Emphasizing especially the staying power of conservatism as well as economic and social liberalism throughout history, Wayne argues that these often produced rearrangements of class relationships expressed in the form of ‘terms of settlement’ (142) leading to the formation of three distinct historical blocs.   The first of these, dominant throughout the 19th and early decades of the 20th century, drew from conservatism as well as economic and social liberalism.  This period was one marked by consensus about key economic and social issues.  As the century ended, erosion of the holding power of this bloc began to accelerate due in great part to the emergence and growth of an organized working class.  This development tied in with a deepening of the cleavage between social and economic liberalism.  Wayne claims that economic liberalism ‘largely vanished from the ‘common sense’ of mainstream political thinking’ (38) owing in great part to the Great Depression followed by the rise and fall of the Axis powers. The electoral victory of the Labour Party in 1945 leading to the creation of the Welfare State marked what Wayne describes as the emergence of the Social Democratic historical bloc. This bloc, he contends, owed much to compromises brokered by fractions of organized labour and reform-minded liberals.  But this unsettled partnership proved to be short-lived and began to implode in the late 1970s.  Wayne attributes the unravelling of this relationship to an organic crisis generated by irreconcilable contradictions deeply embedded in the capital-labour nexus. The failure by Labour governments to deal with these and related structural calamities triggered in part by the first post-war recession set the stage for the launching of the historical bloc of economic liberalism by the Thatcher regime. Since then, this bloc’s history has been punctuated by a series of clashes between defenders of backwards-looking conservatism and champions of economic and social liberalism. As Wayne sees it, the many contradictions and fissures generated by these struggles coupled with the abandonment of the working class by New Labour produced in recent years a major crisis for the entire historical bloc.  This upheaval, he argues, led to the referendum on Scottish independence in 2014 followed shortly thereafter by the referendum on Britain’s EU membership.  After analysing these votes, Wayne introduces a critical but respectful discussion of Stuart Hall’s use of Gramscian concepts in his assessment of developments in British political, social and cultural life before and after Thatcher’s election.  In concluding the book, Wayne provides readers with a chart outlining the way ahead for those struggling to ‘forge a new historic bloc around social democracy’ (240).  This, he declares, is most crucial at a time when the alliance of conservatism with economic liberalism underpinning today’s historical bloc ‘is vulnerable and open to challenge in a way that has not been the case for around forty years’ (214).

In assessing the value of a book aimed at unravelling two hundred years of British history, one needs to ask whether its author has produced an account making sense of economic, political and social developments during this period? The answer to this question for this reviewer is a definite yes.  Perhaps its greatest strength lies in the multifaceted framework Wayne wields so adroitly in showing how the historical bloc serves as a way of comprehending what has happened in Britain since the beginning of the 19th century. In making the case for using this and related Gramscian concepts as tools for untangling and understanding economic, political and social developments of that period, he assembles evidence from a diversity of sources drawn from film, television and cultural studies, communication research, political economy, and historical documents. Wayne shows, for example, how Downton Abbey and The King’s Speech reinforce values central to the political culture of conservatism by celebrating the capacities for adapting to rapidly changing times possessed by aristocratic elites and the propertied classes.  Similarly, he points out how The Apprentice, Dragon´s Den and a range of televised song and dance contests with their shared focus on individualism, competition and other facets of self-entrepreneurship strengthen the hegemony of economic liberalism in contemporary British life.  At a more macro-theoretical level, Wayne skilfully draws from the analyses and critiques produced by an assembly of intellectuals in showing how struggles within and between classes have created, shaped and reshaped political cultures in Britain.  In discussing arguments raised by Perry Anderson, John Grierson, Karl Marx, John Hobson, Tom Nairn, Raymond Williams and others, he shows that their writings though using different vocabularies and different perspectives add to our understanding of the diverse ways these cultures impact on how individuals, classes and societies think about themselves and their sense of who they are.

Perhaps the greatest benefit readers can glean from this book lies in the explanatory framework it provides for December’s electoral victory of a Conservative party. Rather than attributing Johnson’s triumph to clownish charisma or scapegoating Jeremy Corbyn and his supporters, readers are better served by attending to the main thrust of the arguments advanced by Wayne.  In using the concepts of political cultures and historical blocs as tools for making sense of two centuries of economic, social and cultural developments in Britain, he shows that the ascendency in 1945 of social democracy lasted less than three decades.  In the grand scheme of things, its short history represented a minor back eddy on the edge of a mainstream long dominated by conservatism allied in different constellations with both forms of liberalism.  Though Wayne makes no effort to disguise his sympathy with the left, his book nonetheless provides readers with a coolheaded assessment of the relative weakness of social-democratic political culture in British history.  Conservatism, he argues, has always exercised great ideological power by symbolically celebrating possessive individualism, social hierarchies, nationalism and other key aspects of Britishness.  Conservative triumphs in traditional Labour enclaves torn asunder by decades of neoliberal capitalism provide evidence in support of Wayne’s argument about the strength of the nationalist project at the heart of the political culture of conservatism.

Readers interested in the history of British imperialism will find little of substance in this book.  The absence of discussions relating political cultures and national identities to the rise and fall of the British Empire represents the most obvious weakness of Wayne’s historical investigation. His examination of social democracy, for example, could have profited greatly by addressing the many contradictions existing in the support given through time by Labour politicians and governments to a host of bloody imperialist adventures.

For this reviewer, the book’s greatest strength lay in its use value as a framework helpful in making sense of the history of my own society.  In demonstrating the analytic toolkit making up what he calls ‘applied Gramscianism’ (6), Wayne provides a guide for untangling and for making sense of the many contradictions operative in referendums in 1972 and 1994 where 52 per cent of the electorate in Norway twice voted to reject EU membership.  Rather than accepting conventional formulas relating these votes to conflicts between provincialism and urbanism, the multidimensional perspective developed by Wayne was of great help in contextualizing these votes and seeing them in relation to struggles between classes, class fractions and Norwegian political cultures about issues of national belonging and identity.  And those applications by no means exhaust the wealth of frameworks available for use in a volume testifying throughout to the all-embracing analytic imagination of its author.