Marx & Philosophy Review of BooksReviews‘Capital Is Dead: Is This Something Worse?’ by McKenzie Wark reviewed by Garrett Pierman 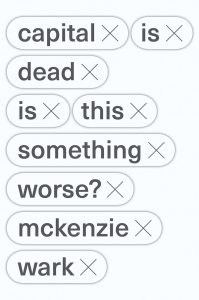 McKenzie Wark
Capital Is Dead: Is This Something Worse?

Wark, in writing Capital Is Dead, makes a timely intervention in contemporary political theory on the left. Since Foucault, it has been the project of us in the critical tradition to attempt to more accurately map present and emergent economies of power. Adding to the sheer complexity of that task, globalized information capitalism has made it increasingly hard to find much, if any, solid footing from which to speak truth to power. The past few decades have, for socialists, been a puzzling time. The tools of the web, at least on their surface, would seem to be, and sometimes are, used to build solidarity and work against the inhumane machinations of capitalism. Another, perhaps more hegemonic trend, has also emerged that requires our attention: the use of these new technological tools to the ends of capitalism. With new spaces of labor in the digital realm have come new forms of exploitation and class struggle. These new economic changes, much like the shift to neoliberalism in the postwar era, demand the attention of scholars on the left.

In searching for a foundation from which to build an analysis of our current situation Wark turns productively throughout Capital Is Dead to the classical Marxist tradition as an analytical starting point, adding in this work some sharp commentary to attempt to develop a historical materialism that has been updated well into the information age. This short review begins with a brief summary of the book. Following that summary, I offer a few critiques and ultimately attempt to situate this timely work within the current intellectual climate.

Wark’s introduction, clear and well considered like the vast majority of the book, outlines the general problem. It has become clear, she notes, that the asymmetries in ownership, labor and power that were symptomatic of industrial capitalism have, indeed, carried over into the digital age. What we have seen, chapter one details, is a shift in the mode of production to a focus on the production and ownership of information and its requisite digital labor. With that new mode of production, the second chapter finds, there is a new class of capitalists, who own information instead of factories. This does not mean, necessarily, that we must abandon historical materialism: we must, however, update it to make sense in a world of information capitalism than instead of a simply industrial analysis.

In the contemporary moment, the chapters at the heart of the work argue, the web and its connected industries have become the new sites for class antagonism. To account for this shift in economics and class struggles, what is needed, and in fact called for in the closing chapters, is an updated Marxism that fits digital economics.

Before getting to the strengths of the work, of which there are many, I would like to offer two minor critiques. First, chapter six, which concerns nature, gets esoteric in terms of both the themes and the writing. This is not necessarily a book about the ecological impacts of digital capitalism, so including the environment as a chapter, while appropriate to this field of study, is difficult to do well in a single chapter and, thus, its inclusion here is not as sharp and well put together as the rest of the book. This is somewhat puzzling. The work does a fantastic job focusing on the shift in the ownership of this new means of production into the hands of the capitalist class. That is, however, only half of the story for Marxists. What we also need, in addition to the economic analysis, is a careful consideration of class consciousness. Wark does make note from time to time that class antagonism is centering itself around the digital economy, but, for example, does little to address the development of class consciousness through new means. For instance, the development of supposedly egalitarian apps intended to let the working class invest their spare change in stocks, allowing them to participate in some token fashion in the ownership of the means of production, would have been an excellent example to include in the book.

There is also a somewhat larger philosophical puzzle that is not addressed at length in Capital is Dead. The general narrative, that we have moved in many ways to a new form of capitalism that focuses on information rather than the production of industrially manufactured goods, is obviously correct. What is less clear is how that shift may fundamentally alter dialectics. Information as a commodity has elements of both base and superstructure. There are the material elements that make and store the information, as well as the ideal elements that are the content of that information. Wrapping one’s head around that base dialectic is a tricky feature of the materialism that would be required to understand digital capitalism in a more complete way. Given that much of our information is created, and digital labor done in spaces that market themselves as either social or entertainment spaces, rather than literal digital sweatshops, what becomes clearly necessary is the inclusion of an understanding of how economics works in social spaces. Thus, it’s somewhat puzzling that there was not a lengthier discussion of the culture industry in the book – Horkheimer and Adorno would likely have much to say in the twenty-first century. Additionally, in developing understandings of the web in particular, a few recent philosophers of technology, namely Cass Sunstein and Jonathan Crary would have added depth to some of the chapters in Wark’s book.

Generally speaking however, the book as a whole is a thoughtful explanation of digital economics and a call for a new historical materialism that takes the lessons of classical Marxism, but translates them to our current historical context. To this end, it lays a much of the groundwork for the intellectual labor that will be necessary in the next several years of Marxist scholarship – the work is a clear-headed analysis of current relations of production with the degradation into inane postmodern jargon that often holds back postmodern readings of the Marxist tradition. The work takes some of the better lessons from classical Marxism, and updates them for a contemporary context. The basics of the dialectic, if both Marx and Wark are correct, should still fundamentally work. What we’re seeing in front of us is likely not a totally new phenomenon. Instead, Wark argues, this is merely the economic thesis that we could have well expected if only we had paid closer attention to the promises of neoliberal capitalism. Instead of meeting the innovations of the web with increased solidarity and sharing, what has happened instead is a privatization of information.

Privatization turns our data into a commodity and many of us into either witting or unwitting digital laborers. If we begin to see ourselves as such, then we can turn, using the conclusions drawn in Wark’s work, to a new form of class struggle and instead of focusing all of our efforts on state regulation of the web as though it were a utility, focusing now on the class struggle between the us and the owners of the digital means of production, which extend through and beyond the apparatus of the state.

Capital Is Dead is in many ways a contemporary retelling of Marx’s own analyses through fresh historical lenses with the development that we have moved past industrial capitalism, at least in part, and onto something else. The book in particular focuses on the ownership of the means of production which opens classical Marxism to fruitful re-readings. Again given that digital economics seem to focus so much on social spaces and the labor done therein, it is just a little bit puzzling that the innovations of the Frankfurt School are not featured in the book at length. This however is a more or less minor critique given that much of the growing literature on digital economics does in fact focus on the Frankfurt School. Here there might be some concern that Capital Is Dead may fall somewhat in that direction of less than careful treatments of classical Marxism that focus on class to the extent that they role other vectors, along which consciousness is formed, such as race and gender. I doubt very much that Wark intends this to be the case, but critics of Marxism do seem to love picking that particular low-hanging fruit. Instead, it might make some sense, if for no other reason than to fend off such critiques, to make sure that in writing Marxist thought that concerns the web, we also include compelling historical materialist narratives of race, gender and other facets of identity in the digital age. While, yes, all of these things do eventually intersect with class, their importance in the lived experiences of members of classes warrant thoughtful treatment on their own as well.

In terms of making use of the work, the writing is clear and its explanation of literature as well as the history of Marxism, make it well for an advanced undergraduate course. To this end it would perhaps be best suited to political theory or classes in international political economics as in addition to the long-standing body of Marxist literature that concerns itself with shifts in the relations of production. Graduate students and scholars will find the analyses presented in Capital Is Dead to be both thoughtful and compelling. Overall, we can place this book among the best in the last half-decade or so in terms of its clarity in these concerning times. While the book is not perfect, as the commentary here regarding some potential blind spots hopes to have highlighted, Capital is Dead is nonetheless a worthwhile work in contemporary Marxist scholarship that forwards historical material analyses of contemporary economics.