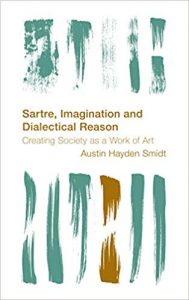 Despite his extensive work on Marxism, Jean-Paul Sartre is often described primarily as an existentialist philosopher concerned with freedom. While there is a growing body of work about Sartre’s later work, including his Critique of Dialectical Reason, it has largely been relegated to the margins of philosophy, especially in Marxist circles. Specifically, given the length and density of the book, the amount of work required to undertake an assessment of Sartre’s existential Marxism has likely deterred many scholars from engaging substantially with his thought. For this fact alone, we should be grateful to Smidt for providing a detailed commentary, critique, and theoretical contextualization of the first volume of Critique of Dialectical Reason. Volume two is omitted from Smidt’s analysis for good reasons. It was published posthumously as a loose collection of his thoughts – Sartre had ‘abandoned the project’ – and it seems as if Sartre thought his initial attempts to make concrete the ideas in volume one were too eurocentric. To this end, Smidt endorses the possibility that Sartre saw works such as Fanon’s Wretched of the Earth, for which Sartre wrote a preface, as de facto non-parochial elaborations of the framework he developed in volume 1 (8).

Although mainly focusing on Critique of Dialectical Reason, Smidt’s Sartre, Imagination, and Dialectical Reason also draws on Sartre’s existentialist period, making the case that even as a Marxist Sartre ought to be considered a philosopher of freedom. While Critique of Dialectical Reason is historically situated within the French debates from the 1930s to 1960s about the competing role of economics and agency in Marxism (Poster 1975), Smidt aptly demonstrates how Sartre’s approach to locating freedom within Marxist historicism has perennial relevance, especially in the current neoliberal context. More specifically, by examining and elaborating the role of praxis in Sartre’s thought, Smidt frames Critique of Dialectical Reason as providing a thoroughly Marxist foundation for an ‘imaginative logic of action’ (8). In the process of making his case, Smidt uncovers how the book relies on Sartre’s early work on the role of imagination, a link that has as of yet been largely unexplored. This alone, the case for a more unified interpretation of Sartre’s body of thought, makes Smidt’s work a valuable contribution to both Sartre scholarship and Marxist philosophy.

The book is divided into two parts, the first of which contextualizes Critique of Dialectical Reason within former and contemporary debates and provides detailed and helpful exegetical analysis. In part two, Smidt synthesizes Sartre’s writings on the imagination with the exegesis undertaken in the first part while also providing insightful examples of how Critique of Dialectical Reason can elucidate revolutionary praxis within the current conditions of capitalism. Chapter one sets the stage by situating Sartre’s work within Marxist theory through his critique of Lukács, as well as orienting Smidt’s interpretation by addressing Lévi-Strauss’ criticism of Critique of Dialectical Reason. Although, as Smidt notes, Sartre focuses his attack on Lukács writings from the 1930s and 1940s, omitting a discussion of History and Class Consciousness which is in fact comparatively similar to Sartre’s own position, the later Lukács provides a productive foil for contextualizing Critique of Dialectical Reason as a book generated in part by Sartre’s critical stance toward existing socialism in the USSR, specifically its invasion of Budapest in 1956 (21, 23).

Chapter two examines how Critique of Dialectical Reason has been largely been interpreted as putting forward a pessimistic ‘ontological’ and/or ‘normative’ theory of history and/or collective action (51-52). Loosely, such readings see Sartre’s emphasis on the role of material scarcity in stifling liberatory social projects and imposing a ‘serial collective’ that creates relations of ‘competition’ and ‘alterity’ among groups as negating the possibility of long-lasting revolutionary projects (55). Even if a revolution occurs, it is thought, a serial logic will impose itself on the practices of the revolutionary group, exemplified, for Sartre, in the USSR (Sartre 1963/68: 22-25). Echoing Ronald Aronson’s observation in Jean-Paul Sartre: Philosophy in the World that Critique of Dialectical Reason’s title refers to “‘critique” in the Kantian sense of determining the nature, conditions, and limits of [dialectical reason]’ (243), Smidt takes the work to be a ‘formal logical investigation into the grounds by which we might be able to develop new humanism’ that allows for the possibility that the seemingly pre-destined tendency of social relations to fall into serial logic may be overcome (68). Elsewhere Smidt also categorizes Critique of Dialectical Reason as an investigation into the ‘conditions under which dialectical reason can come to comprehend itself’ (7).

Dismissing Engel’s conception of a dialectics of nature, Sartre’s dialectical reason is located ‘in the contingent historical relation between human praxis and the situation in which the latter finds itself’ (54). For Sartre, praxis is the process by which human activity overcomes the material scarcity of a given situation (i.e. historically and geographically) and is, in this sense, a condition for freedom. Smidt explains that ‘[f]reedom is thus understood as interiorizing the milieu of scarcity (i.e., negating it) while at the same time re-exteriorizing a new condition, from objectification to objectification, that itself can be taken up in a new interiorization’ (4). The problem, for Sartre, is that praxis can be ‘serial praxis’ (3). Serial praxis is human activity giving rise to or sustaining alienated social relations, such as those described by commodity fetishism. Put differently, seriality refers to alienated social relations generated by activity under material scarcity (91). While there is a type of social unity under serial praxis, this unity is driven by ‘exigencies’ seemingly and/or actually imposed on a group, such as those demanded by capitalist forces and relations of production (92).

In chapters three to six, Smidt details and assesses Sartre’s answer to how praxis can escape serial logic. In the process, he compares and critiques Alain Badiou and Gilles Deleuze’s interpretations of Critique of Dialectical Reason in light of Sartre’s notion of the ‘apocalypse’ as a rupture from serial logic (117). While these sections of the book are erudite in their analyses, and a passing familiarity with contemporary continental philosophy is recommended, Smidt does a commendable job in explaining Badiou, Deluze and others in generally relatable terms. Glossing over the details significantly, Smidt outlines Sartre’s view of the apocalypse as ‘a moment of irruption whereby individuals, in a novel sense, comprehend the impossibility of living’ under the conditions the overbearing logic of seriality (124). For Sartre, the irruption from seriality, rather than the mere individual awareness of seriality, can only occur through group action aware of and in response to serial logic. To prevent the group from falling back into seriality, the group must ‘pledge’ to remain unified in light of both its past victory and future threats (141). Smidt refers to these dimensions of the group pledge respectively as ‘nostalgic’ and ‘imaginative’ (140). Smidt makes it clear that Sartre insists on the imminent threat of seriality imposing itself even on groups that attempt to remain united through their pledges (152). This gives some credence to the pessimistic readings of Critique of Dialectical Reason. However, Smidt also contends that there is always a hopefulness in the work and Sartre’s other writings that, despite the ‘persistence of seriality’, it is possible that ‘a socialist revolution would take hold’ (152).

Part two of Sartre, Imagination, and Dialectical Reason draws on Sartre’s early writings on the imagination to explain how the future-oriented aspect of the group pledge can be elaborated to justify and explain Sartre’s persistent hope in revolution. Here, Smidt outlines what he refers to as the ‘imaginative logic of action’ that allows groups to ‘perpetually contest the serial forces that constitute our worlds’ in a manner that does not succumb to utopian idealism (158, 167). That is to say, for both Sartre and Smidt, a truly liberatory use of imagination ‘must be committed to the concrete truths of material life’ (181). Through his analysis of imagination, Smidt argues that imagination is a necessary condition for the possibility of disalienated praxis, for sustaining a revolutionary group in collective action. Smidt locates the potential for imaginative disruption of seriality, for the imaginative logic of action, in the ‘gap between interiorization and exteriorization’ of dialectical reason, subjectivity itself (193).

While Smidt’s discussion of neoliberalism in the last chapter is helpful in providing a concrete example of serial logic, it is unfortunately brief and lacks persuasiveness as a result. For example, Smidt glosses neoliberalism as the ‘triumph of techne; of instrumental reason; of efficiency’, linking it to ‘increased IP protections; datafication’ (255, 256), and describes it as an ‘economic buttress that has emerged in the wake of postmodern legitimation crises’ (256). While some neoliberal theorists certainly prioritized instrumental reason (e.g. Milton Friedman), other important theorists, such as Friedrich Hayek, Ludwig Von Mises and Wilhelm Röpke challenged instrumental reason and scientism while also putting forward robust moral project (Slobodian 2018; Whyte 2019). The notion that neoliberalism unilaterally supports rigorous IP laws has also been complicated by recent research (Slobodian forthcoming). These relatively minor shortcomings do not ultimately undermine Smidt’s aims in articulating the conditions for an imaginative logic of action. However, adding nuance to the description of neoliberalism would have echoed Sartre’s own understanding that serial logic operates in a variety of contradictory ways and intensities. That being said, Smidt’s book is essential to anyone dealing with Critique of Dialectical Reason in a substantial manner and provides an entry point, especially in the exegetical sections, for those interested in a critical and well-articulated overview of Sartre’s positions. Smidt also opens a number of creative paths by which Sartre may be linked up with other Marxist traditions. For example, there are a number of parallels between Sartre’s conception of dialectical reason and Ilyenkov’s dialectics of the Ideal that could be explored further. On the one hand, Sartre’s conception of seriality can enrich Ilyenkov’s understanding of the Ideal by showing how praxis easily turn into serial praxis or ‘anti-praxis’ (3). On the other hand, Ilyenkov’s focus on class struggle can bolster the hopefulness that Smidt locates in Critique of Dialectical Reason.