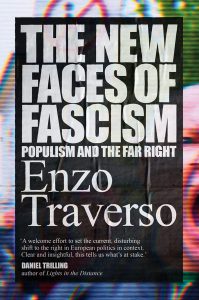 Enzo Traverso
The New Faces of Fascism: Populism and the Far Right

The first two decades of the twenty-first century have seen a dramatic resurgence of nationalist and fascist-type movements and parties throughout the world’s representative democracies. In a series of thematically-connected essays in his new book The New Faces of Fascism, historian Enzo Traverso explores the various forms that these developments have taken in the European Union and to a lesser extent the United States. Traverso divides his book into two parts: ‘The Present as History’ and ‘History in the Present.’ The essays in Part I provide a historically informed analysis of current right-wing political trends in the West, while Part II focuses more on developments in the recent historiography of fascism. The essays in Part I provide a careful sifting of terminology and a valuable discussion of the uses to which the various forms of the concepts of fascism, populism and identity are put in contemporary politics. As Traverso points out in the Acknowledgements, the book has its origins in an interview in Paris, so the essays in this section are a bit Francocentric in their approach, though they are certainly not limited in their scope.

According to Traverso, we are currently confronted with post-fascist movements, rather than classically fascist or neofascist. Traverso historically delimits the concept of fascism to its classical form in the interwar period. Neofascist movements are attempt to reinscribe and reinvigorate that original fascist ideology and politics in the context of postwar European politics. Though they share a historical continuity and exhibit considerable resemblance with fascism and neofascism in terms of authoritarian leadership and intense nationalist rhetoric, postfascist movements lack the cult of the state, having emerged in a fundamentally different context characterized by the neoliberal celebration of the market, the establishment of the European Union and the historic defeat of the left with the resulting dissolution of the post-war social-democratic compromise between capital and labor. The antidemocratic submission of the political process to the financial sector combined with the inability of the traditional parties on the left to formulate an adequate response to globalization along with the failure of the European Union’s neoliberal policy orientation to address the issues of employment security and wage stagnation have together generated right-wing populist and authoritarian nationalist movements. Ironically, such movements and the governments they support argue that they are a bulwark of the Christian West against its historic rival Islam and the threat it poses in the form of Islamofascism, and at least in the United States and United Kingdom, the parties supported by these movements advocate lower taxes on the wealthy and austerity for the rest of the populace.

Traverso holds that, as an anti-elite style of politics, populism also finds expression on the political left in the insurgent politics of Podemos in Spain, France Insoumise and the Bernie Sanders campaign in the United States, as well as various governments that comprised the Pink Tide in Latin America, though he also points out the fundamental difference between left populism and identity politics as a demand for recognition on the part of the excluded and oppressed as opposed to the right’s nationalist demand for exclusion of the Other, strict enforcement of borders and the imposition of traditional hierarchies. However, it should be added that in the context of US political history, nineteenth century populism was basically a rural movement of farmers that crashed on the shoals of racism and Protestant fundamentalism, a caution against identifying any left movement as populist as opposed to socialist, which is how Bernie Sanders describes himself. In current mainstream discourse, though, the concept of populism is sufficiently malleable that the designation of a movement as ‘populist’ has, in effect, become a self-defense mechanism on the part of elites seeking to preserve the hegemony of the neoliberal program against ideological challenges from both the left and the right.

In Part II, Traverso turns his attention to recent historiography of fascism, the discourse of totalitarianism and the impact of these reinterpretations on our political discourse. Traverso discerns a tendency to normalize fascism by incorporating it into national histories to the exclusion of anti-fascism. Furthermore, this emerging discourse supports the assertion of an equivalence between fascism and anti-fascism.

Traverso considers in detail the reinterpretations of fascism by historians, George Mosse, Emilio Gentile and Zeev Sternhell. Though different in emphasis and detail, all three adopt a methodology of interpreting fascism from within and as a break from the preceding interpretive traditions. Thus, they all understand fascist movements in terms of culture and ideology and maintain that such movements sought a fascist revolution. As a consequence of this approach, these historians underemphasize the role of anti-communism, the celebration of violence and the links to conservatism; instead, Traverso identifies fascism as a type of reactionary modernism.

Of grave concern to Traverso is the emergence of a form of anti-anti-fascism. Through its incorporation into various national histories, fascism is increasingly normalized, whereas antifascism has been rejected by historians such as Francois Furet as a mask for the totalitarianism of the left. Such developments feed claims of moral equivalence between fascism and anti-fascism. Pundits regularly make such claims about antifa organizations and their activities on major news channels in the United States.

Finally, Traverso provides a brief but useful account of the development of the concept of totalitarianism from its origins in the anti-Stalinist left to its articulation and use by defenders of liberal democracy during the Cold War. This shift corresponds to a geographical migration from Europe to the United States. In his discussion of this issue, however, Traverso omits the influential writing of Jeanne Kirkpatrick, the Reagan administration’s Ambassador to the United Nations, who, in a famous essay published in Commentary, distinguished between totalitarianism of communist regimes from the authoritarianism of Latin American military dictatorships. Reagan administration officials used this distinction to justify the embrace of murderous military regimes throughout Latin America, in particular the financing and training of Central American militaries engaged in near genocidal violence in order to prevent further social revolutions modeled after the Sandinista regime in Nicaragua.

We can conclude by deploying Traverso’s discussion of the difference between left and right populism as noted above as a point of departure and use it to argue that the left must definitively repudiate the characterization of its politics as populist and identitarian in favor of the project of emancipation. In the media coverage and public discourse that prevails in the United States, identity politics is associated with the political left, but a politics grounded on identity is better understood as a phenomenon of the political right. The white nationalism of the American alt-right is a case in point, as are the European far right movements from which the alt-right finds inspiration. While adopting an anti-elitist style, their political program seeks to preserve a hierarchical order through the exclusion of the Other (immigrants, minorities, women) in the name of an idealized and exclusionary construction of ‘The People’ in which only some actually count as the authentic bearers of a particular culture and history.

In contrast to assertions of a particular identity – racial, national, sectarian, etc. – as the basis of a political program, as is the case with postfascist movements, the emancipation of the oppressed involves appeal to the universalistic claim that all are equal and therefore entitled to rights. A dominant group can only justify its position by the purely particularistic claim that they are simply superior in some way to those who are subordinated to them, and any effort at human emancipation must then involve the repudiation of the superiority of some and the privileges that follow from it. Thus, demands for emancipation by marginalized groups, whether it be from patriarchy, white supremacy, heteronormativity or capitalism, is also an assault on the particularistic group identity of those possessors of privilege who define their identity through the exclusion of others by means of that marginalization.

Social movements that seek to advance the cause of marginalized populations may focus on forms of oppression directed at the particular identities of those marginalized groups, but the demand of those movements is fundamentally universalistic: emancipation as a matter of justice. However much it may have been challenged in recent decades, the metanarrative of emancipation, with its historical roots in the work of Kant and Marx, is the uniquely progressive metanarrative for the demand for emancipation from some form of oppression has consistently provided the unifying theme of progressive politics.