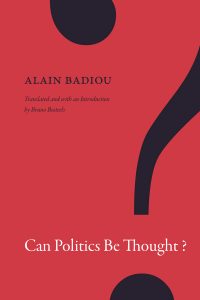 Alain Badiou
Can Politics be Thought?

In the 1920s, Carl Schmitt formulated ‘the political’ as a conflict between friends and enemies. On normal days, one can intercourse with the enemy until they knock at the door. Schmitt’s formulation is contextual but regressive. The political is exceptional; it comes in extreme situations and to respond the nation must be of one mind, blood and soil. Things like class don’t matter. They belong to economics, alien to the exceptionalism of politics and more at home with liberals and socialists.

Sixty years later, French thinkers on the left gave a more ontological and less contextual accent to the political. For Badiou, the crisis of the political in the East – Soviet bureaucracy – and the West – Reagan/Thatcher – in the middle of a renewed Cold War, ‘invites the philosopher to the determination of an essence. When the mediations of politics are clear, the philosopher’s imperative is to subsume them in the direction of a foundation’ (30).

Badiou’s title – Can Politics be Thought? – misleads. Badiou prescribes; he’s not asking. Like Parmenides for whom what exists can be thought and what isn’t can’t, Badiou thinks true politics equals true thought. They both should be ‘mobile, excessive, and unpredictable.’ The political, on the other hand, is non-thought; it exists falsely in State power and has ‘no intrinsic rapport with the truth’ (136). Employing the jargon of structuralism, existentialism and psychoanalysis, Badiou’s positions are exceptionally dualistic and Platonic, which gives the reading a moralistic taste. Badiou thinks the political is in retreat; it is the place of an absence, but the State maintains the fiction of the political against which politics (the true kind, the politics of the masses) ‘makes the hole of the event.’ Political philosophy always tells the same tale of the political, who is to be represented and counted, that ‘the fiction of a measure: the idea that the social bond can be measured in thought according to the philosophical norm of the good State, or of the good Revolution’ (32).

This fiction especially affected Marxism, says Badiou, because it pretends to measure the immeasurable, to calculate the social forces with the laws of political economy, to look for a hidden logic behind the events (the law of value, modes of production, etc.) and thus to invert or cover up Marxism’s insurrectionary moment with a disciplining political philosophy. Not only the fiction of the political infected the Soviets but also NATO democracies, and the problem lies in the hubris of such fiction to think it can represent and dominate the social bond objectively. The political causes both totalitarianism and parliamentarism and never constitutes real politics for the very notion of the State enters ‘the night of non-thought.’ The first task for Badiou then is to disengage politics from the political fixation, to free politics from the tyranny of meaning imposed by society and history. Politics is not ‘social.’ It’s not about uniting, bonding or gathering, but interrupting and dissenting. Moreover, following the late philosophy of Althusser, such politics sees history as chances and encounters without structural necessities or retroactive constructions that fix meanings or project some logic into history.

Of course, a new Marx emerges from Badiou’s politicist disavowal of history and society. Marx in Badiou’s picture did not really characterize the proletariat as a social class from which capitalists squeeze surplus value. The proletariat is now a hysterical symptom, a political capacity incapable of being static and defined by the State. Badiou’s analysis here lacks a speculative middle term, a frame that can provide a differentiated unity of opposites between a relative ethical life -the suffering conditions of an historical proletariat- with an absolute ethical life, the utopian ideal of a proletarian revolt that wants to abolish itself as a class. Badiou asks the reader instead to throw out the former and keep the latter, to take a leap of faith and waive all of Marxism’s objective foundations, the analytics of historical materialism, the law of value as well as the practice of party organization. Badiou then declares Marxism’s death, whose theory is a reactionary political fiction, and replaces it with the absolute of a Communist spirituality. To keep Marxist ‘objectivity’ as Communist parties did is to be Orthodox, to become their object, a prisoner, a useful idiot of the political. And to recover what Marx stood for is only possible ‘without Marxism’ through an operation of purification and subtraction more attuned to the philosophical spirit of ‘an eternal concept of rebellious subjectivity’ (116).

Instead of historical materialism or another ‘grand narrative’ of the political, Badiou aligns himself with the then dominant postmodernist rhetoric and chooses the oracular voice, itself a grand narrative of aporias and declarations, to propose his program of an eternal communism. The re-composition of Marxism means now ‘to inhabit the inhabitable,’ ‘a recommencement’, ‘a return to the source’ (63-64). Ontology applied to the political takes us now to the truth of practical politics. Economics and history are mere window dressings. Again, Badiou throws away political economy and redefines Marxism with the philosophies of Heidegger and Lacan. Marxism is not (or should not be) a doctrine, but a theory of the subject. ‘It is the name of the One for a network made of political practices,’ ‘the consistency of a political subject, of a heterogeneous political capacity,’ ‘the life of a hypothesis.’ (60-61)

This new Marxism or communism represents a Platonic invariant, incommunicable, un-representable, a more fundamental subjectivity of courage. This new Marxism ‘touches the real;’ it is dialectical in that it destroys oppositions ‘to reach an unrepresentable point in its field’ (85). Examples of this dialectic are Mallarmé’s poem, (neither the poet nor the world), Pascal’s wager (neither God nor non-God), Lacan’s idea that nothing can represent the subject or Rousseau’s disgust for representation because the general will cannot be represented. After the so-called historical death of communism, Badiou wants to give the word a non-temporal, non-historical resonance. Communism in its absolute sense becomes an empty (formal) series of desiderata and injunctions: justice, equality, altruism, intolerance to oppression, anti-statism, militancy, etc. In short, an ethics that doesn’t dig into the proper political question of how to seize power to organize the social satisfaction and recognition of needs with principles of justice based on democratic rule.

Badiou’s idealist repudiation of history, structure and context indeed makes for a curious reading. For instance, Badiou writes: ‘When I say, “we communists,” and even more so when I think of Lenin […] or when I think of the Russian Revolution, I do not think of the Party, the Party that I have always fought against’ (112). But the Russian Revolution, the first communist revolution of the twentieth century, was a long process which included not only the masses but also the Russian Social Democratic Labor Party doing boring work at the duma. Lenin was a member of parliament twice the time for which he’s most famous. Despite the Red Army saving the world from the Nazis, Badiou falls into generalizations and thinks the Kremlin practiced the Gulag version of the Western political. Again, one asks for more nuance, what for Badiou is outside the political East and West? Is it only the insurrectionary moment, the social movement, the permanent revolution? And for all his denunciations of State power in the name of the masses, Badiou overlooks important mass political events of the 1980s to quickly bury historical Marxism. Badiou writes: ‘The historical destruction of Marxism means nothing less than its death, as a universal event of political thinking […] It no longer has the power to structure real history’ (58).

Whatever the name Marxism means in differing national contexts, Badiou’s news of Marxism’s demise is greatly exaggerated. Sandinistas seized power in the most poetic of Latin America’s revolutions and then resisted Reagan’s bombs for the next ten years. Sankara began in Burkina Faso the most radical socialist reforms in Africa until French agents got rid of him. Angola waged a life and death struggle for independence with an unconditional Cuba. The FMLN launched a final offensive that made El Salvador’s death squad regime pact a transition. Badiou ignores all these and chooses Iran’s Islamic Revolution and Poland’s Solidarity as examples of politics. Badiou even calls Vietnam’s new revolutionary government ‘militaristic and expansionist’ (54), because Vietnam became a State and presumably because Victor Charlie invaded next door to stop the Khmer Rouge carnage, a regime that Badiou defended then. Badiou’s sweeping generalizations are cute but provincial. They also beg the question and suffer from selection bias. One doesn’t cherry-pick examples to confirm a point. Marxism-Leninism was never really a chemically pure workerist ideology as he typifies it. Marx and Lenin’s critiques of capitalism and imperialism always addressed the collusion of class and national oppressions. Historically, to separate domestic working-class politics from colonial or international struggles before or after the Russian revolution is not possible. All these countries above waged anti-colonial revolt under some Marxist influence, maybe more here and less there.

Finally, the dialectical formulation of communism as an un-representable subjectivity replaces one fetish for another, the Party nomenklatura with voluntarism à la Rousseau or Mao -Badiou’s heroes. Yet for such empowerment of the revolutionary subject, Badiou’s tone is passive and fuzzy. A militant politics rejects party organization since parties ‘receive their real qualification only from the State’ (103) yet organization is needed but of a different kind, independent of the State, centered on ‘the future perfect’ in that the desire, the anticipation named now will have been realized in practice in the future (‘the withering away of the state’), fulfilling the past (101-102). Unfortunately, the shape of things political, including the State, are stubborn (that’s where the autonomy of politics lies) and to criticize justly the failures of socialist states or the inertia of representative institutions to then advance an ethos of the hero rebutting all State-forms is not to think politics, but theology.