Marx & Philosophy Review of BooksReviews‘Radical Utopianism and Cultural Studies: On Refusing to be Realistic’ by John Storey reviewed by Philip Bounds 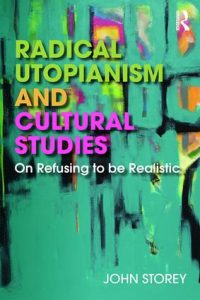 John Storey
Radical Utopianism and Cultural Studies: On Refusing to be Realistic

Philip Bounds is a historian, journalist and critic. He holds a PhD in Politics from the University …

Is there any role for utopian forms of thinking in contemporary radical movements? John Storey’s new book is a stimulating attempt to answer that question. The debate in which it seeks to intervene has been a noticeably polarised one. Taking their lead from Marx and Engels, both of whom launched scathing attacks on the so-called “utopian socialism” of Owen, Fourier and Saint-Simon, many people have dismissed utopianism as an interesting but obsolete precursor of scientific socialism. Their argument goes something like this. In an age when the socialist alternative to capitalism was beginning to take shape, utopian speculation played an important role in undermining support for market institutions. Now, when Marxism has long since provided a fully scientific account of how societies evolve, there is no longer any need for the beautiful dreams of a Fourier or an Owen. Indeed, there is a case for saying that utopian socialism’s more extravagant tropes ˗ rivers running with lemonade, beautiful women disporting themselves seductively on the factory floor ˗ amount to little more than an infantile distraction from the brute realities of the class struggle.

At the opposite end of the spectrum are those who respond to the siren voices of utopia with considerable enthusiasm. Pointing out that Marx and Engels were by no means as hostile to utopian socialism as is sometimes supposed, they have argued that the utopian imagination still has a role to play in fertilising the desire for a more just society. The pro-utopian element in the Marxist tradition stretches back more than a century and encompasses some exceptionally talented thinkers. Marxists have devised a number of compelling fictional utopias, some of which ˗ William Morris’s News from Nowhere is the obvious example ˗ have gone a long way towards providing working-class militants with a sense of what a genuine proletarian democracy might look like. More analytical thinkers have theorised the idea of utopia with unparalleled sophistication. Ernst Bloch’s titanic three-volume study The Principle of Hope is one of the most important works of Marxist cultural theory, while Fredric Jameson’s sparkling essays on literary utopias provide a cheering counterpoint to his gloomier account of postmodern culture. Bloch’s famous distinction between Marxism’s “cold” and “warm” streams is surely well taken. Whereas the cold stream’s painstaking explication of the laws of history provide us with the analytical wherewithal to change the world, the warm stream’s radiant fantasies inspire us to embrace a life of tireless activism.

In its concise, clear if occasionally over-rhetorical way, Radical Utopianism and Cultural Studies comes down firmly on the utopian side of the argument. Although the book is ostensibly addressed to practitioners of Cultural Studies ˗ an academic discipline whose perspectives Storey has done much to popularise ˗ its real focus is the relevance of utopianism to contemporary left politics. Endorsing the idea that utopian desire can galvanise resistance to the status quo, Storey bases his argument on the distinction between “blueprint utopianism” and what he calls “radical utopianism” (1f). The former consists of detailed, synoptic visions of a better future which make little or no explicit reference to the present. By contrast, the latter seems to exist in a space between the present and the future, evoking the miseries of the existing order while outlining a possible alternative. The foundational text of utopian radicalism is undoubtedly More’s Utopia (1516), which ˗ in spite of some notable ambiguities ˗ succeeds in combining a withering critique of Tudor England with a charming portrait of the sort of “no place” where all contemporary problems have been overcome. While Storey recognises that the distinction between blueprint utopias and radical utopianism isn’t always watertight, his clear preference is for the latter. In a nod to the sort of Gramscian perspective for which he has elsewhere voiced his support, he argues that the great virtue of radical utopianism is that it “defamiliarises” the status quo. By juxtaposing the present against the vision of a better future, utopian radicals help to wean people off the disabling assumption that the existing order is somehow set in stone. Nature stands revealed as a species of culture.

In order to clarify his ideas about the social function of utopianism, Storey explores a metaphor which Marxists have been using for over a century. Back in 1884, shortly after the establishment of the Socialist League, the arch-utopian William Morris declared that his purpose in the socialist movement was to “educat[e] people into desiring it [i.e. a better society], next organising them into claiming it” (5). The idea that utopia somehow seeks to channel people’s desires in politically desirable directions has cropped up time and again since then, notably in the work of Ernst Bloch, Paul Abensour and E.P. Thompson. Although Storey embraces it, he realises that it raises a number of thorny issues. Where does desire come from? To what extent does utopia have a cognitive as well as an emotional or affective dimension? How exactly can desires be translated into concrete political impulses? Questions like these hover over the pages of Radical Utopianism and Cultural Studies. Although Storey answers some of them more persuasively than others, he does well to remind us that some of the most potent forms of political commitment arise out of a well-nigh erotic attraction to a body of heretical ideas.

Fredric Jameson has suggested that many utopian texts evince a gloriously random quality, providing a space in which the author can pile one obsession on another like a half-crazed inventor in his personal workshop. It is no criticism of Storey’s book to say that it instantly calls Jameson’s remarks to mind. When he furnishes us with case studies of his theory of radical utopianism, Storey trawls through literary, cultural and political history with commendable eclecticism. One of the book’s virtues is that it attaches as much significance to utopian events as to utopian texts. At its heart are three brief but illuminating chapters on the Diggers’ revolt during the English Civil War, the Paris Commune of 1871 and countercultural experiments in the Haight-Ashbury area of San Francisco in the late 1960s. Storey’s engagement with these matters isn’t especially original, but he does a good job of evoking the bewilderingly unpredictable soil in which utopian movements often arise. His student readers will especially enjoy his account of the astonishing effect of LSD on the minds of disaffected American youth in the 1960s. Older socialist hands will find much of interest in his remarks about the Diggers’ highly politicised version of Christianity and the effects of dual power in the Paris Commune. By contrast, though his chapter on Thomas Moore is illuminating, his treatment of certain other utopian thinkers – Morris, Marcuse, Paul Mason ˗ is perhaps too brief and imprecise to be entirely useful.

Like many of Storey’s other books, Radical Utopianism and Cultural Studies is intended as an introduction. Its lucidity makes it a particularly useful text for students and activists who are approaching the subject for the first time. On the other hand, its status as an introduction means that several crucial issues go unexplored. There is, for example, the intractable business of precisely what Morris and his successors mean when they talk about educating desire. Storey is clearly right when he says that radical utopianism’s deft interweaving of the present and the future serves to defamiliarise the status quo while setting us on the road to a better society. But this is only the start of the matter. One of the things Storey fails to address explicitly is the subject matter of utopian texts. It is clear from his range of examples that he favours texts and movements which challenge the institution of private property, but there are many utopian thinkers whose focus is entirely different. Must the contemporary left stick rigidly to anti-capitalist utopias or should it seek to identify the progressive kernel in other texts and movements? After all, as Ernst Bloch has pointed out, there is a case for saying that all utopias ultimately project a vision of non-alienated existence, regardless of their precise ideological commitments. Exactly how far should the left cast its net? And to what extent can it ensure that utopian texts are interpreted in politically congenial ways? As a Gramscian like Storey knows very well, the meaning of texts is partially determined by a process of cultural struggle. In the absence of any guarantee that a text will automatically be perceived as progressive, we need to have a clearer sense of what the left can do to win the battle of interpretation.

The other issue which Storey fails to address in enough detail relates to the dark underbelly of utopia. As innumerable thinkers from Burke onwards have pointed out, utopian aspirations are not always an unalloyed blessing. The frustration of the desire for a better world leads all too easily to the breakdown of common decency. Although Storey acknowledges the existence of the anti-utopian case, his response to it is unsatisfactory. Indeed, his discussion of the potential dangers of wanting too much is largely displaced onto an interesting but unresolved discussion of the status of desire in the work of Lacan, Bloch and Oscar Wilde. Nowhere is the nightmarish legacy of political defeat ˗ gulags, firing squads, constitutional vandalism ˗ brought into clear focus. (Storey is good at describing the barbarism with which the existing order has responded to utopian movements, but that’s not the same thing.) Storey would perhaps want to say that an apologist for utopianism is under no obligation to give credence to his opponents’ beliefs, but to take that line would be to surrender to complacency. As a distinguished university teacher, Storey knows that not all the student radicals he addresses can be relied upon to behave with propriety when their beliefs are frustrated. The ongoing story of campus illiberalism is a grim tribute to the dangers of utopian excess, even though only a small minority of students aspire to suppress other people’s rights. Those of us who recognise the value of utopianism need to give some thought to how its dangers can be minimised ˗ or, to put it another way, how the political culture of the left can be so arranged as to hold millennial enthusiasm and necessary caution in some sort of creative balance. When the beautiful dreams of the young and not-so-young are confounded, how can we keep the lights on?