Marx & Philosophy Review of BooksReviews‘How America Became Capitalist: Imperial Expansion and the Conquest of the West’ by James Parisot reviewed by Wendy Matsumura 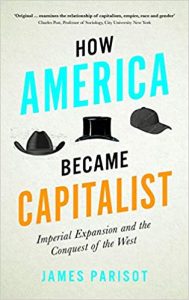 James Parisot
How America Became Capitalist: Imperial Expansion and the Conquest of the West

James Parisot, the author of How America Became Capitalist: Imperial Expansion and the Conquest of the West introduces the book as one that ‘tells the story of how a society with capitalism became a capitalist society’ (2). He defines capitalism as ‘a social order in which practically all aspects of social life are organized around capital accumulation and the extraction of surplus value from a variety of labor forms’ (11). For him, the transformation of the United States from a society with capitalism into a capitalist society was mediated by empire-building, a process that he argues, was deeply rooted, at least in ‘idea and imagery’ from the founding of the post-Revolutionary state (2). Finally, he argues that this idea and imagery were grounded in relations and visions of gendered and racialized difference that were aimed at upholding white masculinity (16).

Illuminating these processes from a historical materialist frame that also takes class struggle, uneven development and politics seriously – what he calls a ‘multi-linear complexity’ – is an ambitious undertaking that Parisot masterfully accomplishes through his careful selection of multiple nodes of development meticulously analyzed at various scales over two and a half centuries. He narrates a story of the formation of US capitalist society that starts with the early colonization of British North America and ends with the late-19th century westward expansion driven by railroad, mining, and agribusiness. Throughout the book, genocide against Native Americans and the enslavement of black people operate as: foils to visions of white domesticity that rationalize exceptionalism and empire; obstacles to the creation of smooth spaces for capital through their refusals to be subjugated, re-enslaved or proletarianized; and as mass casualties of US continental imperialism.

Chapter 1, titled ‘Origins of Colonial Society’ begins with a study of how the fates of the Virginia and New England colonies diverged as a result of their different relationships to European colonialism. The question of why Virginia came to rely on slavery and why New England came to rely primarily on the patriarchal family form is answered by examining the divergent ways that dominant capitals in each region established control. Whereas the Virginia Company relied upon the labor of young workers, indentured servants and slaves within a system of private property it established in the late 1610s, the New England Colony’s Puritan ethic prioritized the settlement of families including indigenous peoples that were organized along a religious hierarchy rather than speculative profit-seeking. Each relied upon forced laborers and enslaved populations, but the way that these groups became incorporated into the colony as labor force differed quite dramatically. Further, while gender relations took shape differently in each context, Parisot notes that the ‘social reproduction of the patriarchal family drove empire westward,’ suggesting that the heterogeneity of capitalist relations in Virginia and New England collapsed to some extent as settler colonialism expanded spatially (45). The imperial expansion of a mode of production based on a patriarchal familial form that depended upon the labor of indentured servants and slaves for its reproduction was part and parcel of the creation of the United States as a capitalist society. Such a reading adds to recent critiques by Charles Post and Peter James Hudson of New Histories of Capitalism by placing the enslavement of black people and the dispossession of Native American people at the center of his story of the uneven development of US capitalism. In addition, by emphasizing the importance of the idea and reality of the patriarchal family to settler colonialism, it also engages the literature on social reproduction theory that emphasizes the importance of attending to the production and reproduction of life beyond the factory floor when thinking about the way that capitalist social relations are maintained.

Chapters 2 and 3 moves spatio-temporally by tracing the processes of white settler expansion into Massachusetts, New York, Pennsylvania (chapter 2) and Kentucky and Ohio (chapter 3). In both chapters, Parisot argues that competition for control by different imperial interests set the stage for genocidal violence against native people and the growth of the patriarchal household mode of social reproduction as a technique of white settler domination in these regions. Here too, Parisot balances regional specificity with the desire to construct a clear narrative of the eventual formation of a capitalist society.

‘Slavery and Capitalism’ is the title of chapter 4. Beginning with W.E.B. Du Bois’s thesis that at the root of the Civil War lay a contest over the degree to which slavery should continue to drive industrial development in the United States, Parisot clarifies his position on a debate, ‘was the old south a society with capitalism or a capitalist society?’ (113). He answers this question by saying that while southern plantations were capitalist institutions, not all of the south was organized according to plantation slavery. He argues, therefore, that not all of the south was capitalist: ‘Like capitalism further north, the south was a complex amalgam of different types of social labor. And this social order was held together through gendered and racialized social relations.’ He further argues that slavery played an important role in building ‘white supremacist solidarity amongst different classes of whites’ – a practice that aided in constructing the ideology of the frontier (120). His intervention into this debate felt like the perfect opportunity for Parisot to clarify his stakes a bit more explicitly and to explain why it matters today to make this particular intervention into the debate on slavery and capitalism.

The final chapter, titled ‘The Consolidation of American Capitalism’ takes us into the mid-19th century, what he calls the era of the consolidation of American capitalism. Here, he clarifies that consolidation means the formation of a society in which expansion would be ‘driven primarily by the power of capital’ (161) rather than the more passive movement of people outward through dispossession or the creation of something resembling a manorial system like the one he traces in Chapter 2. Parisot refines his definition of the ‘power of capital’ then, to mean not only capitalists developing the West in order to realize surplus value but the amalgam of social relations that developed to support the formation of an industrial working class and the attendant dissolution of the countryside. The Civil War is a central part of this story. Parisot weaves the multiple narrative strands that he presented in the preceding chapters together to argue that the north and south, both complex, capitalist social-economic formations in their own right, clashed over whether or not slavery would be allowed in the western territory. This was not, Parisot emphasizes, ‘a battle between capitalist and slave modes of production,’ but a clash between ‘two increasingly ‘modern’ forms of capitalism that pushed different imperial strategies and politics’ (167). Though he does not develop the point in-depth, Parisot argues that legislation passed in the midst of the Civil War regarding the currency system, the taxation system, immigration, and the land system reflected the reconstitution of the state’s relationship to capital in a manner that enabled what he called the ‘final phase of continental empire-building…by the power of capital’ (188).

As I stated at the outset, this is an ambitious book that engages various theories and debates within Marxism. As a historian of modern Japan, I particularly appreciated Parisot’s willingness to engage an analysis that discarded with conventional periodizations in favor of one that did not take the US state as the privileged frame of analysis and instead, approached the consolidation of US capitalist society as an outcome of contingent historical processes that engaged competition between multiple imperial formations despite the exceptionalist ideologies that were deployed by politicians and capitalists. I highly recommend this book to anyone in search of a model of historical materialist scholarship that does not take the nation-state form as a given unit of analysis.