Marx & Philosophy Review of BooksReviews‘Demarcation and Demystification: Philosophy and its Limits’ by Joshua Moufawad-Paul reviewed by Jude Welburn 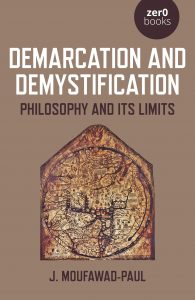 Joshua Moufawad-Paul
Demarcation and Demystification: Philosophy and its Limits

Jude Welburn is a sessional lecturer at Wilfrid Laurier University and the University of Toronto. …

In his Theses on Feuerbach, Marx famously concludes that ‘philosophers have only interpreted the world, in various ways; the point is to change it’ (423). This thesis, inscribed as an epitaph on Marx’s tombstone, casts a shadow over subsequent theorizing and has in turn been subject to various interpretations. Was revolutionary praxis to negate or realize the work of philosophy? In the malaise of late capitalism, does philosophy ‘live on’, as T.W. Adorno puts it, ‘because the moment to realize it was missed’ (3)? What does it mean to practice philosophy as a Marxist in the shadow of the eleventh thesis?

This last question is the motivation for J. Moufawad-Paul’s recent book, Demarcation and Demystification: Philosophy and its Limits, published by Zero Books. If philosophers cannot change the world, Moufawad-Paul writes, by intervening on the terrain of theory, philosophy can still ‘provide the tools capable of clarifying world-changing movements’ (15). Challenging established interpretations of the eleventh thesis that tend to exaggerate or dismiss the role of philosophy, Moufawad-Paul argues for its continued relevance to Marxist political theory and practice while also defining and delimiting the function of philosophy in relation to a theoretical terrain that necessarily exists outside of and prior to the intervention of philosophy.

Demarcation and Demystification is a compelling and accessible account of Marxism as a philosophical problematic and explores some of the possibilities and impasses of a philosophical practice committed to revolutionary change. Touching on various interpretations of the Theses on Feuerbach, from Adorno to Louis Althusser and Alain Badiou, Moufawad-Paul offers an immanent critique of Marxist formulations of ‘Marxist philosophy’, while critically engaging with other (poststructuralist and new materialist) attempts to negate or supersede philosophy, such as François Laruelle’s ‘non-philosophy’. The historical materialist tradition, Moufawad-Paul contends, continues to generate a uniquely reflexive and politically committed mode of reasoning capable of defining the limits and transformative potential of philosophy.

Chapter 1 of Demarcation and Demystification explores the intellectual and historical context for the Theses on Feuerbach, arguing that the event of Marxism introduced a decisive break with enlightenment political philosophy, or more specifically, a break with an idealist and foundationalist understanding of the role of philosophy in relation to science. This idealist formulation, epitomized by the works of Kant and Hegel, frames philosophy as logically prior to scientific practice since the function of philosophy was to provide the ontological scaffolding that structures the operations of theory. The Marxist ‘break with philosophy’ was really, Moufawad-Paul writes, ‘a break from its central conceit, that philosophy is the foundation of knowledge’ (20). Instead, Marxism sought to establish the truth-content of scientific social theory on a material basis, historicizing the subject of history and generating social explanations for social phenomena with an aim to effecting their transformation. However, because the relation of philosophy to theory was never the central concern of Marx’s work, and became less and less significant as Marx and Engels moved past direct engagements with Hegel and Feuerbach, later theorists discovered that ‘Marxist philosophy’ was an unfinished project, and tended to ascribe the failure of modern communist movements to a lack of coherent philosophical foundations.

This desire to ground Marxism in and with philosophy, Moufawad-Paul argues, is an error—a fundamental misunderstanding of the relation of philosophy to theory in the Marxist tradition. One of the key insights of Moufawad-Paul’s book is the distinction he draws between ‘theory’ and ‘philosophy’, terms that are often conflated in a variety of contexts, leading to confusion regarding the role and effect of the philosophical intervention, which occurs on the terrain of theory but is not to be confused with theory. Chapter 2 sets out to define this relationship, developing the metaphor of the ‘theoretical terrain’ in order to distinguish the work of the theorist or scientist from the work of the philosopher, whom Moufawad-Paul describes as a cartographer on the terrain of theory. A given field or province of the arts or sciences can develop according to its own internal logic quite independently of philosophical reflections, and philosophy cannot, Moufawad-Paul argues, really participate directly in the development of that field except insofar as it intervenes to define terms, mark conceptual distinctions, and clarify the function and validity of existing truth-procedures. The philosopher as philosopher does not do physics, say, or mathematics, although there can of course be a philosophy of physics (and a broader philosophy of science) in which physicists and philosophers both participate. Philosophy is, according to Moufawad-Paul, an intervention on an existing terrain of knowledge enacted to force meaning and provide conceptual clarity, but it is not theoretical practice as such. When it attempts to generate theory on its own, out of its own conceptual tools, it ends up deforming the theoretical terrain on which it operates, spinning out speculative ontologies that are essentially mystifications—maps that confuse the distinction between map and territory. But while the philosopher as architect may build fantastical castles in the air, the philosopher as cartographer is a mapper of meaning; she does not attempt to generate or transform the terrain as such, but traces its contours, ‘draw[ing] routes and boundaries through what is already presented’ (52)—lines of passage and lines of demarcation that orient us in relation to the given theoretical terrain.

The philosopher’s work, according to Moufawad-Paul, is this practice of demarcation—drawing distinctions within a conceptual field, but also drawing these lines in fidelity to a terrain that is itself in motion, helping it to develop according to its own processual logic. While history is overdetermined by a multitude of causes, the concrete processes that shape the theoretical terrain of historical materialism, the ‘motions of history’ that it traces and seeks to understand through active transformation of these processes are determined, in the last instance, by class struggle; historical materialism thus understands history as the history of class struggle. It is this key insight that initiates a break with philosophy-qua-philosophy, requiring us to view the history of ideas as itself shaped by class struggle. ‘[A]ny intervention upon this terrain, any attempt to map and force its meaning, is performed from a position that is embedded within social classes’ (60), Moufawad-Paul writes in Chapter 3, and so the philosophical intervention on the terrain of theory never comes from a purely objective position unmoved by the processes in which it intervenes. The philosophical intervention on the terrain of history is itself conditioned by the forces that shape that terrain; for the philosopher, as for the theorist and activist, there is no outside to class struggle.
The fact of our social embeddedness, however, does not mean we are simply determined by the social processes that condition our thinking. While, for example, the concept of a ‘marketplace of ideas’ is only thinkable within a specific social and historical context, and ‘one cannot imagine [J.S.] Mill’s arguments on behalf of liberty without the ideology of the free market’ (65), both Mill’s concept of liberty and the social relations of production that are its necessary conditions are sites of contestation and struggle. So it is for all philosophical interventions; they do not transcend their social conditions nor are they mechanistically determined by them. The aim of the philosophical intervention, according to Moufawad-Paul, is neither unconditioned objectivity nor performative deconstruction of the ‘philosophical decision’ (to use Laruelle’s terminology); for the historical materialist, this intervention is simply understood as an act of interpretation that aims to clarify or demystify an existing theoretical terrain. The intervention of philosophy, Moufawad-Paul argues in his final chapter, is really ‘a second-order dialogue concerned with making sense of the meaning between the concrete and theoretical spheres so as to grasp the boundaries of a theoretical terrain’ (188). ‘Although the sphere of philosophy is not part of the dialectical circuit of the other two spheres’, Moufawad-Paul writes, ‘its practice is motivated by a political decision that is necessitated by this circuit’ (190). Philosophy intervenes to clarify the terms of the political decision, ‘[b]ut this intervention is never uncompromised … and the practice of philosophy is also altered at the moment of intervention, forcing another political decision that again motivates another philosophical decision, and the cycle of intervention continues in tandem with the circuit [of theory and practice] that it bisects’ (190).

The intervening chapters of Demarcation and Demystification examine the problematic of ‘clarity’, and provide an account of the philosophical intervention at its extreme limit, as a demand, not only for clarity, but also the ‘annihilation’ of particular theoretical terrains. These chapters engage with the works of Althusser, Badiou, and Laruelle, analyzing their contributions in relation to our understanding of the role and the limits of philosophy for political theory and practice. While often critical of their presuppositions and conclusions on the basis of a commitment to demarcating the terrain on which these philosophers operate, Moufawad-Paul underscores the useful observations and formulations that each has made, sometimes borrowing from (and altering) their key concepts. Moufawad-Paul’s work, in other words, models the philosophical practice that it aims to elucidate. While his key metaphor, the concept of the ‘theoretical terrain’, can sometimes be ambiguous—is the vehicle of his metaphor physical or social geography?—it has an illuminating effect in the context in which it is deployed. Moufawad-Paul is careful to note that the ‘theoretical terrain’ is not an ontological category but a metaphor only, and so, like a map, it is an illustrative model of a thing and not a perfect image of the thing, much less the thing itself. A map works because ‘we can chart our course in a terrain with which we might lack familiarity’ (56); for the map to function, it cannot, pace Jean Baudrillard, become the territory, nor should it aspire to such a transformation. The question is not whether it reproduces every detail of the terrain, but whether we can orient ourselves by it. If we cannot orient ourselves by way of the map, then it must be discarded or redrawn. Demarcation and Demystification is a provisional sketch of such recursive map-making, and so it remains open to future transformations, both of the map and the territory.