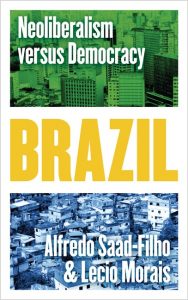 When Jaír Bolsonaro was elected as Brazil’s president on 28 October, 2018, many people wondered how such a person could get elected. How could Brazil go from being a progressive Latin American country with a strong workers’ movement, to one ruled by a fascist who admires the Brazillian military dictatorship? The best starting point for studying the Brazillian social formation is Brazil:Neoliberalism Versus Democracy by Alfredo Saad-Filho and Lecio Morais. The book gives an overview of Brazil’s military dictatorship years, the mass movement that led to democratisation, the rise of the Workers Party, and the years that Lula was president. Although the book came out before Bolsonaro got elected, it provides the reader with a Marxist analysis of the class dynamics that created the conditions for Bolsonaro’s election. In this way, it is a foundational text that one can read in order to access other works on Brazillian politics.

The first two chapters give an overview of the economic policies that were in place during the military dictatorship years from 1964-1985.  In post-war Brazil, the system of accumulation operative in Brazil was import-substitution industrialisation (ISI), which is “driven by the internalisation of the production of (previously imported) manufactured goods and ancillary services, in order to alleviate balance of payment constraints, create employment and incorporate new (‘modern’) technologies” (16). This system of accumulation helped to develop the productive forces in Brazil, created an advanced manufacturing sector, and accelerated the growth of the Brazillian capitalist class. At the same time, it created a large working class and strong trade union movement, as well as high amounts of poverty resulting from the concentration of wealth.

Saad-Filho and Morais point out that an important feature of this period was that Brazil became a close ally of US imperialism. In a way similar to post-war South Korea, the Brazillian bourgeoisie created a favourable business environment for American corporations, and Brazillian companies became suppliers of natural resources and minerals to the United States. Even though Brazil became a manufacturer of steel, electronics, and some capital goods, it was largely dependent on the United States for loans and industrial equipment in order to meet local demand for goods. Hence, the authors point out that “far from closing the economy, ISI increased the country’s external dependence” (17), with dependent industrialisation characterising its path to development. While post-war Brazil saw high economic growth, Saad-Filho and Morais show that the economic and financial policies of ISI was inherently unstable, and resulted in an economic crisis during the 1970’s.

Saad-Filho and Morais show that the two forms of the state associated with ISI were populism and authoritarian dictatorships. In the early sixties, Brazil briefly had a progressive leftist government under João Goulart, which received support from sections of the internal bourgeoisie and the trade unions. In 1964, a right-wing coalition backed by the military and assisted by US imperialism overthrew Goulart’s government. The alliance that supported the coup included “internal manufacturing capital, foreign capital, traditional landed interests and the urban middle class” (22). After the coup, most opposition groups were banned, the state assumed control of the trade unions, and the National Renewal Alliance (ARENA) became the ruling party.

Saad-Filho and Morais demonstrate how the Brazillian social formation articulated a split in the capitalist class. First, there is the internal bourgeoisie, which “includes the leading capitalists in construction, agribusiness, food-processing, and other domestically-owned conglomerates” (127). The internal bourgeoisie backed the leftist administration of Goulart (and later Lula) and sought to make Brazil more independent from imperialist domination. While they were not anti-capitalist, they supported progressive pro-worker reforms and sought alliances with other progressive nations. On the other hand, there is the internationalised bourgeoisie, which “includes the owners of financial capital…transnational and internationally-integrated manufacturing and the mainstream media” (127). The internationalised bourgeoisie, which backed the military dictatorship, collaborated with imperialism and had close ties with the United States. This section of the bourgeoisie wanted to create a Brazil that would be favourable to foreign direct investment, with low wage labour and unequal distribution policies.

One of the most interesting parts of the book is the discussion of the democratic movements that brought down the dictatorship. Because of the inefficiency of their economic policies and the brutal methods by which it ruled, a democratic mass movement developed in the 1970s. The result of the peoples movement against the military dictatorship was the Workers Party (PT), which formed in 1980 out of the strike wave and included Luiz Inacio de Silva (Lula) as its leader. Saad-Filho and Morais describe the PT as a democratic socialist mass party that was successful because it was able to represent not just the organised working class, but sections of the middle class, such as teachers and civil servants. Under the leadership of the Workers Party, the mass movements brought down the military dictatorship in 1985, and created a bourgeois democracy with free elections, free press, political pluralism, and a strong social welfare state.

Saad-Filho and Morais make a very important observation about the process of democratisation. Because the dictatorship was no longer an efficient political form, and because ISI could not deliver economic growth, the internationalised bourgeoisie eventually supported democratisation in 1985. Although the new democratic Brazil created many new freedoms, capitalism had not been abolished. Instead, the internationalised bourgeoisie continued to rule Brazil and changed the system of accumulation from ISI to neoliberalism. The effects of neoliberalism in Brazil were increased poverty and unemployment, insecure employment patterns, high inflation, and domination by transnational corporations.

Saad-Filho and Morais point out that during the 90’s, the PT was transformed from a socialist, anti-capitalist party, to a more traditional social democratic one. In order to get more votes, they began collaborating with the internal bourgeoisie and neutralised some prominent PT leftists. Although it remained the political wing of the trade union movement, the PT received support from business leaders, and sections of the middle class. They even formed alliances with right-wing political parties, such as the Liberal Party (PL), which “helped to neutralise the reservations of the religious right about the PT” (83). It was this opportunism that helped Lula get elected in 2002.

When Lula became president in 2003, the Workers Party created a strong social welfare state in order to alleviate some of the effects of neoliberalism. For example, one of the hallmarks of the PT-era was Bolsa Família, which was a targeted cash transfer programme “comprising small transfers to households that are either extremely poor or highly vulnerable to deprivation, especially those with children” (103). Bolsa Família reduced extreme poverty by 16% between 1999-2009, increased school attendance by 4.4%, and lowered unemployment. Saad-Filho and Morais point out that while Bolsa Família was progressive, it reflected the neoliberal orientation of the PT, for it was not universally accessible and administered on a targeted basis.

In order to retain support from sections of the bourgeoisie, the PT often embraced neoliberalism. Just prior to being elected, Lula consented to a new IMF loan of thirty billion US dollars, which “opened the doors of financial institutions and conservative governments to the PT, and virtually ensured his election” (85). In all the years that Lula was president, he never fundamentally altered Brazil’s neoliberal policies, integrated Brazil into international financial institutions, and gave Brazillian bankers and capitalists high positions in the state.

Because the PT prioritised Brazillian companies such as Petrobras, and shielded Brazil from domination by transnational corporations, the internationalised bourgeoisie began conspiring against Lula. In order to create a mass base for their anti-PT campaigns, they sought to win over sections of the Brazillian middle-class (i.e. small business people, doctors, lawyers, and other professionals). This class shared with the internationalised bourgeoisie a partial exclusion from power and often did not benefit from PT policies. Since the PT was forming alliances with some questionable business leaders, the internationalised bourgeoisie began spreading rumours that PT officials had become corrupt. The authors point out that the middle class is sensitive to corruption allegations because they “feel that its privileged status derives from individual merit rather than inherited privilege” (147). Instead of blaming capitalism for the contradictions of Brazillian society, they located the cause of all problems in corruption and PT policies. As they sought to open Brazil up to transnational corporations, they received assistance from the United States and other imperialist countries. The alliance between the internationalised bourgeoisie and the middle class was the material foundation for the movement that would later overthrow Dilma Roussef, imprison Lula, and would help Bolsonaro get elected.

In the later chapters of the book, Saad-Filho and Morais analyse the administration of Dilma Roussef, the Lava Jato corruption investigations, and their culmination in the collapse of the PT government. The book also contains a chapter with a systematic class analysis, which is helpful for understanding the class dynamics operative in the Brazillian social formation. The main lesson of Brazil: Neoliberalism Versus Democracy is that the PT’s class collaborationist approach is what got them elected, but is also what brought the party down. If the Left is to succeed in radically transforming society, it will have to transcend neoliberalism and pose an alternative to capitalism.

The book ends at the very end of 2017, a few months before Lula was imprisoned and a year before Bolsonaro got elected. Once the reader has studied the book, they will be well equipped to understand how a fascist could become Brazil’s president. Brazil: Neoliberalism Versus Democracy is the most sustained analysis of contemporary Brazillian society, and should serve as a foundational text for any study of Brazil.