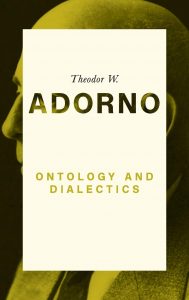 Chris Lay is a Lecturer in Philosophy at the University of Texas, El Paso. He works primarily on …

Ontology and Dialectics collects together twenty-three lectures given by critical theorist Theodor W. Adorno at the Frankfurt Institute for Social Research between November 1960 and February 1961. Taken together, the lectures form a single, cohesive project to challenge and ultimately dismantle Heideggerian ontology and the particular intellectual ‘cult’ that Adorno insists had surrounded it during the time when the lectures were delivered. Adorno’s criticisms of Heidegger are largely not directed at the man’s personal political activities – including, most infamously, his endorsement of Nazism and membership in the German Nazi party. Rather, Adorno seeks to demonstrate that Heidegger’s philosophical treatment of ‘Being’ and its place in his ontology reveal an impoverished and dangerous form of thinking that, by its structure alone, promotes heteronomy and submission to authoritarian powers. Beyond the strength of his arguments against Heidegger, these lectures are also important for the insight they provide into Adorno’s philosophical development. Key features of Adorno’s later thought – most notably, his notion of the ‘negative dialectic’ – emerge within and from these lectures.

The lectures of Ontology and Dialectics are aimed at an audience of students instead of a community of academics. Nonetheless, while these lectures are perhaps more accessible than some of his more formal writings, Adorno is still a notoriously challenging author to read. This difficulty is exacerbated by the other philosophers with whom Adorno engages and the larger philosophical conversation within which his arguments are situated. Thinkers like Hegel, Kierkegaard, Husserl and Adorno’s chief target here, Heidegger, are already tough enough to understand clearly even without having their arguments filtered through another philosopher whose own claims can sometimes appear opaque. At the same time, Adorno is careful to present the valuable context for the other philosophers he introduces and does so in such a way that familiarity with the ongoing historical dialogue of which he is a part is (mostly) not required. Even despite the limitations of accessibility, Ontology and Dialectics remains highly rewarding for both the reader interested specifically in Adorno’s anti-Heideggerian arguments and the reader who is more generally concerned with the ways in which socio-political institutions can constrain our ways of thought – and which then reproduces and perpetuates those same restrictive institutions in the world.

The lecture-based framework of the book is quite inviting. Each ten page lecture is brief enough that the reader can more comfortably interact with often formidable concepts without being overwhelmed by too many new ideas at once. Likewise, Adorno links the discrete topics of the individual lectures capably so that a common objective is always clear: exposing the contradictions of Heideggerian ontology and unravelling how these contradictions express unfreedom in thought and action. Given their sheer number, it would be impractical to attempt to give a systematic overview of Adorno’s unique focus for all twenty-three lectures. What follows will instead try to highlight some of the major themes woven throughout the lecture series.

As Adorno puts it, Heidegger’s notion of Being is something at once non-conceptual but also the root and essence of all particular beings. This distinction between the ‘ontological’ (Being itself) and the ‘ontic’ (the being of beings) – ontological difference – becomes an early point of emphasis for the lectures. In the first place, this represents a case of Heidegger putting the cart before the horse; Adorno thinks that there can be no Being without particular beings. It is worse than this, however. By grounding the being of beings entirely in Being, which is supposed to be ‘original’ and ontologically prior to individual beings, Heidegger eliminates subjectivity altogether. In order to explain the being of an individual subject, one must appeal to Being itself as a basis. But the being of the individual subject found in Being is, at best, a kind of conceptual subject that is removed entirely from the particularity of this or that concrete subject. Heidegger thereby turns the subjective into the objective – he folds ontological difference in on itself, making the ontic part of the ontological as a ‘mode of being’ and eliding the difference between the two that is intended to form a basis of Heideggerian ontology in the first place.

Adorno identifies two related problems with this ‘ontologization of the ontic’. On the one hand, this poses a debilitating contradiction for ontology. Being is portrayed as defying conceptualization or language and as opposed to individual beings. Yet, Being also must be a sort of concept for the being of beings – that from which individual beings partake of their conceptual being. Thus, Being is both concept and anti-concept. On the other hand, when we pair the anti-conceptual nature of Being with the ontologization of beings as part of Being, we get a mixture that is strongly anti-intellectual, too. As anti-concept, Being resists our ability to characterize it in thought. By ontologizing beings though, it also does away with what opposes it by absorbing the opposition into itself. We seem therefore unable to think critically about Being because we either cannot say anything about it or because that which is contrary to it just becomes part of it.

Coupled together, the contradiction of Being and the attempt to resolve contradictions by simply erasing them reflect the authoritarian character of Heideggerian ontology. Because Being is non-conceptual and so inarticulable, it simply asserts its priority over individual beings without justification – just as the dictator legitimizes his own authority by fiat. In subsuming the ontic into the ontological, Being silences contrary thought in precisely the way in which the autocrat suppresses resistance. The apparent turning of the subjective into the objective removes agency from the individual subject and cedes it to the objective; for Heidegger, individual beings are passive things acted upon by Being, an authority which is supremely active and from which any individual being gets its essence. This, too, mirrors heteronomous society, where individuals have no political agency and wherein they are politically defined in relation to the authoritarian regime.

Curiously, Adorno points out that Heidegger and his advocates frequently marginalize or outright ignore the historical and socio-political embeddedness of Being. Yet, Adorno says that Being and Heideggerian ontology as a whole are plainly the result of reflections on both a philosophical dialogue dating back to the pre-Socratics and on historical changes to dominant social institutions. We can trace Heidegger’s Being to Plato and Aristotle’s responses to pre-Socratic concepts of evidently arbitrary first principles, like Thales’ contention that water is the fundamental element of reality. Similarly, Heidegger’s own ontology is best understood philosophically as an outcome of post-Hegelian thought – as a development out of Kierkegaardian existentialism and a direct reaction to the prominence gained by scientism in the early twentieth century. For these reasons, it is hardly as ‘radical’ as Heidegger supposes it to be.

The political historical context is equally instructive in explaining Heideggerian ontology. Adorno believes that the sense of authority given to Being is indicative of an attempt to preserve hierarchical political structures that were weakened (or had collapsed altogether) in the early 1900s. This is especially clear in Heidegger’s native Germany, whose own monarchy had dissolved into a beleaguered democracy after the First World War. Being does not merely represent a regressive political move to something so recent, though; in fact, Heidegger’s treatment of Being is better called archaic. Adorno compares Being’s place as the inarticulable Absolute to the social role played by ancient myth. In particular, he means the way that fate permeates myth as a force that compels obedience from a subject that lacks autonomy, at least to the extent that she cannot change fate and must submit to it. As something that escapes rational conceptualization and which Heidegger describes as having the irresistible force of history, Being-as-fate thereby represents a return to mythologization.

Despite this, Heidegger and his followers claim that their ontology is, for the most part, politically indifferent. But it is precisely this indifference that lays the conditions for political transgressions like fascism. There are parallels here with how Heidegger confronts ontological difference. Just as Being affirms that it is distinct from individual beings but must also bring those beings into itself, ontology is supposedly separate from political concerns but ends up revealing its political character either in the pre-conditions that make ontology possible or in the fact that its indifference permits tremendous political consequences. Adorno’s point seems to rightly be that, even if we take Heidegger at his word that his ontology is inherently apolitical (at least in intention), the form of the Heideggerian system – and the sort of restrictive thought processes it promotes – are born of existing political structures and can have very real socio-political effects on the world. At the very least, a system of thought that abstractly encourages the surrendering of autonomy and prioritizes the reality of external authority primes individuals to do exactly that in their political lives.

In terms of demonstrating the intellectual and political dangers inherent to this type of limited thinking, Ontology and Dialectics is exceedingly successful. There remains the question of just how fairly Adorno treats Heidegger’s position, however. Heideggerians will counter that Adorno has drastically misinterpreted Heidegger, most probably by mischaracterizing Being and attempting to ascribe features to something which is, by its nature, uncharacterizable. Indeed, Adorno anticipates such a reply early in the lectures. And it should be pointed out that Adorno is not hostile to Heidegger at every turn. For instance, in his discussion of ‘ontological need’ – the reasons why people seek ontological explanations – Adorno states that Heideggerian philosophy does something quite valuable. The movement of philosophy towards verificationism and scientism led to a stale philosophical culture that was unconcerned with what had traditionally been questions of ‘what matters’. Insofar as ontology mediates scientism, its worth is in revealing the ‘untruth’ or problems with that dominant philosophical approach. Adorno’s recognition of positive features within ontology, then, sees Heideggerian ontology as part of an ongoing history of reflective consciousness.

Despite the compelling nature of his arguments, it is doubtful that Ontology and Dialectics would sway any Heideggerians who are already likely suspicious of Adorno’s project. For the rest of us, though, Adorno’s wider remarks about heteronomous thinking and the inimical socio-political effects this can have are of vital importance. This is all the truer when aspects of our society like popular culture, technology and the workforce are often talked about as if they, too, are independent of politics and political consequences. We must recognize that if this kind of thought is not oppressive in and of itself, it is at least thought that invites oppression.