Marx & Philosophy Review of BooksReviews‘Behemoth: A History of the Factory and the Making of the Modern World’ by Joshua B Freeman reviewed by F Ross O’Leary 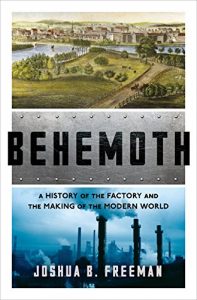 Joshua B Freeman
Behemoth: A History of the Factory and the Making of the Modern World

Behemoth: A History of the Factory and the Making of the Modern World is an ambitious work from Joshua Freeman, a historian at Queens College and CUNY in New York City. In some ways, it is a change of pace for Freeman, whose focus has expanded from the history of the working class in New York to the working class in the United States to the present text. Billed as a global history of factories, Behemoth traces the giant factory as a harbinger of modernity and progress from the early modern English textile mills to the contemporary mega-complexes of China and Vietnam via the United States and the industrialisation projects of the Soviet Union and the post-war Warsaw Pact satellites.

This book will be approached, at least from the title, sceptically. A truly global history of the factory is one that is, by its very nature, analytically and descriptively beyond what any single volume could achieve. Freeman is quick to narrow the focus of his research: it is to the large and outsized factories, considered revolutionary and marvels of progress and modernity, that he has turned his attention. This serves the narrative well as he demonstrates the recurring patterns of awe and pride from the bosses and outside observers that often took the form of evocative architecture and culture, the moments of apparent equilibrium between capitalist extraction and concern for the lot of the factory labourers, before the reality of contest and conflict returns to the surface and the front of progress moves to new lands wherein the cycle begins again. Taken individually, each chapter’s vignette from the history of industrialisation is not particularly revelatory, but by tracing a thread through what is often separated by geographic or chronological focus, the factory itself re-enters focus as an object of historical inquiry.

This might seem like a trifling point. We live, as Freeman begins, in a factory-made world (i). But a history of factories – placing them within their historical context and demonstrating their shifting nature – serves an important political point as well. As Freeman notes, debate in much of the global North is wrapped up in the nostalgia of factories, with myriad ills blamed on the disappearance of manufacturing jobs from these communities. Our own personal experiences reflect this: the physical space of the factory continues for many of us – especially in urban spaces – as spectral architecture, the lifeblood of working life that once gave them their sense of purpose long since disappeared. A generation of workers in the global North that have known only service industry-intensive economies, and I include myself in this, experience factories as repurposed community centres, workspaces, or luxury apartments. Thus East London’s Bryant and May Factory, site of the 1888 match women’s Strike, has been transmuted via gentrification into the gated luxury community of ‘Bow Quarter’.  This is why Behemoth, while offering thinner gruel for an experienced labour or economic historian, stands as a good entry point for undergraduates and non-experts to start thinking about factories – not as their caricatures or fossilised remains, but as living, breathing, and above all changing in their nature.

The book is divided into seven chapters, each taking in a particular time and place that is representative of the forward advancement of the factory system. The first chapter focuses on the cotton mills of the north of England of the late 18th and early 19th centuries – a natural enough starting point for the discussion not only of the modern factory system, but also the modern world. The second chapter moves, with the technological secrets of the factory, across the Atlantic to New England and the textile mills of the early 19th century. The story rests here in the United States in the third and fourth chapters: the third chapter explores the great steelworks of Pennsylvania and Ohio from their heights in the latter half of the 19th century up to the First World War. After the First World War, the steelworks ceded their position at the edge of innovation to the assembly lines of Detroit and River Rouge, covered in the fourth chapter.

The fifth chapter contains an intriguing detour into the Soviet Union under the first Five Year Plan. Freeman takes the path of decentring the political economy of the Soviet Union – as much as he did that of the United States. All that Freeman concedes on the matter is that whether the Soviet Union was ‘a socialist society, a state capitalist one, or something else entirely was a subject of fierce debate in the 1940s and 1950s and is still a matter of controversy in the much-shrunken universe of people who care about such things’ (224) – the truth, alas, can hurt. Instead, Freeman has focused on the continuity between the grand factories of the United States and the Soviet Union: sharing organisational philosophies, templates, and even architects. Albert Kahn, ‘the architect of Detroit’, was part of a wave of American architects that were contracted to industrialise the Soviet Union during the first Five Year Plan; even the arch-capitalist Henry Ford offered up, as Freeman recounts, that ‘anything we have is theirs’ (190). The sixth chapter demonstrates the ways that Freeman’s thesis – that factories are of modernity, rather than particular political economies – can offer comparisons, looking at the post-Second World War factories of the United States, smaller and more dispersed than the Detroit and River Rouge plants, alongside the new works in the Warsaw Pact nations – especially Nowa Huta steelworks in Poland. The seventh chapter brings this up to the present day, with the developments of massive complexes in coastal China and, to a lesser extent Vietnam.

This final substantive chapter is important but, in a way, it is an infuriating break from the previous chapters. Each previous iteration of the factory was accompanied by a utopian vision of what it could provide – the onward march of progress. For present-day factories, Freeman argues, there is no such utopianism. The separation of production from the merchant (for example, Apple products are not made in an Apple factory) has alienated the factory from the visions of progress and modernity – if it could ever be said to be more than an idea.

As a work of such breadth, Behemoth, is ripe for critical appraisal – and no doubt, it will be the subject of debate. These can be grouped under two broad categories. Firstly, and perhaps most importantly for this review, is that it at time strays towards a liberal progressive reading of history. In describing the trajectory of each epoch – most prominently in the first few chapters – a common path is followed: the pride in the innovation of the factory system that comes before the fall when the realities of class struggle reasserts its primacy. This format takes some getting used to for those more familiar with labour or social history. The voices of the workers and their lived experiences can seem few and far between when discussing visions of progress – being statistics and averages – while great men such as Albert Kahn leap out of the pages. This makes for a strange discovery if one was drawn to the book by its endorsements: Eric Foner, Sven Beckert, Kim Phillips-Fein and Nelson Lichtenstein. One senses that a work such as this – which offers such a broad overview – is necessary grounding for new generations for which the importance of factories are not a self-evident.

Likewise, separating factories from the political economy in which they arise – Freeman argues that ‘rather than a feature of capitalism’, giant factories are ‘a feature of modernity in all its variations’ (319) – means that much of the book reads descriptively without depth of critical analysis: in the conclusion, the argument is made that giant factories have a ‘natural life cycle’ based in part on primitive accumulation and the exploitation of workers previously outside the waged labour market (315). This is a strong argument hinted at in the introduction (xv), and having this returned to more emphatically would strengthen the intellectual framework for this piece – and avoid some of the asides that make little contribution to this point. For example, the voyage into the German automotive industry runs against the grain of the overall thesis (265-267).

The second grouping of criticisms will centre on the absences. Anyone interested in a particular time or place is going to have something to say about what has been written or left out. That is natural for a work that is, in large part, synthesising the work of others, and invites readers to independently read on. As a personal example, after reading this book I found myself wishing to return to Stayin’ Alive: The 1970s and the Last Days of the Working Class (Cowie, 2010) as a capstone for the chapter on Cold War production.

There are absences, though, that are more significant to the overall sweep of Freeman’s argument. The first is that of Japanese industrialisation. If the giant factory heralds modernity and progress, then the story of Japan’s rapid industrialisation and modernisation in the late 19th and early 20th century and the successes of Japanese industry after the Second World War is surely a missing piece of this story. Related to this would be the inclusion of more diverse post-colonial visions of modernity, and how the factory fit into these visions. The workers of Mahalla, in Egypt, receive a brief mention (268-269). Yet the importance of the concept of progress and modernisation for the global South during the period of decolonisation – arguably up to the modern-day – is hard to understate. The role of industry and factories in these dreams of progress means that there seems to be an unwritten chapter for what aims to be a global history: the successes that weren’t quite successful, and the failures to rise to the forefront of the modern imaginary.

Regardless of these absences, one can foresee this work making its way onto the syllabus of undergraduate courses and sparking further interest in the nature of progress and modernity, and the ways in which our lives are shaped and re-shaped by the factory – even as the factories themselves shift and change.