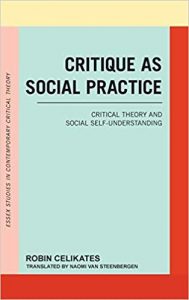 Jake Parkins currently works as a Library Assistant at Newcastle University Library. His area of …

In Critique as Social Practice: Critical Theory and Social Self Understanding, Robin Celikates engages with a ‘fundamental’ methodological question that can be summarised as follows: how should social/critical theorists conceive of their relationship with their addressees and what is the role of the ‘reflexive capacities’ of addressees and ‘social practices of critique’ (13-15)? This question is of vital importance to Critical Theory since its ambition can be summarised by Karl Marx’s claim that theory should contribute to the ‘self-clarification (critical philosophy) of the struggles and wishes of the age’. An emancipatory theory, then, supports certain contemporary oppressed groups by enabling them to clarify the nature of their own struggles and domination. Celikates convincingly argues that if theorists misconceive the theorist-addressee relationship, not only do they inadequately understand ‘the practical character of theory’, but they might inadvertently undermine the very emancipation they intend or proclaim to support; thus, for Celikates, social criticism should be understood as a form of social practice. It is one of the achievements of Celikates to recognise the centrality of this issue and to deal with it in a systematic fashion.

Celikates’ thesis is that for Critical Theory to achieve its emancipatory aim, it must avoid two problematic methodologies: external and internal critique. Two questions help differentiate these two forms of social criticism: a) from which ‘standpoint’ is social criticism ‘formulated’; and b) what is the role of theory for social criticism (118)? Celikates’ book is divided into three parts – following a clear, dialectical structure. In Part I, Celikates argues that the external critique model – which originates in Emile Durkheim’s approach and continues through Bourdieu’s critical social science – involves the social critic being independent of the self-understanding of ordinary members of society, that is, common sense or given social practices. Since the critic is conceived of as being external to the social context, there is an epistemic break between theorists and members of society. The former regard their theory as scientific and/or objective and therefore separate from, and superior to, the understanding of the latter of their social practices. The role of external theory, then, is to investigate the laws that operate behind the backs of members of society; it focuses on social reality – that is, the ‘functional laws of social and historical processes’ –, how deficient social reality is and how members of society cannot recognise this from within their social context (44, 188-119). After reconstructing Durkheim’s objectivist approach, Celikates argues that this break continues in Bourdieu’s approach, despite Bourdieu’s best attempts at avoiding an overtly objectivist approach by trying to take addressees’ perspectives into account. Celikates then criticises Bourdieu’s approach for underestimating the critical capacities of ordinary agents and overestimating the ‘objectivity’ of critical social science, resulting in a range of normative, political-strategic and methodological problems as well as a ‘one-sided view of social reality’ (59).

In Part II, Celikates then discusses the ‘internal’ critique model, which he associates with Harold Garfinkel’s ethnomethodology and Luc Boltanski’s sociology of critique.  Following a critical reconstruction of Garfinkel’s ethnomethodology, Celikates shows how Boltanski develops ethnomethodology’s key insights, most notably that theorists should aim for their critique to be ‘anchored within the self-understanding of the criticised individual or collective’(104-105, 118). Critique, thus understood, cannot be external to how addressees see their social context from within.  This move establishes, in contrast to Bourdieu, a ‘methodological egalitarianism’ between the theorist and addressee: in principle, there is no epistemic break between the theorist and addressee, nor a ‘structural difference’ between their perspectives, nor between theory and practice, nor between ‘science and common sense’ (120-121). Instead, agents ‘possess judgement and other reflexive capacities’ and are capable of criticising ‘their deficient practice’, presenting their own theories, and if some or most members of society are unable to criticise then another member of society will utilise ‘the implications of their self-understanding’ (94-95, 119) as a recourse of critique. The role of critique, then, is to ‘follow’ agents – that is, to ‘learn’, describe, ‘emphasize’ and clarify the social practices of agents, instead of ‘explaining and “knowing better”’ (70-71, 97, 120-121). What differentiates Garfinkel’s and Boltanski’s approaches is that the latter pays particular attention to how agents justify their social criticisms by ‘drawing on general principles that are expressed in socially and culturally mediated forms of argumentation’ (94-95).

At the end of Part II and at the start of Part III, Celikates discusses limitations of Garfinkel’s and Boltanski’s accounts, most notably their inability to adequately reflect on ‘the social conditions of the development and exercise of the social practices of critique’ which agents engage in (124). If, as even Boltanski notes, there is unequal distribution of ‘communicative competences and the ability to make oneself heard’ and ‘opportunities to access the practices of justification and critique differ’, and if the opportunity of being heard ‘in society’ is ‘socially conditioned’, then theorists must consider ‘which social conditions’ are necessary for the development and exercise of agents’ reflexive capacities (123-124). Celikates conceives social conditions that hinder the development and exercise of agents’ capacity to reflect, justify and critique as second-order social pathologies: situations whereby citizens are structurally inhibited from recognising problematic situations as problematic, or, if they do, ‘they do not understand and thus criticise them’ (124). This ideology operates at ‘a second level’ insofar as it ‘prevents or complicates’ – but never eliminates – ‘reflection on and critique of’ ways of thinking, acting, and ‘social contexts at the first level’ (124).

Having outlined deficits of both external and internal critique, Celikates outlines his own reconstructive model critique and presents it as overcoming the previously highlighted deficits. His model attempts to refrain from betraying ‘the basic intuition of ‘methodological egalitarianism’’ while remaining critical of the (social) conditions of critique (123-124).  Reconstructive critique has four features: 1) it is constructive insofar as it goes beyond description of norms and practices of a social context; 2) it is ‘normativist’ insofar as it enables the reflexive capacity of agents without ‘presupposing a full-fledged theory of the right or the good’; 3) it is ‘dialogical’ in that  it ‘relates to the self-understanding of agents’ without dismissing nor wholly accepting their perspective; 4) it is ‘critical’ as it is in ‘tension’ with how agents understand themselves in situations of ‘second-order pathologies’ since the theorists aim is to transform agents self-understanding’ and to eliminate the given social ‘pathologies’ (ibid, 137-138) that stint agents’ ability to develop and exercise their critical capacities. In developing this model Celikates draws on the early Habermas’ notion reconstructive critique that was methodologically inspired by Freudian psychoanalysis. Similar to the analyst-analysand therapeutic relationship, Celikates’ reconstructive criticism involves theorists enabling the strengthening of their addressees critical capacities – that is, their second-order reflexive capacities –, encouraging the transformation of their self-understanding and practices, whilst simultaneously viewing their addressees as active and equal participants who are always somewhat capable of self-reflection, even if these capacities need to be further developed (124, 145-153). Unlike external critique, reconstructive critique thus rejects ‘necessary false consciousness’ and totalising narratives; instead, the addressee is always capable of reflecting and resisting domination. More concretely, the reconstructive theorist enables self-reflection by identifying and producing ‘reflective unacceptability’ by providing hypotheses substantiated by ‘empirical and sociological evidence’, i.e. via social psychology (133-134, 141, 158, 172, 175-180). In other words, the theorist induces a form of cognitive dissonance by getting agents to reflect on whether they have reasons to revise their self-understanding in the light of the analysis of the social conditions provided by the theorist. Again, like the analyst-analysand relationship, whether the theorists’ hypotheses are valid, the account of the social conditions convincing and emancipation successful is dependent on whether addressees’ accept or reject theorists’ reconstructions; albeit, the addressees’ response isn’t a ‘definitive’ criteria especially under capacity-hindering social conditions (which addressees are, in principle, capable of recognising and confronting).

In short, Celikates’ important contribution lies in outlining a methodological egalitarianism that overcomes the external-internal dichotomy and the limits of each approach. However, his own reconstructive critique is not without flaws. For one, it seems unnecessarily narrow in at least three respects. Firstly, it is not clear why Celikates limits himself to ‘empirical and sociological evidence’ – e.g. social psychology – as tools available to the critical theorists to induce reflective unacceptability (ibid, 175-180). There are other tools such as discourse analysis or genealogical studies that are utilised by other critical theorists, such as James Tully – which can enable agents to gain more critical distance from their social conditions (175-180).

Secondly, Celikates’ conception of the theorist-addressee dialogue is unnecessarily narrow. In his solution, Celikates tends to frame the theorist-addressee dialogue in terms of the theorist providing a hypothesis which the addressee is invited to verify, instead of the theorist and addressee jointly elaborating an account of the conditions of domination. Similarly, in his review of Celikates’ book, Neal Harris stresses that within Celikates’ framework it is ‘always’ the theorist who ‘determines the presence of reflexive pathologies’ and ‘determines which pathologies are worthy of investigating’; after all, theorists – as academics – are more likely to have the conceptual resources to develop second-order reflexivity unlike non-academic members of oppressed groups (126).

However, I would not agree that Celikates’s apporach ‘fails’ (ibid, 126) because of this residual asymmetry. Firstly, Celikates never claims that the process of reconstruction is completely symmetrical: ‘Obviously, this cannot mean that the situation is perfectly symmetrical’ since both Critical Theory and psychoanalysis begin by diagnosing a ‘structural reflexivity deficit’ (149). Secondly, unlike external critique, reconstructive critique always assumes that agents, in principle, have at least some reflexive capacity and, ultimately, that theorists’ hypotheses cannot be validated without the agreement of the addressee. Nevertheless, Celikates could go further and formulate a more dialogical (and hence equal) conception of the theorist-addressee relationship by going beyond a model that more involves mere verification.

Thirdly, Celikates narrowly focuses on the social conditions that hinder the development/exercise of critical capacities but hardly on the difficulties of changing those problematic social conditions. In short, Celikates focuses more on transformation (qua critical reflection) of agents’ self-understanding and less on the difficulties of transforming concrete social change when both are essential for emancipation.

Overall, Celikates’ work is an important contribution to the question of how critical theorists, given their emancipatory aims, should address the oppressed, despite being unduly narrow in certain respects.