Marx & Philosophy Review of BooksReviews‘A Spirit of Trust: A Reading of Hegel’s Phenomenology’ by Robert Brandom reviewed by Matthew McKeever 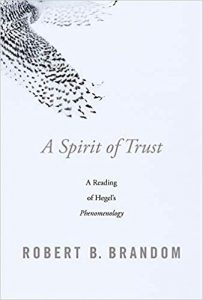 Robert Brandom
A Spirit of Trust: A Reading of Hegel’s Phenomenology

Matthew McKeever is executive associate editor of the philosophy journal Inquiry, author of the …

Hegel has been neglected among analytic philosophers, a movement that can be said, without too much inaccuracy, to have been born making fun of neo-Hegelians like John McTaggart. The aim of Robert Brandom’s massive A Spirit Of Trust is to remedy this. It is a detailed reading of many parts of Hegel’s Phenomenology of Spirit, spanning, as does Hegel’s book, metaphysics, epistemology, the philosophy of language, and ethics. Its aim is to translate Hegel into terms that an analytic philosopher will understand, to determine—to echo Croce—what is living in Hegel for the analytic philosopher of today.

My aim here is to introduce some historical background, before considering a couple of the big picture views that emerge from the book. I’ll end by suggesting what readers of this journal can learn from the often abstruse and technical discussion. There is much of interest I have had to omit; if the themes and style introduced below appeal, you will gain much from going to the source.

Philosophers draw a distinction between theoretical and practical philosophy, where the former is concerned with questions in epistemology, metaphysics, and related areas, and the latter with morality, politics, and other social phenomena.

To begin, a bit of history. Philosophers have always been concerned about the relation between mind and world, and in the early modern period the following picture coalesced. (It has at best slowly uncoalesced in the intervening centuries).

This picture has its problems and figuring out answers to those problems has been a perennial concern for philosophers. Here’s one: I said that thoughts represent the world out there. But how could I ever know that? We want to say that it would be by comparing the thought with the world, as we’d compare a photo with the thing it depicts. But we can’t do that: all we’d be doing is comparing a thought of a photo with a thought of the person it depicts. If everything we do is mediated by thoughts or representations, we can never get beyond them to the reality they’re meant to represent. Different thinkers had different views on this: Berkeley accepted the problem and boldly did without the external world, suggesting that there were only thoughts. Kant sort of merged mind and world: what we call cats are the co-production of stuff out there and our mind.

Here’s a way to think of it. For Descartes and Locke, reality is bipolar: there are minds on the one hand, and the world on the other. For Berkeley, it is unipolar: there are just minds (with God coordinating the thoughts these minds entertain). Kant has a sort of synthesis: the two poles merge together. Hegel has yet another view: for him reality is bipolar, but instead of there being mind on the one hand and world on the other hand, he thinks that there is mind on one hand and mind on the other. Where Descartes and Locke posit an external world of matter, he posits more mind. In a sense, the world is composed of thoughts, the stuff of minds. Let me turn to Brandom to introduce the way he understands Hegel’s understanding of it.

For Brandom, Hegel’s idea about the relation between mind and world is best grasped as a ‘bimodal hylomorphic conceptual realism’ (see, for example, 669-673; here as elsewhere, the best introduction to the core ideas is to be found in the lengthy conclusion). On the traditional problematic, there were two different things, thought and the world. Hegel’s key idea is that there is just one thing understandable in two ways (hence ‘bimodal’; hence also, seemingly, ‘hylomorphic’; Brandom seldom uses one word where two will do, or one syllable when four or five sound better).

Let me just quote the sort of thing he says, both to help explain his picture, but also so you get a sense of the prose style:

Now, jargon aside, there is an interesting and novel, if perhaps ultimately implausible, picture of mind and world going here. What he’s basically saying is this: the world exhibits relations of necessity and possibility: If a ball is red, it can’t be (it necessarily isn’t) blue, but it can be round. Somehow its redness repels its being blue with this deep metaphysical force. These forces are the alethic modal relations mentioned above.

But we humans are subject to our own necessity-like constraints. If I believe that it is red, then I shouldn’t also believe that it’s blue. I’ve done something wrong if I do. If necessity reigns in the physical world, something kind of similar reigns in the human world. I ought not do certain things (I must not); I am permitted (can) do certain others. These oughts and cans are the deontic normative relations mentioned above.

Brandom’s Hegel’s big and genuinely novel idea is that these two species of weird relations are two sides of the same coin. The world manifests itself in itself in terms of alethic modal relations: if the ball is red, it can’t be blue, and in us in terms of deontic ones: if I believe it’s red, I shouldn’t believe it’s blue. The logic of the world reflects and is reflected by the logic of human responsibilities, and these responsibilities are crucially things which one ought or ought not do.

That’s at best the barest sketch, and while Brandom has much more to say, I’m not sure that this picture, intriguing though it is, will win many converts (one problem is that, famously, alethic and deontic logic are different—have different rules. What is called the T rule holds in the former—if it’s necessary that 2+2=4, then 2+2=4—but not in the latter (sadly, from the fact that nobody should murder it doesn’t follow that nobody murders). This seems to undermine the idea that the two sorts of relations are at bottom one).

The crucial thing to realize is that to get ourselves to adequately track the world requires that we do things. It’s not a question of us having representations with special powers to reach out and touch the world. Rather, we come to represent the world better and better as we add and subtract commitments—come to acquire and give up on epistemic responsibilities—to claims. Representing is doing. This, a central part of Brandom’s philosophy project, is intriguing and enjoyable to think about, and one interested in this view will benefit from engaging with it as Brandom sees it manifest in Hegel’s philosophy.

Let’s now turn to practical philosophy. We are subject to norms: I shouldn’t kill people and should eat my vegetables. On Hegel’s picture, in the transition to the modern period there was a sea change in how we thought about being subject to norms. On his (wildly!) broad brushstrokes history, in the premodern period we thought norms were out there in the world, as, perhaps, the will of God. But by the Enlightenment, that picture had changed. Kant famously said that to be enlightened is to make one’s own decisions for oneself. Enlightenment thinkers placed the human being at the moral centre of the world, as the source of norms. If we should do something, it’s because we‘ve decreed that we do so. We make our own norms.

But there’s a problem, Brandom’s Hegel thinks. Although we’ve made progress realizing that we, and not some god, are the source of the norms that bind us, self-given norms seem weak. It’s too easy not to abide by them: that’s why we have police and priests.

Brandom’s Hegel’s idea, which comes out in part of the famous discussion of the master slave dialectic, is that norms are social things. Norms aren’t features of the objective world; but nor are they subjective, things we impose on ourselves. Rather, they are intersubjective: the product of a group of at least two people taking and attributing responsibility. Once we realize this, Brandom thinks, we will move from the modern era of weak normativity to the postmodern era of trust, a world in which treating others in a certain way, as subject to and giving norms, is a condition for living under rules.

And now we can get to the final, very surprising view. We said above that understanding the world is a question of doing something: of getting one’s commitments in order, of believing what one ought and not believing what one oughtn’t. But now we learn that doing what one ought to do is fundamentally a question of bearing the right sort of relations to our fellow humans. It follows that the central technical question in theoretical philosophy—how we think about the world—is found in the answer to the central ethical question—how we treat each other. This is a fascinating and bold theory deserving of, at least, our aesthetic admiration.

Let me end by considering what readers of this journal, thinkers of a Marxist or more generally leftist orientation, can take from the book. In a sense, the pickings are slim. Marx scholars might get some value in seeing how to translate some of Marx’s more Hegelian moments into this new idiom (the knotty metaphysics of commodities with which Capital begins seems particularly apt for consideration in terms of Brandom’s socio-metaphysics), but it’s fundamentally not a work of political philosophy.

That doesn’t mean it has no value. The main value, fittingly for such an ambitious book, is at the big picture. The worldview we have inherited is individualistic, from Descartes sitting in his room alone solving the problems of philosophy, to the self-determination of the Enlightenment self-legislator and the Smithian capitalist, all the way up to the hyper-individualism reflected both in popular and theoretical thinking from Rand to Nozick to the society-less vision of Thatcher and those who followed her.

Hegel, on Brandom’s reading, pushes back against this, and one lesson we can take from this book is that this individualist inheritance is, in a sense, negotiable, that there are more social ways of understanding ourselves, even at the most abstract philosophical level, ways that are more amenable as the ideological underpinnings of a society in which we might want to live together. Brandom advertises his project in numerous places as technical philosophy ‘with an edifying intent’; that intent, I think, successfully shines through this big and often demanding book.