Marx & Philosophy Review of BooksReviews‘The Socialist Manifesto: The Case for Radical Politics in an Era of Extreme Inequality’ by Bhaskar Sunkara reviewed by Paul Elias 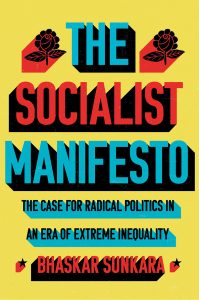 Bhaskar Sunkara
The Socialist Manifesto: The Case for Radical Politics in an Era of Extreme Inequality

A new generation is taking the political stage, poised to influence the scene for years to come. It is a generation that was born in the era when social democracy began to die, who came of age politically when the left was defeated and working class movements were in retreat, shaped further by social turmoil in the fallout of the 2008 Great Recession. This new breed of political animal is the millennial socialist. Such prominent political currents inevitably find their expression in the work of popular theorists. Bhaskar Sunkara’s Socialist Manifesto: The Case for Radical Politics in an Era of Extreme Inequality has emerged as an initial manifestation of this collective voice.

But while Sunkara is both a millennial and a socialist, born the year the Berlin Wall fell (the same year as Alexandria Ocasio-Cortez), he does not narrowly target his message to American adults under thirty, the majority of which already have an unfavourable view of capitalism. He is concerned with the inaccessibility of the academic left and in the first chapter narrates an experience of capitalist exploitation in an attempt to straightforwardly communicate its Marxist conceptualization. In this respect, however, the book is only a starting point. The detailed analysis of crucial periods in the history of socialist politics, to which most of the book is dedicated, is more likely to appeal to college educated leftist intellectuals and academics rather than ordinary working class people.

One of Sunkara’s main aims is to show how the ‘lessons and analysis that socialists offer—along with the Marxist framework—are vital for plotting a way out of today’s extreme inequality and into a just society’ (236). The common ancestor of all the variations of socialist politics explored – including his own – is the scientific socialism of ‘the mysterious Karl Marx’ (2). Predictably, the demystified Marx presented by Sunkara is draped as a democratic socialist for whom ‘socialism essentially meant radical democracy,’ with evidence to support this interpretive claim (47). This emphasis on Marx’s affinity to democratic political practice provides an opportunity to bring attention to a relatively underemphasized topic in Sunkara’s book and contemporary socialist theory in general: the subjective dimension of social and political life.

For this purpose it is revealing that Sunkara claims that capitalism ‘was an accident’ of history and not a necessary result of human nature (35). Marx, of course, did not think that humanity finds its fulfillment in the capitalist mode of production. However, he claimed to see an internally related historical process of human development comprised of necessary phases which are expressed in the fluctuating nature of social relations, modes of production, political organization, etc. Capitalism is a moment in this process. Portraying history devoid of the movement of humanity’s development is indicative of a deeper philosophical problem with the theorization of the relationship between life-practice and subjectivity. This problem manifests in various ways throughout Sunkara’s book. Consider, for instance, his ‘banal’ solution to the ‘risk’ of ‘creating a new caste of oppressors’ in a post-capitalist society – i.e. to authoritarianism – which amounts to a mere restatement of the need for ‘ordinary people’ to ‘actually have democratic avenues to make choices and hold their leaders accountable’ (153). On Marx’s premises the realization of Sunkara’s vision of extending democracy ‘to the social and economic realms’ depends primarily on the widespread development of the capacities required for democratic political practice (26). Marx’s analysis of social conditions (e.g. in Russia in the 1880s) indicated to him that some conditions are not conducive to the development of a democratic character in the general population and instead create individuals who are predisposed to authoritarian politics.

More significantly, this underlying problem with the theorization of the relationship between life-practice and subjectivity is expressed when Sunkara describes the role of a ‘subjective factor’ in the ‘triumph of Marxism (or socialism more broadly)’ in European political parties (56). He claims that ‘socialists’ were responsible for the creation of a ‘shared working-class identity and a politics to match it’ (56). However, to paraphrase Marx, the educator must also be educated and so it is not clear how those ‘socialist’ individuals developed the character required for socialist politics independently of an external ‘subjective factor’, which would also be necessary for ‘ordinary people’ to become socialists.

The depth of this issue is best examined once Sunkara’s claims are situated in contemporary circumstances. From Sunkara’s perspective we live in a time when an opening has been created for the emergence of socialism into the mainstream of the US. In the decade since the global recession of 2008 there have been glimpses of rising political consciousness and the stirrings of radical movements, including an upsurge in the struggle for civil rights by the Movement for Black Lives. There was the Wisconsin uprising in 2011 and then, in the same year, the Occupy Wall Street movement emerged. Although it was ultimately a disorganized failure, the prevailing mood of people caught up in that movement was characterized by the nebulous hope that the idea of challenging capitalism on a radically progressive basis had reached a mass audience and would reshape the world. Now, three years into Trump’s presidency, there is even less hope yet more of a will to get organized.

‘What we need now,’ Sunkara maintains, ‘are organizations: working-class parties and unions that can unite scattered resistance into a socialist movement’ (216). He draws criticism from some commentators for thinking that ‘the road to socialism beyond capitalism goes through the struggle for reforms and social democracy,’ especially because he points to the Democratic Party as a kind of beater vehicle to drive down this road (30). Sunkara sees the Democratic Party as an opportunity to build the strength of socialist forces until a time when the creation of an independent workers’ party is viable. He thinks that if a social democratic administration with a penchant for class struggle can curtail the power of the market and enact reforms which improve the lives of working people, it will strengthen the working class and socialists will be better positioned to influence movements that can challenge capital’s structural dominance.

For Sunkara, developing ‘a clear vision of socialism’ is an indispensable part of this process, and a central purpose of this book is to offer what he believes is a realistic vision (29). Wanting to avoid simply railing against capitalism, Sunkara brings attention to a similarity between his own approach in the first chapter – where he presents a society ‘that only lives in our imagination’ – with that of the ‘utopian socialists’ in Marx’s time (29). From the perspective of Marx’s scientific socialism, such theory emerges when the working class movement is young or weak – when the reality of what is becomes shrouded in fantastic dreams of what should be. This is consistent with the fact that the ‘populist right still appears better suited than the socialist left to speak to the inequality, anger, and resentment that neoliberal policies inevitably produce,’ and that elements of democratic socialist ideology still remain a tough sell in the United States (213). It is also consistent with evidence drawn from contemporary social phenomena which indicates that a substantial portion of the population is significantly influenced by irrationality in their political life. Socialists are struggling to come to terms with this.

Political irrationality is not emphasized in Sunkara’s book because he thinks working people are rational enough to be channeled towards socialist politics by those who are able to convince them that class struggle is a necessary approach to a better life. To his credit, Sunkara has repudiated the tendency to approach political organizing as a mere attempt to impart consciousness to the masses. Instead, he has emphasized the creation of infrastructures of dissent so that there are avenues for class consciousness to grow through collective struggle. But the tendency toward vanguard politics is a hard one to shake in contemporary America for similar reasons that utopianism is. Attempting to figure out ‘how to take anger at the unjust outcomes of capitalism and turn it into a challenge to the system itself,’ as Sunkara proposes, is an approach that is analogous to the tactics of the populist right (recall that Steve Bannon refers to himself as a Leninist) (215). He is obviously charting a different ideological terrain than the right, but with this approach he diverges in principle from Marx’s scientific socialism. In Marx’s theory, working people in capitalist society become revolutionary – they develop capacities, sentiments, ideas, etc., that are necessary for revolutionary practice – as a result of their fundamental life-activity. But even though Marx did not view their historical role (as revolutionary subjects) as a mere ‘accident,’ he did not thereby see it simply as an inevitable result of history.

Throughout his life, Marx returned to the issue of how certain social and economic conditions give rise to forms of political subjectivity that form the basis of reactionary politics and further disrupt the processes which are supposed to shape the working class into revolutionaries. Even though Marx did not deeply analyze this issue, socialists who are inspired by his work would benefit from returning to his reflections – and the problems he left unpursued – regarding the relationship between subjectivity and life-practice as it pertains to regressive politics.