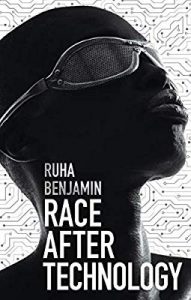 The twenty-first century has ushered into full swing an age of new, and often deeply concerning, digital technologies. Many critical theorists, writing in the more left-leaning tradition, have begun to map exactly the troubles that we are causing each other through technology. It is just such a mapping of a technological problematic that Ruha Benjamin proposes and artfully executes in her recent work, Race After Technology. The book, impactfully written, well researched and refreshingly clear in an era of academic puffery, is well worth the time of scholars, students and citizens looking to better understand our relationship with technology. The following review will at first briefly summarize some of the main arguments of the book. Following a few small criticisms, the work is then situated within a broader philosophical discourse and, finally, the case is made for Race After Technology to be read with the utmost urgency as we launch ourselves headlong into the digital age.

A sociologist by training, Benjamin draws from a wide literature in Race After Technology. From journalistic accounts to philosophical treatises, statistical studies to personal stories, the author makes her overall case clear: digital technologies have, are and likely will be used by people to (re)create hierarchies of race within our society. This, as she notes in the introduction, is nothing new. One needs but to quickly look at the products of the culture industry from the early twentieth century to the present to see that ideas about race have long been brought into the American consciousness through technical means. By watching and learning from theatrical performances of race, we, as a society, build, rebuilt and engaged with hierarchies of race. Undoubtedly, the same could be said about film, clothing and other related and highly technological industries. But the adoption of digital technologies and new consumer products, sometimes with liberal attempts at making visible inequality, are further and more subtly engraining hierarchies into quotidian digital experiences. What was once done on the silver screen or on vinyl is now being done in the new, and somewhat undertheorized, spaces of the internet, as well as in the development of an increasing array of consumer technologies such that new space requires careful interrogation.

Benjamin’s chapters, all of which are fascinating, cover examples of technologies as they have related to the perpetuation, whether through malice or through colorblind ignorance, of racism through technological means. In fact, the main theoretic premise is that, in America, race has always been a technology in and of itself: a material means to achieve certain economic and social ends. Racist discourses, unsurprisingly given their deep historical roots, are being continued through digital technologies as well. The first chapter, for instance, covers an intellectual history from shockingly on-the-nose racism in robot advertisements parroting the language of the slavery of black persons, to the new robots, which, due in large part to the overrepresentation of white people in the engineering and design fields, work less well, if at all, for darker-skinned people. This embedded racism, too, is literally encoded, Benjamin notes, into our daily digital lives through the collection and use of massive bodies of data. Attempts to ‘remedy’ this, usually made by white people or white owned corporate entities to increase the visibility of people of color, often results in a visibility of observation rather than a visibility of authentic inclusion.

This line of thinking, which comprises about two thirds of the rigorously cited and example-rich book, is extremely well developed and brings to the fore one of the more troubling phenomena of our time. Following this theoretical journey, Benjamin then, as we all should, turns to praxis. How on earth do ‘we’ ‘fix’ racist technologies? Actually including people of color on technical design teams (185) would be a start. Then, Benjamin warns, there has be great care taken to avoid, echoing Fanon, blackness performed to assuage liberal white guilt. Similarly, the author recommends a reclamation of the conceptual roots of the Luddite movement, which sought to take greater care in technological developments so that we can do so on fair and egalitarian grounds rather than on racist and capitalist ones.

The book is excellent in its writing and execution. Despite being an intellectually rich book, Benjamin’s writing is such that Race After Technology is also a page-turner that keeps the reader engaged cover to cover. Even the appendices, containing copious notes, is a goldmine of worthwhile information. If there are flaws to be found, they are mainly in some of the architectural choices for the work’s scope. For example, the book focuses primarily on race: this is clearly intention from the beginning. But similar analyses, deploying the same critical eye that Benjamin brings to the table, to other vital aspects of identity, such as gender, body type and spoken/read language groups would further the overall project of mapping out what, exactly, is going on with current uses of technologies within and constitutive of our lives. In particular, it would have been apt to see studies and references to the literature concerned with the consumption of social media and how that relates to self perception surrounding approval or disapproval of ones own body. However, for the sake of completing a title without it becoming an unpublished magnum opus of a lifetime of research, the focus on race is more than sensible. Broadening the analysis, however, would have provided more to work with for activists seeking clear answers to the as of yet open questions of digital life.

Race After Technology sits at an intersection of several bodies of literature. The consideration of technology as a humanism or as an assemblage situated within a particular culture places the book squarely as a work of critical theory rooted in Dialectic of Enlightenment. The focus on race, in an attempt to reclaim blackness rather than present it through the frame of white, bourgeois, capitalist discourse, adds a major postcolonial element to the text. Finally, the focus on performance of race through technology brings to the fore a focus on both performance and the hierarchies in which those performances occur: the influence of Foucault and Butler is strongly felt here. Arguably, Benjamin sits at the ‘cutting edge’ of critical thought as it is understood by those of us both living in and studying politics in the age of the internet.

Intellectually, the work stands at the forefront of what is of much concern for political theorists today. Over the last two decades, the internet in particular and technology more broadly has expanded at an increasing rate into our daily lives. Much of this expansion has been subtle, as Benjamin notes, and that makes the features and aims of those expansions difficult to identify. What this work does brilliantly is to begin to shine a light on part of this creeping technological ‘progress’, and begins to rid us of foolish notions that technology will, by itself, save us from ourselves. Instead, Benjamin makes the reader look at the often ugly underbelly of the tech industry, and leaves us with a mission to think and act more critically as we relate to digital technologies.

Books like Benjamin’s are rare, in their clarity and their poignancy. There is an increasing body of work concerned with specific elements of troubling online practices, as the generation that has grown up with the internet is coming of age and beginning to write from the perspective of not only scholars, but of humans having been subjected to digital life for most of their living memory. What is lacking, however, is anything resembling a unifying critical theory of technology that incorporates the elements mentioned above, such as race, gender, etc., into a framework for analysis that allows academics to speak with a clear voice on what we ought to do to attempt to make digital life more tolerable, tolerant and democratic. Such a work is not the point of Benjamin’s project, but at least makes for the occasion to call for broader approaches.

Overall, Race After Technology is a powerful diagnosis of an element of contemporary political life, written from the front lines of our intersectional digital struggles. The writing is clear and engaging, making the book more than appropriate for an advanced undergraduate class in political or social theory. The rigor of this well-cited work makes it a boon to practicing scholars and graduate students looking to advance their knowledge on the most up-to-date takes on philosophies of technology. Interested citizens and students of Marxism in particular would find utility in this work, as it updates many of the lines of thinking began in the nineteenth century to our contemporary moment. Simply said, Race After Technology will become a staple in contemporary critical thinking at a time when it is most needed.