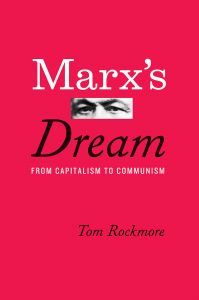 D. Atahan Erbas is studying for a MA degree at KU Leuven. …

What do we think about something when we call that thing a dream? There are two opposite connotations of calling that thing a dream: a positive and a negative one. A dream’s positive connotation is its originality and its hopeful experience which discloses a better situation for the dreamer. A dream is far different and better from the dreamer’s current situation. Furthermore, a dream is not concerned with the past, but the future. That is to say, we dream of something which comes true either at this moment or in the predictable future. On the other hand, a dream’s negative connotation is its impossibility to be realized. We call something a dream when we cannot show why it will come true. Therefore, Marx’s dream is an unconditionally desired but unrealizable situation. Tom Rockmore foreshadows what he circulates as the main thought throughout his book by the title of the book: Marx was a good dreamer-philosopher but he has insufficiently created his thought system. In other words, Rockmore’s approach is double-fronted: While he philosophically feels close to Marx, he puts some distance between Marx and himself. Before stepping in this identification of Rockmore, I rather prefer to begin with some general information which potentially differentiates Marx’s Dream from the preceded works on Marx.

Marx’s Dream‘s fundamental thesis is that Marx tries to answer the question of human flourishing; i.e. “How can human flourish?”, throughout his writings. The book consists of three chapters. This thesis is the theme of the first chapter. According to Rockmore, this question becomes concrete in the writings of Jean Jacques Rousseau, but which originated in ancient philosophy. There are two implicit but remarkable claims implied by this thesis. First, Marx’s writings are more philosophical than it has been thought to be. In general, Rockmore deals with characterizing  Marx as a philosopher. This effort is kind of a recovery project towards the image of Marx in the literature. In this regard, and throughout the book, Rockmore encounters with Marxism. For him, ‘Marxism is a series of misunderstandings of Marx’ (4). Roughly, what Rockmore means by Marxism is reading Marx with a sympathy for Engels and an antagonism towards Hegel. Therefore, recovering Marx means approaching Marx’s theory by differentiating it from Engels’s views and keeping it close to Hegel’s standpoint. For Rockmore, Engels remains insufficient about philosophy, while Hegel is a decent philosopher. In this regard, by showing identities between Marx and Hegel, and the antinomies between Marx and Engels, Rockmore aims at recovering Marx as a philosopher.

By showing some parallelisms between Hegel and Marx, Rockmore locates Marx in the tradition of German Idealism. However, Rockmore’s investigation is not limited to Hegel’s writings. He considers Marx as having relations with Feuerbach and, unusually, Fichte. This is the theme of the second chapter. In this chapter, first of all, Rockmore enumerates the errors of Marxism towards Marx’s writings. For Rockmore, the biggest error of Marxism seems to be characterizing Hegel’s theory as an abstract (or purely logical) theory disconnected from society. However, Rockmore is also critical of Marx’s thoughts on Hegel concerning that error. He argues that Marx has read Hegel insufficiently. For Rockmore, Marx sometimes has a reductive attitude towards Hegel’s thoughts (35). Therefore, while Rockmore values Marx’s thoughts as being more original than what the Marxists argue for, he discredits Marxist’s thoughts on Marx himself and Hegel. Against both Marx and Marxism, Rockmore depicts Hegel as a thinker who tries to solve the problems of the modern industrial society, including  the problem of human flourishing. Rockmore supports his claim by reviving the concepts of property, freedom and political economy in the context of Elements of the Philosophy of Right.

The second implicit claim implied by the thesis, that  Marx’s main concern is human flourishing, is that although there are some ambivalent points, there is a continuity (concerning his aim) between Marx’s early and later writings. This claim is both the strongest (concerning its form) and the weakest (concerning its content) claim of the book. On the one hand, it is the strongest one because it engages with a gigantic literature which argues that there is a theoretical difference between the early and the late writings of Marx. For Rockmore, this literature again consists of Engels’s and the Marxist writings influenced by Engels. Here, the main thesis that Rockmore disagrees with is that Marx displaced philosophy after his early writings and preferred science in his later writings. Rockmore claims that Engels wrongly identifies Marx as the opponent of philosophy and Engels maintains this claim by exaggerating Feuerbach’s influence on Marx. For Engels, reading Feuerbach is the turning point of Marx from Hegel to the so-called scientific materialism. However, Rockmore rejects the so-called dichotomy (between materialism and idealism), as Marx did,  in order to locate Marx into the tradition of German Idealism, not as an idealist but as a philosopher: ‘Materialism, as Marx understands it, is not incompatible with, German Idealism’ (78).

On the other hand, the claim about the continuity between Marx’s writings is the weakest one in the book because it requires strong textual evidence. Naturally, if the question of human flourishing is Marx’s main object, then showing that question conceptually in most of his writings must be indispensable for any possible investigation on Marx. Unfortunately, the book seems to be insufficient in showing that problem consistently in Marx’s works. Rockmore even admits that making the question of human flourishing central in Marx’s writings requires a consistent encounter with that problem throughout (at least) most of Marx’s works, which are not precise and do not mention ‘human flourishing’ per se (3).

Tom Rockmore starts the book with a quote by Georg Lukacs as the following: ‘The unity of theory and practice exists not only in theory but also for practice’ (v). Here,  Rockmore foreshadows the book’s second main thesis, that the relation between theory and practice refers respectively to the relation between the question of human flourishing and the question of how the conditions of human flourishing can be realized in the modern industrial society. This is the topic of the third chapter. Throughout the book, Rockmore takes the point of the eleventh thesis of Theses on Feuerbach very seriously. According to Rockmore, in the eleventh thesis, Marx differentiates the theories which just interpret the world and which both interpret and change the world. For Rockmore, this differentiation is very crucial in order to find an original place for Marx in the history of philosophy, because this differentiation is Marx’s break point from Hegel. In general, Rockmore tries to argue for a strong identity between Hegel’s and Marx’s theories; he thinks that Marx is a thinker who makes Hegel’s thoughts more detailed concerning the modern industrial society. Here, the focal point is that Rockmore seems to agree with Marx that Hegel’s philosophy is concerned with mere interpretation, while Marx’s theory is directly concerned with changing the world. Rockmore’s account of this distinction is the comparison between Hegel’s owl of Minerva and Marx’s new philosophical approach in the eleventh thesis. While the owl of Minerva spreads its wings only with the falling of the dusk in order to look at the past time, Marx’s approach proposes to be concerned with the changeable future of the world. That is to say, while Hegel’s philosophy is past-oriented, Marx’s philosophy is future-oriented.

Marx’s future-oriented philosophy proposes to be the forerunner of a better future which is caused by the transition from capitalism to communism. Here Rockmore gives the main critique, which inspires the title of the book, towards him: Marx’s theory is ambiguous and not competent to explain the conditions of the transition. However, Rockmore’s real problem is not about Marx’s writings but also about his successors who claim to hold a Marxian theory.  According to Rockmore, there are four different strategies to achieve the transition, or  four answers for the question namely “how the theory can be realized in practice?” which were suggested by those successors. These strategies are as follows: through the proletariat, through economic crisis, through politics and through critical social theory. By considering these strategies, Rockmore does not only investigate their consistencies with Marx but also criticizes them from a contemporary perspective of 21st century, which contains a strong critique of Marxist institutions and figures like the People’s Republic of China, the Soviet Union, Lenin etc.

Now let us combine the main points mentioned above and try to find a general frame for Marx’s Dream. In summary, Rockmore thinks:  Marx was wrong about Hegel. Further, he was not competent to create a full-fledged theory as Hegel did. As mentioned above, Marx differentiates himself from Hegel by designating a possible transition of society in the future. Therefore, the end of Hegel-Marx unity is the point where Marx starts to ‘dream’. Marx was not clear about what communism is, he was ‘dreaming of’ a better future. He could not support his thought of transition from capitalism to communism. Furthermore, the successors of Marx (mainly Marxists) were both superficial (or sometimes careless) about keeping Marx’s thoughts alive and erroneous about their expectations from their theory and practice.  On the other hand, Marx was more than what was suggested by Marxism. He was successful in applying Hegel’s thoughts to modern industrial society and achieves a concrete philosophy concerning the condition of capitalism. That is why he is an original philosopher who was different from the preceding philosophers, even from Hegel. Marx was clear and explicit: interpret the world in order to change it! Therefore, Rockmore neither requires us to be the hooligans of Marx (like Marxists) nor to ignore Marx and his writings. In the end, Rockmore seems to hope for Marx’s dream but this does not change the fact that Marx’s dream (as communism) is nothing more than a dream. Thus, Marx’s Dream is a good guidebook on how to take Marx seriously without radicalizing his thoughts in either a hostile or a fetishistic manner. On the other hand, it is worrisome for a reader who expects a perfect philosophical (or political system) from Marx.