Marx & Philosophy Review of BooksReviews‘The Age of Surveillance Capitalism: The Fight for a Human Future at the New Frontier of Power’ by Shoshana Zuboff reviewed by Pierluca D’Amato 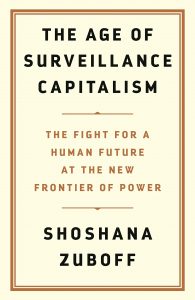 Shoshana Zuboff
The Age of Surveillance Capitalism: The Fight for a Human Future at the New Frontier of Power

Professor emerita at Harvard Business School, Shoshana Zuboff has studied the impact of digital technologies on economy and society since the 70s. Her latest work, The Age of Surveillance Capitalism, proposes a thoroughly documented framework through which understand how the evolution and the capillary diffusion of digital technologies have transformed capitalism. According to Zuboff, in fact, the digital has allowed the invention of a ‘new logic of accumulation’ currently on course to become dominant (14), a ‘new actor in history, both original and sui generis… unprecedented in economic history’ (13-14), that she names surveillance capitalism.

For the author, the age of surveillance capitalism began in 2001, when Google started to develop an economic strategy based on the collection and processing of behavioural information. Users’ interactions with the famous search engine had always produced a superabundance of metadata originating as a by-product of their activities: ‘For example, in addition to key words… the number and pattern of search terms, how a query is phrased, spelling, punctuation, dwell times, click patterns, and location’ (67). This data is of no interest to the users, but constitutes traces that the platform can collect for free as ‘digital breadcrumbs’ (90). At first this information was exclusively reinvested in what Zuboff calls a ‘behavioural reinvestment cycle’ (69-70), as the analysis of the data contributes to making the platform’s systems smarter, refining for, example, suggestion algorithms and other services. With the boom of digital technologies multiplying the interactions with the online search engine, the volume of data produced started quickly to exceed the amount necessary for the improvement of its services, an excess at first considered as mere ‘data exhaust’ (68). Pushed by the pressure of investors mounting in the immediate aftermath of the dot-com bubble’s explosion (71-74), however, the tech giant realised that the quantity and variety of information generated could hold great potential for revenue, and started a conversion of ‘data exhaust’ into ‘behavioural surplus’ (338). This is the central dynamic taken on in? the book.

Google realised that the patterns emerging from the analysis of data could reveal important features of the users. This is helpful not only to track how the users utilize the platform and refine its services accordingly, but also to map their tastes as consumers. This new approach to the information collected, and the consequent investment of data analysis in the field of advertisement, has brought about what Zuboff defines as ‘the darkening of the digital dream and its rapid mutation into a voracious and utterly novel commercial project’ (7). Behavioural surplus came to constitute the centre of the logic of accumulation described by the book, that revolves around the ways in which automatically-collected information is turned into a source of value by the company that extracts it.
Once collected, data is elaborated by what Zuboff calls ‘machine intelligence’ (65); the opaque complex of algorithmic analysis, machine learning and modelling frameworks that companies like Google and Facebook use to produce a series of predictions on users’ behaviours. Such predictions constitute the ‘product’ that big internet companies sell to advertisers, which can use this technology to radically reduce the risks typically related to marketing, as ads informed through this technique are guaranteed to reach only an interested audience, seducing potential customers with tailored offers.

With her book, Zuboff invites her readers to ‘Consider that… the internet is now saturated with commerce, and that commerce is now subordinated to surveillance capitalism’ (11). However, the novelty she ascribes to surveillance capitalism starts to scale down as the logic of accumulation she describes converges with the ones of modern capitalism: cut to the bone, surveillance capitalism falls in fact under the rubric of attention economy, the framework proposed in the 70s by the economist Herbert A. Simon, that looks at how and why a significant part of modern economies is devoted to marketing and advertising. The difference introduced by digital technologies, in this respect, resides in the precision with which prediction algorithms allow advertisers to target specific individuals exponentially increasing their possibility of sale. As the digital reduces the risks of investing in advertisements, it also magnifies their effects by tailoring the form of advertisement on individuals’ tastes and inclinations, allowing new compelling strategies to frame ads, as in the case of Pokèmon Go (315-316) and the ubiquity of the portable means through which digital advertisements are disseminated. These elements contribute to a continuous process of habituation (398-399) and ‘psychic numbing’ (456) necessary for advertisements to hit users under their threshold of attention, while at the same time enlarging the basin of extraction of the behavioural data, which are mined without the user’s awareness. When combined with the secrecy of the modelling operations performed through mysterious algorithmic techniques, this unawareness constitutes the unbalanced distribution of knowledge (181) between the user and the companies extracting personal information that Zuboff exemplifies with the notion of surveillance.

Invented at Google, this logic of accumulation has subsequently spread to Facebook and other online platforms, multiplying the techniques for extraction so that ‘under the direction of surveillance capitalism the global reach of computer mediation is repurposed as an extraction architecture’ (129) able to harness a growing variety of data. In the second part of the book, Zuboff notices how the practices of behavioural prediction and targeting are quickly moving beyond the domain of advertising and are being adopted in other areas such as in insurance and health sectors (172; 213-28). According to the author, this tendency to focus on the detailed determination of future behaviours threatens to culminate in another ‘unprecedented’ innovation deriving from the discovery of behavioural surplus: ‘instrumentarian power’ (376-382). Based on the objectifying knowledge generated through surveillance, instrumentarianism aims at determining individuals’ conducts through behavioural modification. This is the second key theme of the book: knowing what users are likely to do, surveillance capitalists are increasingly able to ‘tune’, condition, and ‘nudge’ users’ behaviours (293-328), moving the customer towards the needs of the capitalist, instead of the opposite: ‘a critical achievement in the race to guaranteed outcomes’ (293-294) that Zuboff names ‘actuation’ (293).
With this idea, described in the third part of the book, Zuboff depicts the last trait of a line of continuity between the digital apparatus of surveillance, its economic deployment and the political scenario. The same system used for the production of personalised ads can be used to track the political inclinations of users and bombard them with personalised political messages with the purpose to shift user’s inclinations. Such possibility completes a framework that should explain both why the value of online interactions has overcome the one of oil, but also how this turnover relates to the trade of behavioural data used to influence the democratic process in US and UK in 2016 via Cambridge Analytica (270-282).

Zuboff’s book has without a doubt the merit of setting up a series of interesting case studies and of presenting in an accessible language an issue related to digital technologies and capitalism, for the very much needed public engagement in these matters requires as much attention as possible. However, The Age of Surveillance Capitalism is far from constituting the ‘Das Kapital for the digital generation’, as The Times columnist Hugo Rifkind defined it earlier this year.

The many claims of unprecedentedness populating Zuboff’s description betray her the tendency to make of a specific case the general rule, or to depict new methods as entirely novel dynamics. The latter, for instance, the case of algorithmically informed behavioural modification and the constitution of what Zuboff names ‘instrumentarian power’ (360-361), is nothing new if considered in relation to cultural hegemonies reinforced by the dynamics of traditional capitalism or state bureaucracy as an instrument of power.

Moreover, Zuboff’s propensity to describe a specific case as a general rule masks the superficial character of her approach to capitalism which neglects the impact of more traditional capitalist dynamics still at play behind its surveillance-oriented variant. In this regard, Zuboff’s take on the historical juncture of 2001 is very telling. About it she writes that ‘surveillance capitalism… is not an inherent result of digital technology, nor it is a necessary expression of information capitalism. It was intentionally constructed at a moment in history…’ (85). Describing the diffusion of this supposedly new logic of accumulation as something preventable, the responsibility of surveillance is moved away from the natural development of tendencies and practices inherent to capitalism and relegated in the sphere of particular business choices. This move allows the author to hint at the possibility to conceive a form of information capitalism from which society could benefit, as if the only thing wrong with digital capitalism was surveillance.

The digital economy, in fact, does not produce value only through the extraction of user’s information and the sale of advertisements. Tantalum, for instance, a mineral used in almost every digital device, is extracted in Congo and Rwanda where its mining feeds armed conflicts in the newest chapter of the dark history of colonialism. Another example resides in the model of Google itself, for which the indexing of webpages is essential. The platform performs this operation undisturbed and for free and in doing so accumulates informational resources (without which search engines wouldn’t have existed in the first place) by exploiting the producers of the content indexed. If we would cut the traditional sources of surplus these companies rely on, the surveillance machine would not support itself.

In conclusion, by maintaining that ‘competitive pressures produced this shift’ (8) away from a more positive encounter of computation and capitalism, from the creation of ‘an exchange-based advocacy-oriented market form’ (121) and towards the logic of surveillance, Zuboff conceals the fact that its logic of accumulation is not new at all. If anything, new are the objects taking up traditional roles in those mechanisms that are inherent to capitalism itself and have been translated on cyberspace. In spite of her insistence that this business model is unprecedented, in fact, an attentive reading of the concepts appropriated by Zuboff can reveal that portraying Surveillance Capitalism as an entirely new logic of accumulation is an overstatement, and that digital surveillance is a capitalist strategy among others, of which, nonetheless, the book offers an interesting description. This, however, should not be used as a honey trap to continue spreading the ideology of a supposedly good capitalism, for there is no such a thing.