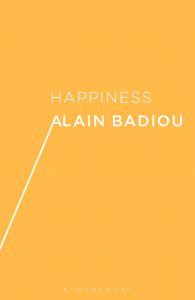 The book’s title, a truncation of Badiou’s Metaphysics of Real Happiness was, we are told, ‘mandated by publishing concerns.’ Presumably, this refers to the book’s marketability within the current publishing whirlwind of books and essays by Badiou, some of which focus on (and are marketed to foreground) compelling and accessible contemporary topics such as love, ethics, and rebellion. Happiness is undoubtedly such a topic. But, what kind of book is this, really? Translators, A.J Bartlett and Justin Clemens helpfully distinguish between Badiou’s ‘big’ and ‘small’ books. In the big books, Theory of the Subject, Being and Event, and Logics of Worlds, Badiou articulates his formal philosophy and systematic ontology. The small books vary in scope and intent but include interventions on real world issues seen through the categories of the big books, while at the same time developing and expanding upon those conceptual categories. Happiness is a small book. Minus the translators’ substantial introduction, it amounts to a mere 92 pages.

While happiness is a classic philosophical topic, Badiou begins by noting that his own philosophical engagements might suggest that one look elsewhere for relevant insights, given his own preoccupation with ‘materials rarely associated with happiness’ (33). In addition to set theory, these include, ‘the French, Russian, and Chinese revolutions, of Robespierre, Lenin, or Mao, all and each marked with the infamous seal of the Terror… recourse to numerous poems thought to be more hermetic than pleasurable … true love … regarding which moralists and prudent persons have always noted that the sufferings it provokes and the banal reports of its fragility render its vocation for happiness doubtful’ (33-34). In addition, he notes that his philosophical masters such as Descartes, Pascal, Hegel, and Kierkegaard seem far from being ‘jolly souls’ (34). More specifically, his philosophical centre stands far removed from what he suggests is ordinarily recognised as happiness, including ‘a quiet life, the abundance of little everyday satisfactions, interesting work, an appropriate salary, an iron constitution, a happy couple, memorable holidays, lovely friends, a well-appointed household, a comfortable car, a sweet and faithful domestic pet, trouble-free children who are successful at school.’ (34)

As Bartlett and Clemens point out in their introduction, the small book closest to Happiness in spirit is Ethics: An Essay on the Understanding of Evil. In that text, no ethical theory is presented, and there is no role for such a theory in Badiou’s system. Instead he rejects ethics as we know it with its departure from the centrality of truths. For him, rather, ethics amounts to an exhortation to ‘Keep going’ with regard to subjective fidelity to the eventual happening of truth. When I picked this book up, I expected this to be essentially his account of happiness as well. In a way, it is. Though, it is also more.

While Badiou situates a discussion of happiness within his operative philosophical categories, the book’s dominant narrative regards the very nature of philosophy. As in many of the ‘small books,’ we find something that isn’t quite, or only, Badiou applying his thought to a topic. Rather, Badiou attends to happiness as a way of pushing forward, in dialectical fashion, his thinking on the nature of philosophy. Despite its publisher’s desire, and its simple, straightforward title, this is primarily a book for those already interested in and familiar with Badiou’s system.

As readers acquainted with Badiou are aware, truths occur through the four procedures of science, politics, love, and art. The role of philosophy is to announce and organise these procedures. Awareness of a truth produced does not need to accompany a truth procedure. Philosophy provides this understanding. What then is the affect of philosophy? Badiou has always emphasised the intensity and transformative dimension of the eventual happening of truth through the procedures. What is new in Happiness is the claim that philosophy is itself productive of happiness. In fact, the philosopher, insists Badiou, is the only one capable of happiness or ‘the true life.’

Badiou frames his discussion of philosophy here by means of the notion of ‘philosophical desire’ which he states is ‘the desire for a revolution in thought and in existence – as much collective existence as personal existence – and with the aim of a real happiness, distinguished from that semblance of happiness which is satisfaction’ (41). Further, there are four dimensions to this desire: revolt, logic, universality, and risk. One senses the pleasure Badiou takes in suggesting that this is also the formula for a desire for revolution: ‘The revolutionary desires that the people rise up; that they do so in an effective and rational fashion, and not in barbarism and rage; that this uprising has an international, universal value, and is not limited by a national, racial or religious identity; finally, the revolutionary assumes the risk, the chance, the favorable circumstance, that often happens only once’ (42).

Badiou sees the contemporary world of the West as inhospitable to these four dimensions of desire whether in philosophy or revolution. According to Badiou, against revolt, the world tries to teach us that all has been achieved, that we are already free. Against logic, we are presented with the illogical organisation of communication where words and images fragment and lose sense through their rapid circulation in a kind of ‘spectacle without memory’ (44). Against the universal, we inhabit a world of specialised and disjointed knowledges, whose false universality is the abstract world of money. Finally, against risk, the world presents itself as one in which it is necessary to calculate present and future security, however tenuous such security actually is.

Philosophy’s task, for Badiou, is to challenge this state of affairs. However, contemporary philosophy is ‘sick.’ All of philosophy’s three dominant forms, which he characterises as the hermeneutic, the analytic, and the postmodern, operate within the same parameters: 1) ‘the metaphysics of truth has become impossible.’ 2) ‘language is the crucial place of thought because it is there that the question of sense is decided’ (52). Such an orientation renders philosophy too susceptible to absorption into the status quo. Within the fragmented space of a plurality of language games, shifting focus to the universal becomes nearly impossible. Badiou instead aligns himself with the Plato of the Cratylus, asserting that rather than beginning with words, philosophy must start with ‘things themselves.’ Likewise, by abandoning the category of truth, philosophy will be unable to ‘face up to the challenge of an existence in servitude to commodity circulation or to the illogicality of communication’ (54). The desire of philosophy, which is also revolutionary desire must, for Badiou, be to find a fixed point from which to interrupt the speed and incoherence of contemporary culture to say ‘this is good and that is not’ (58). Finding this fixed point, which Badiou calls truth, opens the space for a reconstruction of time through the rooted ‘slowness of investigation’ (58). Again, linking philosophy, revolution, and happiness, Badiou adds, ‘Have not wages – which communism proposed to get rid of for humanity – always been represented as an unhappy condition precisely because they are the violent imposition of a heterogeneous time? Have not the worker revolts regularly challenged the punch card and the timekeeper, the controller, the rhythms? All real happiness supposes liberation of time’ (59).

Badiou devotes a short chapter to the ‘antiphilosopher,’ a recurrent figure in his writings, here defined as ‘that particular kind of philosopher who opposes the drama of his existence to conceptual construction, for whom the truth exists, absolutely, but must be encountered, experienced, rather than thought or constructed’ (67). Antiphilosophers are passionate believers who understand something about happiness. Pascal, Rousseau, Kierkegaard, Nietzsche, Wittgenstein, and Lacan are offered as examples. By taking their challenge seriously, the philosopher ‘must impose upon himself the duties to which their acrimony recalls him, for, without them, he would become a consensual democrat, a propagandist of a seemly little happiness, and an adept of the imperative “Live without Idea”’ (69). A bit of despair is a condition of true happiness.

To move more positively toward happiness and beyond antiphilosophy, Badiou asks whether it is necessary to ‘change the world.’ Instead of following the stoic line of adjusting to what is the case, Badiou returns to the category of the event, the emergence of what was seemingly impossible, the new subjectivity that emerges, the joy of this experience and the disciplined fidelity to it. Happiness does not come from doing ‘what you want.’ When the world provides the means for ‘doing what you want,’ the emergence of a new subjective stance is blocked.

Happiness is full of promissory notes. It introduces what Badiou says will be his last ‘big book,’ Being and Event: The Immanence of Truths. Instead of emphasising the way in which his truth procedures differ, he will outline their similarities. For Badiou, this is a practice of philosophy that he compares to the philosopher returning to the cave in Plato. While in Plato, the philosopher would rather remain in contemplation of the Idea and must be forced to return, Badiou suggests that to remain apart with one’s truth is to be deprived of ‘the happiness that only this sharing procures’ (96). The forthcoming book will, he says, be ‘a type of speculative science of happiness’ (99). At stake is whether there is a philosophical subjectivity which he deems the ‘true life’ and gives the name happiness. At the end of his last forthcoming book, Badiou concludes, ‘I will be able to say: philosophy is me. And it is also, equally all of you, who read me, and think with me, or against me as well’ (122).

While the book is filled with schematisms which are sometimes tedious (three dimensions of this, four versions of that) only a few of which I’ve sketched here, the book has a genuine intimacy to it. Badiou writes in the first person and, it seems, primarily for those who know him well, sometimes moving quite quickly over things he knows the reader, like an old friend, long-time colleague, or lover, has heard many times before. At the same time the text displays his urgency to say more, to be clear, to keep going, to re-invent, and to express the “true life” through a generalised fidelity to his still ongoing project. It is enough to make at least the familiar reader look forward to the forthcoming finale.