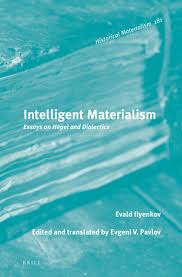 Until the early 1990s, English-language analysis of Soviet thinkers was limited in large part to an anemic interpretation of Lev Vygotsky’s work, often downplaying the integral role of Marxism in his psychological writings. However, since the publication of David Bakhurst’s Consciousness and Revolution in Soviet Philosophy: From the Bolsheviks to Evald Ilyenkov (1991), there has been a steady output of English-language material relating to creative Soviet Marxism in general, and Ilyenkov in particular. In the process, new English translations of Ilyenkov have been made available. Importantly, 2014 saw Alex Levant’s translation of Ilyenkov’s ‘Dialectics of the Ideal’ published alongside critical essays in the volume Dialectics of the Ideal: Evald Ilyenkov and Creative Soviet Marxism. Despite this, there was still only a fraction of Ilyenkov’s more than 120 Russian-language publications available in English.

Intelligent Materialism: Essays on Hegel and Dialectics (edited and translated by Evgeni V. Pavlov), adds another ten translated essays that focus largely on the relevance of Hegel’s dialectics to Marxism, often challenging the official interpretation of Marxism in Russia, diamat. Given the inherent difficulty of Hegelian Marxism, Pavlov’s translation is both elegant and accessible, while also conveying the vitality, sardonic wit and, where warranted, forceful polemical style of Ilyenkov’s writing. The vast majority of Hegel and Marx’s German terminology is translated from Russian in a manner that would be intuitive to a reader familiar with standard translations of Hegel and Marx (e.g. ‘Begriff’ is translated as the now commonly-used term ‘Concept’ rather than A.V. Miller’s use of ‘Notion’).

As the subtitle of the volume indicates, the essays focus primarily on Hegel’s dialectics as expounded in his Science of Logic, also drawing from many of his other works, including Phenomenology of Spirit. The unifying aim in each of these essays is the rehabilitation of a philosophical, rather than purely historical, line from Hegel to Lenin, what he identifies as ‘intelligent materialism’ (69) or ‘dialectical materialism’ (229). The term ‘intelligent materialism’ originated in Lenin’s Philosophical Notebooks, where Lenin observes that ‘[i]ntelligent idealism is closer to intelligent materialism than stupid materialism”(Lenin, 1976: 276). Lenin’s statement provides the unifying force behind each of the essays in this volume. That is, Ilyenkov aims to provide a defence of Lenin’s conception of dialectical materialism, which draws from Hegel’s intelligent idealism, in the face of crude reductionist materialism, which Ilyenkov describes as eventually falling back into a type of crude or subjective idealism, which he ascribes to Italian Marxist Lucio Colletti (35-38) and neo-Kantian and neo-positivist tendencies in diamat (4, 208-247), among others. Although Ilyenkov wrote these essays in the 1960s and 70s, in response to what he saw as problematic tendencies within official diamat and Marxist theory more broadly, they nonetheless address a division in that persists today. As in Ilyenkov’s time, still lacking is a proper understanding of how the ‘ideal’ relates to the ‘material,’ leading to both reductionist and idealist readings of Marx.

For those interested in Hegel scholarship more broadly, Ilyenkov provides a useful interpretive approach that cuts through some of the current debate between the traditional metaphysical reading of Hegel (e.g. Charles Taylor), the general thesis being that Hegel is building a pre-Kantian metaphysics, and the non-metaphysical non-traditional reading (e.g. Robert Pippin and Terry Pinkard), which argues Hegel is continuing Kant’s critical epistemological project without metaphysical ambitions (Kreines, 2006: 466-470). In opposition to these two general interpretations, Ilyenkov steers a course towards a non-traditionalist metaphysical reading, which sees Hegel as putting forward a post-Kantian metaphysics with unfortunate idealist leanings (19-20). In this way, aside from Ilyenkov’s qualified praise of Spinoza’s metaphysics (163), which Vesa Oittinen has astutely observed is based on Ilyenkov’s ‘highly selective’ use of Spinoza (Oittinen, 2005: 326), Ilyenkov can be put in the vicinity of recent metaphysical readings of Hegel by James Kreines in Reason in the World (2015) and Stephen Houlgate in The Opening of Hegel’s Logic (2006). Moreover, Ilyenkov’s interpretation of Hegel and Marx as standing in opposition to philosophical naturalism, broadly understood as the now-prevalent tendency to align philosophy with the natural science, parallels the masterful work of Hegel and Marx interpreter Michael Quante in Spirit’s Actuality (2018) and Markus Gabriel’s Neo-Existentialism (2018). However, given Ilyenkov’s dialectical materialist starting point, he provides a number of uniquely Marxist critiques of Hegel’s idealism, some not entirely uncontroversial, which are elucidating for both Hegelians and Marxists alike.

Given that each of the essays in Intelligent Materialism involves a defence of Lenin’s dialectical reading and critique of Hegel, the book’s subtitle might have been amended to ‘Essays on Hegel, Lenin, and Dialectics’ to emphasize Ilyenkov’s commitment to providing an assessment of Hegel’s dialectics that aligns with and fleshes out Lenin’s writing. Despite the general thematic uniformity of the volume, the essays can be divided into two general categories according to their rhetorical purposes. The first and last essays are written in a polemical style for a broad audience and were published in Pravda, a Soviet newspaper with wide circulation, and Kommunist, a ‘popular Party magazine’ (xi), respectively. The others, both more academic and esoteric, were published in scholarly journals and essay anthologies to address Marxist scholars, sometime directly and vehemently. The fourth essay, ‘Hegel’s Science of Logic,’ was originally written as an introduction for a Russian translation of Science of Logic, but, likely due to Ilyenkov’s status as an outsider, was only published in 2000 as a standalone work. The third essay, ‘The Peak, the End, and the New Life of Dialectics (Hegel and the End of Old Philosophy),’ was only published in Russian in 1991. The organization of the volume, with the general audience essays bookending it, allows the reader to ease into the denser work that makes up its body and ease out with a retrospective piece celebrating the seventieth anniversary of Lenin’s Materialism and Empiriocriticism, a work that underpins the nine other essays. This is a book that benefits greatly being read from front to back with each of the essays progressively feeding into each other dialectically – concepts immanent in earlier essays being drawn out in later ones. An example of this close interrelatedness is how Ilyenkov’s description of historical development as a ‘process of constant organic “rebirth” [of] one concreteness into another concreteness’ (206) in the eighth and ninth essays, provides the basis for characterizing dialectical materialism as the only revolutionary and ‘militant’ philosophy that can identify and leverage the ruptures in the unfolding of history (229).

Although Ilyenkov puts forward a convincing exposition and critique of Hegel’s thought, he occasionally seems to simply take Marx at his word regarding the differences between Hegel’s idealism and Marx’s materialism. This raises some questions about the accuracy of some of the details of Ilyenkov’s critiques without putting the larger project in jeopardy. Although put more strongly than perhaps required, Hegel and Marx scholar Robert Fine claims that ‘if there is one way we should not read the relation between Hegel and Marx, it is through Marx’s own account of it!’ (Fine, 2001: 73). As an example of Ilyenkov simply asserting rather arguing differences between Hegel and Marx, it is worth examining Ilyenkov’s description of Hegel’s insistence on the chronological primacy of ‘words’ (i.e. concepts) over ‘deeds’ (i.e. activity and labour, including their associated products) (75). Ilyenkov argues that in words Hegel ‘sees that form of “determinate being” of the thinking spirit in which it reveals its creative-productive power […] before anything else – before and independently of the real formation of nature through labour’ (77). However, it should be noted that although Hegel saw words as logically prior to deeds, he nonetheless affirmed deeds as chronologically prior to words. For example, in Science of Logic he states, ‘the need to occupy oneself with pure thoughts presupposes a long road that the human spirit must have traversed; it is the need, one may say, of having already attained the satisfaction of necessary need, the need of freedom from need’ (Hegel, 2010: 14). Furthermore, Hegel frequently acknowledged the interdependence of word and deed. To this end, in the opening of Elements of the Philosophy of Right, Hegel states: ‘The concept and its existence are two aspects, separate and united, like soul and body. The body is the same life as the soul […] A soul without a body would not be a living thing, and vice versa’ (Hegel, 1991: 25). Despite this slight divergence between the actual Hegel and the Hegel Ilyenkov accesses through Marx (and Engels), it does not undermine the overarching differences Ilyenkov draws between dialectical materialism and Hegel’s idealism: the Marxist concern with material life over the ideal conceptual form of such life.

The point in raising this issue is not to question the value of Ilyenkov’s contribution to the elucidation of the relationship between dialectical materialism and Hegel’s logic, but rather to suggest that reading Hegel and Marx directly alongside Ilyenkov will both help concretize dialectical materialism and, where required, reveal avenues where they may be brought closer together or further apart. This book has further solidified Ilyenkov’s significance within the canons of both Hegel and Marx scholarship, but more importantly has direct relevance in clarifying ongoing debates in Marxist circles regarding what is meant by ‘materialism’.