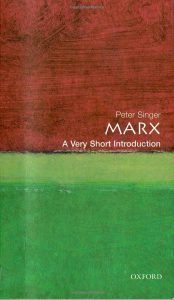 The 200th anniversary of Karl Marx’s birth in 2018 undoubtedly calls for a reappraisal of his thought, its legacy and relevance for the 21st century. Singer heeds this call with clarity and brevity in this revised edition from Oxford’s Very Short Introduction Series. General readers or undergraduates seeking a comprehensive insight into Marx will find this book a stimulating starting point.

Whilst this is a book on Marx, not a book on Marxism(s), the readership should bear in mind Singer’s own claim that ‘any exposition of Marx’s ideas is also an assessment of them’ (86). Was Marx a scientist or philosopher? Is there a unifying theme binding his works? These questions have long dominated debates in Western Marxism. Singer exposes Marx as a philosopher of freedom whose work is unified by its concern with human alienation. Despite making a persuasive assessment, he nonetheless risks suggesting to unfamiliar readers that his implicit left-Hegelian presentation of Marx has an unequivocal status. Perhaps an additional chapter on ‘Interpretations of Marx’ would have encouraged readers to situate Singer’s evaluation against the backdrop of other interpretations.

Divided into eleven short chapters containing well-placed subheadings, a welcome addition from the rolling paragraphs of the 1st edition, the organisation of this introduction makes palatable reading of the denser exposition of Marx’s main theories. Chapters are organized thematically rather than strictly chronologically, producing a navigable presentation of Marx’s works. However, chapters are not designed to be read in isolation, for each progressively portrays Marx’s ideas through their origins in Hegel’s concern with alienated consciousness.

Chapter 2 proceeds from a concise exposition of Hegel’s dialectic of spirit overcoming self-alienation contained in the Phenomenology of Spirit. This provides grounding for the third chapter’s explanation of Marx’s transformation of Hegelian idealism into materialism through his radicalization of the Young Hegelians’ Bauer and Feuerbach’s secular interpretation of the alienation inherent in religious belief into a critique of the alienation inherent within existing socio-economic systems. Fleshing out Marx’s transformation of Hegel’s dialectical conception of history, in chapter 4 Singer describes the decisive role Marx gives the proletariat in humanity’s path to overcoming self-alienation. These initial chapters are largely identical to those of previous editions, framing Marx’s early ideas in continual dialogue with Hegel’s belief in an historical movement towards the transcendence of alienated consciousness.

Marx’s turn towards economics in the 1844 Manuscripts are discussed in chapter 5. Singer considers Marx’s critique of ‘a-historical’ bourgeois economic theories comprehensively, before detailing Marx’s account of how wage-labour alienates man in four ways: from the products of his labour, his activity, his species being and his common humanity (35). Then, he surveys Marx’s arguments on the qualitative difference the abolition of wages, alienated labour and private property, i.e. communism, will make on the human condition. Singer is at pains to conclude that since this ‘first Marxism’ is rooted in a Hegelian concern with alienation, it is ‘a speculative philosophy of history rather than a scientific study’ (37).

Throughout the sixth chapter Singer examines The Holy Family, the Theses on Feuerbach and The German Ideology to track the development of the materialist theory of history. He argues that the contradiction between the proletariat and private property, the doctrine of the ‘unity of theory and practice’ and the description of ‘social power as something which is really nothing other than the productive force of individuals’ (45), are founded upon Marx’s concern with man’s transcendence of alienation. For thinkers such as Althusser however, these works mark a significant shift in Marx’s thought away from Hegelianism towards the science of historical materialism, yet Singer makes little effort to assess whether these works are qualitatively different from Marx’s early works. In doing so, he forgoes inviting readers to consider the relationship between science, ideology and humanism in Marx’s work.

In the subsequent chapter, Singer asks whether the materialist conception of history amounts to a scientific discovery of the ‘law of development of human history’, as Engels claimed. After considering whether Marx thought the productive forces determine the ideological superstructure, he interprets Marx as envisioning society as an interconnected totality (53). However, due to his import of Hegel’s concept of history, and his emphasis on the primacy of reality over appearance, Singer suggests that Marx does not present a scientific theory (55-8). What exactly qualifies as ‘science’ in Singer’s view remains unclear however, for he does not encourage readers to question the metatheoretical assumptions that underpin his discrediting of Marx and Engels’ claim to science. Inviting readers to question whether ‘science’ itself rests upon metaphysical assumptions, such as causality and the distinction between appearance and reality, lest it become ‘superfluous’, would encourage critical thought about the nature of science and ideology.

The eighth chapter provides an overview of the central economic themes contained in Capital, Wage-Labour and Capital and the Grundrisse. Singer draws attention to the influence of classical economists on Marx’s account of the division of labour, the trend towards subsistence level wages, the commodification of labour and the distinction between use and exchange value. He also provides a lucid exposition of the theory of surplus value (66), ‘commodity fetishism’ (68), and the inevitable self-destruction of capitalism through the process of increased concentration of wealth vis a vis the growth in number and breadth of degradation of the working class (73). Summing up Capital, Singer claims ‘many of Marx’s […] theories have been refuted by events’ (75). Capital’s central value, rather, lies in its description of the way in which human beings unconsciously create forces of their own oppression. It is, he claims, ‘a painting of capitalism, not a photograph’ (76).

Chapter 9 explores Marx’s thoughts on communism. Marx’s simultaneous reluctance to describe communism, and insistence that through the abolition of the division of labour, private property and alienated labour, the contradictions that have beset all hitherto existing societies will be transcended, are given equal consideration. Moreover, Marx’s claim that under communism the state will be superseded based on the synthesised interests of the individual and the community is credited as a contribution to moral philosophy (81), a theme Singer explores in Chapter 10, ‘Was Marx Right?’

Marx’s endurance as a philosopher of freedom, Singer claims, lies in his critique of the liberal conception of freedom as non-interference in the private sphere of individuals, a notion championed by proponents of the so-called ‘free market’ today. Singer’s analogy of a mass of car users freely deciding to drive to work rather than take the bus, producing the unintended consequence of traffic jams restricting each individual’s capacity to fulfil their chosen interests (93), illustrates Marx’s concern that unregulated individual action unleashes collective irrationality. This paves the way for Marx’s claim that a planned economy will allow human beings to take control over their creations as a rational community. How to obtain the cooperation required for such an endeavour is, Singer contends, a problem ‘link[ing] his theory with the murderously authoritarian regimes’ that claimed to follow his ideas (94). This may be so, although more attention could be given to the ways this analysis can help explain the impact of privatization on the effectiveness of public service delivery or the tricky logic of combating climate change. Crediting Marx with initiating a field of investigation into the ways socio-economic forces mould human nature, he nevertheless contends that human nature is not as pliable as Marx believed, drawing upon evolutionary biology to state that hierarchical tendencies are commonplace amongst all social mammals, and that greed and the desire for power are the chief reason why attempts to create communist societies have failed (96-8). This may, however, be begging the question, since Marx’s oeuvre lies in his critique of bourgeois ideologies that portray the human condition under capitalism as an a-historical condition of human nature.

Those pondering the significance of Marx’s ideas in today’s landscape will find persuasive evaluations in the final chapter ‘Is Marx still relevant?’ This edition sees Singer explore Picketty’s Capital in the Twenty-First Century (2014), with its claim that whilst wealth inequality is increasing, workers’ wages are above subsistence level and continuing to rise, against Marx’s claim that wages will tend to stagnate at the lowest level sustainable for the reproduction of labour power (108). Which of these hypotheses are correct, Singer suggests, is as yet untold. One must, however, highlight evidence suggesting that rising costs of living coupled with wage stagnation are pushing increasing numbers of working families towards emergency food aid (All-Party Parliamentary Inquiry into Hunger and Food Poverty 2014, Reeves et al., 2017). Whilst maintaining ‘[o]ur era of globalization is Marx’s global capitalism on steroids’ (110), Singer nevertheless claims Marx was mistaken about the extent to which global exploitation of the poor would lead the international working class to unite. Given his central thesis that Marx was a philosopher of alienation, one cannot help but wonder why he pays so much attention to Marx’s ‘unsubstantiated’ predictions, yet little to the significance of Marx’s notion of alienation for a diagnosis of contemporary society.

Considering Marx’s relevance for the environmental crisis, Singer argues the threat of devastating climate change entails we cannot wait until history is ripe for capitalism’s demise, proffering more immediate solutions to regulate the impact of industry on the planet (114). This acquiescence underpins Singer’s dedication of the concluding pages to Popper’s The Open Society and its Enemies (1945), where he concurs with Popper’s dismissal of ‘utopian social engineering’ in favour of practical and immediate political interventions to alleviate the poverty and suffering inflicted by capitalism. But let us consider for a moment that this suffering and exploitation, in a word, alienation, turns the cogs of the capitalist system itself. To understand and think beyond it we need to consider afresh Marx’s diagnosis of alienated consciousness. Overall, Singer’s accessible portrayal of Marx as a philosopher of liberation makes an important contribution to this understanding.