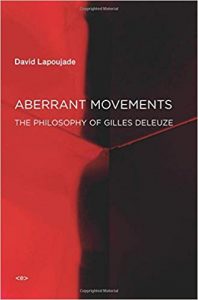 Lapoujade’s originality is that he positions the problem of aberrant movements at the centre of Deleuze’s philosophy: hence the title of the book. Aberrant movements can be understood as movements that break away from a given rational logic and unsettle what is taken for granted (8-9). These movements are inseparable from a destructive critical force, which can ‘threaten life as much as they liberate its forces’ (35). As Rajchman notes in his introduction, Lapoujade’s contribution is to isolate this problem in order to approach Deleuze’s philosophy as a whole; an interpretive gesture that Deleuze employed in his readings of other thinkers. This implies a restatement of Deleuze’s philosophy in ways that are both ‘contemporary and unfamiliar’ (7), even to acquainted readers. Additionally, this focus on aberrant movements differs from other accounts that postulate concepts such as the event or immanence as the essential feature of Deleuze’s work. Hence, this is truly a Deleuzian book: an invitation to a challenging journey that is full of movement and interesting connections, – something that also makes it an arduous read at times, but is worth it.

Lapoujade begins by developing the importance of two questions: the question of establishing a claim (quid facti); and the question of the principle from which the claim derives (quid juris) (39-40). According to Lapoujade these questions run ‘…through all of Deleuze’s philosophy’ (40). For example, in A Thousand Plateaus the question of minorities living under capitalism can be understood as a political manifestation of the question of right: ‘Is there a right of minorities distinct from every already established or codified form of right?’ (41). Philosophy then becomes a critical activity by judging the validity of rival claims (43). This leads us to the question of ground, which is the criterion used to judge claims. However, for Deleuze any attempt to establish a foundation inevitably fails. In Lapoujade’s words: ‘if the question quid juris? imposes on thought the search for a ground, it is at the same time a question that drives thought beyond, toward the groundlessness in which the ground vanishes’ (49). This should not be read as an unearthing of new depths, rather as the production of new surfaces, or the act of drawing a plane.

This plane is ‘a cross section of groundlessness’ (51), which is neither an undifferentiated abyss nor a fully differentiated world. It is that which differs from itself (70). However, as Lapoujade shows us in Chapter 2, throughout the history of philosophy difference has been deprived of its powers by submitting it to representation, through the principles of identity and circularity. In the case of Plato, the difference between claims is subordinated by the attempt to establish their resemblance from the Idea, which serves as a ground. In Kant, the thinking subject serves as the ground for knowledge. In both cases, the identity of the ground forms a circle with what it grounds, in order to judge the legitimacy of different claims. The problem is how to contest the legitimacy of the ground, in order to free difference from representation (66).

As Lapoujade explains, the answer to this question was already found in the aberrant movements of Plato’s simulacrum, which contested the principle of identity between forms and copies; and in Maimon’s critique of Kant, where differentials serve as the principle for the genesis of experience. Difference is, then, that which is ‘no less capable of dissolving and destroying individuals than of constituting them temporarily’ (71). Deleuze’s critique of ground then leads us to the affirmation of the univocity of being, where being is said in the same sense of all being, making it impossible to judge the legitimacy of particular claims and in doing so establish a hierarchy of being. However, a new hierarchy is introduced, ‘…which considers things and beings from the point of view of power’ (77). This marks a shift from the transcendence of claims, which refer to a transcendent ground, to the expression of the powers of being, which can only be evaluated immanently.

So far Lapoujade showed us how Deleuze replaces the principle of identity with a principle of difference behind identity. This represents a shift from judgement to evaluation. In order to understand how this new system of evaluation works we need to look at repetition. In Lapoujade’s words: ‘if difference plays the role of a new ground, repetition is its new agent of selection’ (82). Lapoujade dedicates Chapter 3 to the three syntheses of time, which are the three types of repetitions that constitute time (83). The first synthesis of habit constitutes the foundation of time, where the present is produced and territorialities are created. The second synthesis of memory is the synthesis of the past as the ground of time, where the past reabsorbs the present that passes. Finally, we have the third synthesis of the future. This synthesis involves the repetitions of the eternal return, which affirms the return of only difference (103). The future becomes ‘the reserve of events’, since we do not know what it will bring to the past (95). While the first two syntheses help constitute the ground, the third synthesis opens and deterritorializes this ground as it opens it to the outside (108).

In Chapter 4, Lapoujade develops the connection between the 3 syntheses of time and Deleuze’s reformulation of Kant’s Critique of Pure Reason. The first synthesis corresponds to aesthetics as the theory of the sensible, which is engendered by difference of intensity. The second synthesis corresponds to the analytic of the object. However, the object is now determined by a virtual object, which is not exhausted by its particular existence in an actual form. The third synthesis corresponds to the dialectic as the theory of the Idea. The Idea being the other side of reality that constitutes objects, but cannot be given empirically or conceived objectively (113, 125). The idea is therefore that which can only be sensed, and by being sensed it forces us to think. According to Lapoujade, this relationship between the sensible (aesthetic) and thought (the Idea) is what characterizes Deleuze’s transcendental empiricism. This union between the aesthetic and the dialectic occurs when the faculties are violently taken to their limit, breaking away from common sense and opening up into the dimensions of the Idea.

The process of the expression of the Idea in bodies is the process of individuation. This is the process that relates the aesthetic and the dialectic, where differences of intensity in the Idea determine its actualization. In order to understand how the Idea also affects thought, Lapoujade dedicates Chapter 5 to the notion of sense. Lapoujade begins by relating Deleuze’s division between the aesthetic and the dialectic to the division between bodies and incorporeal entities in The Logic of Sense. The role of sense is to connect these two domains by articulating their difference: ‘sense is what is said of bodies’ (132). However, for Deleuze sense should not be reduced to the dimensions of the proposition, since there is always something outside the proposition that cannot be expressed (nonsense). This excess turns out to be productive, just as aberrant movements distribute being, nonsense distribute sense.

After Deleuze’s collaboration with Guattari, there is a shift from sense to usage that Lapoujade explores in Chapter 6. While the Logic of Sense posited the structural principle of nonsense in order to get to the genesis of sense in language, in Anti-Oedipus we move away from the question of meaning into the question of usage. This question is no longer related to language and signification, but to the production of different social formations. The starting point is desire, something that passes through the body and its organs making it function through organising it and producing the unconscious (which is connected to the social field). The problem of societies is therefore to bind unconscious production to social production, for example, to the expansion of capital. However, desire also holds the power to disorganise the social body. The body without organs is created when the intensive quantity of desire distributes the organs and social formations differently, unlinking their connections (160).

Chapter 7 introduces the shift from desiring-machines in Anti-Oedipus to the machinic assemblages of A Thousand Plateaus. Here the plane is made of multiplicities that populate groundlessness and can assemble themselves in infinite ways (199). The assemblage brings together two different orders: the machinic assemblage of bodies and the semiotic assemblage of signs (which correspond to the distinction between bodies and the incorporeal in The Logic of Sense) (209). However, the relation between this two orders is only one dimension of the assemblage. The second dimension, the dimension of the abstract machine, is made of intensive variations that push language to its limit and disorganise bodies (230). There is a constant struggle between the movement that links multiplicities together creating the earth and aberrant movements that free multiplicities up. In Chapter 8 this struggle is waged between the state apparatus and the nomadic war machine. While the war machine destroys everything that prevents it from deterritorializing, the state tries to appropriate the power of the war machine to install its power and capture the earth (258-259).

In Chapter 9 Lapoujade recognises the asymmetry of this struggle based on his analysis of how the earth is almost totally occupied by the State apparatuses (278). The problem located here is that we are caught in assemblages where the visible and the sayable control one another, something that according to Lapoujade, makes the struggle of minorities imperceptible (271-273). Therefore, the problem of political struggle is not only limited to opposing stratification. It also involves challenging the self-evidence of cliches and making exist what has no right to exist (279-280). As Lapoujade explains in Chapter 10, the struggle is about no longer seeing the same things, and no longer speaking in the same way (308).

To conclude, for Lapoujade the key element of Deleuze’s philosophy of aberrant movements is the problem of limits. However, limits are no longer that which separate and exclude aspects such as the subrepresentative, non-sense, the unknowable, the unsayable and the invisible, as we have seen (312). The limit is rather understood as the paradoxical point where an impossibility leads us to action: the unthought of thought in Difference and Repetition, or the schizophrenic who crosses the limit fixed by the law in Anti-Oedipus. The limit holds the generative power of the outside, which is capable of bringing new populations into existence. The question posed by Lapoujade is: ‘Will the war machine destroy us or will it destroy the limits that subject and enslave us?’ (319)