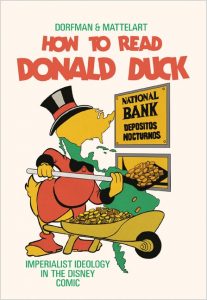 Ariel Dorfman and Armand Mattelart
How to Read Donald Duck: Imperialist Ideology in the Disney Comic

Jarek Paul Ervin is a teacher and writer based in Philadelphia. He is currently finishing a book on …

Ariel Dorfman and Armand Mattelart’s How to Read Donald Duck (1971) was once banned, tossed into the sea, and burned on Chilean television. English-language printings met a marginally better fate. Though Beacon Press distributed the Pentagon Papers that same year, they refused to pick up the project for fear of reprisal by Disney. US customs seized a 1975 translation on suspicion of piracy. For decades, the text circulated through worn-out European imprints and faded photocopies. After almost fifty years, this long-beloved volume of Marxist criticism finally has proper releases in the US and UK.

How to Read Donald Duck is an interpretation of Disney comics, arguing that those seemingly harmless illustrations contain latent (and not-so-latent) justifications for US imperialism. Yet, the book does much more than exhibit a brand of ideology critique. It also harbors traces of a painful historical moment; models an alternative to the liberal schools of discourse analysis that have become orthodox within the academy; and, offers English readers a unique example of materialist cultural studies, attuned to a global context that was generally neglected by the canonic Western Marxists.

The Pluto Press edition preserves all of the pre-existing supplementary materials, including an excellent introduction by translator David Kunzle, as well as an appendix chronicling the piece’s abundant legal troubles. In a new introduction, Dorfman details the tragic Chilean origins of the book. Though its original publication was met with conservative protest, the work truly entered infamy in the wake of September 11, 1973, when Salvador Allende’s Popular Unity government was deposed by a CIA-backed coup. Framed as a subversive communist document, copies were burned on national television; the Chilean navy seized whole boxes and cast them into the Bay of Valparaíso. The creators themselves went into exile. Dorfman, a cultural advisor to a member of Allende’s staff, barely escaped: he was scheduled to be in the presidential palace on that fateful day, but unknowingly swapped shifts with a friend. As a result, he inadvertently avoided the swollen ranks of Chile’s desaparecidos, the dissidents who ‘vanished’ during the fifteen-year reign of Augusto Pinochet.

In light of this political circumstance – and, in light of Disney’s shift toward spectacular multimedia properties such as Star Wars and The Avengers – it might seem odd to dedicate so much attention to dusty old children’s comics. But during the twentieth century, Disney’s global expansion was advanced as much by theme parks and box offices as Sunday papers and magazine racks. Mickey, Pluto, and Donald were exported wholesale to every major continent, showing up in reissues, translations, and even adaptations, where they were redrawn in accord with regional art styles. Ever since his first debut in 1934, that adorable little duck has marched along with The Walt Disney Company – and US empire more generally – as it recreates the world in its own image.

Dorfman and Mattelart evoke this phenomenon in a short preface and introduction, which also purportedly outlines their approach to ‘duckology’. Though these essays don’t actually provide a methodological overview per se, they establish a core purpose: to shatter the illusion of Disney as ‘the inviolable common cultural heritage of contemporary man’, a ‘supranational bridge’ that transcends all parochial divisions (26). The authors argue that behind this screen of benevolence, the comics actually construct an elaborate apologia for the global order. Duckology thus serves as a means of exposé, a tool for dredging up subterranean content within the elaborate fantasy land.

Across six inner chapters, the pair chips away at Disney’s ideological veneer. The topic of Chapter 1 is child psychology, particularly the ways that children are represented as well as hailed as an idealized audience within the comics. This section describes an internal pattern of dominance, which sublimates conventional social relations into the strange familial system of Donald, Scrooge, Huey, Dewey, and Louie. In the place of a clearly defined structure, readers encounter bizarre power struggles and restrictive gender norms, all masked within a ‘system of implicit authoritarianism’ (41).

The following two chapters turn to imperialism. Chapter 2 looks at depictions of the Global South, noting in particular the ways that Disney casts foreigners as primitives, villains, and ‘noble savages’. Chapter 3 more explicitly underscores the colonial content of these tropes. Dorfman and Mattelart locate a number of shockingly direct references to geopolitics within the comics. Donald routinely finds himself in fictionalized locales such as ‘Aztecland’ and ‘San Bananador’, confronting unruly populations and gangs of hapless natives along the way. In one issue, the character is sent to depose a king in ‘Outer Congolia’ after a local tax cuts into Uncle Scrooge’s profits; as a happy ending of sorts, the monarch is restored only when he promises to adopt free trade policies (62-63). In another issue – from 1966, right in the midst of the Vietnam War – Donald helps Prince Char Ming of ‘Unsteadystan’ suppress a communist guerrilla insurgency. This anecdote is followed by a strikingly prescient aside, where the duo warns that Disney follows the shifting winds of current affairs: ‘It will be Chile’s turn yet’ (74).

The next cluster of chapters focuses on the political economy of Donald Duck, and contains some of Dorfman and Mattelart’s most impressive acts as interpreters. Chapter 4 characterizes Disney’s mode of production, which recasts development in fantastical terms:

The production process in Disney’s world is natural, not social. And it is magical. All objects arrive on parachutes, are conjured out of hats, are presented as gifts in a non-stop birthday party, and are spread out like mushrooms. Mother earth gives all: pick her fruits, and be rid of guilt. No one is getting hurt (85).

Framed this way, commodities appear not as the outcome of exploitation, violence, or conquest, but as endowments of benevolent nature. Reality is shrouded, under clouds of magic.

Chapter 5 uses the figure of Donald himself to examine the nature of labor and ownership. The duck is a sort of proletarian everyman, and yet, experiences a strange mixture of precarity and affluence. He does not seem dependent on pittance wages for survival, but instead takes odd jobs here and there, typically squandering the income on silly hijinks or elaborate gifts for Daisy. In this sense, the authors claim, adventure prevails as an ‘abstract form of labor’ (102).

The last chapter finally clarifies the fundamental novelty of Disney comics. Conventional heroes such as Superman and Batman – and, we can infer, countless other media icons – live under laws and structure. Donald, however is beholden only to the boundless freedom of his phantasmagoria, in which imagination papers over the contradictions of social existence (133). This notion is further clarified in the brief conclusion, which proposes that ‘the characters move about in the realm of leisure, where human beings are no longer beset by material concerns’ (143). In the end, then, the duck lives free of the constraints typically foisted on the working class – or any nation that falls under the gaze of the imperial eye.

This part also contains something of the book’s political thesis, a hint as to why this sort of venture might be worthwhile in the first place. Dorfman and Mattelart note that, as long as Donald ‘strolls with his smiling countenance so innocently about the streets of our country, as long as Donald is in power and our collective representative, the bourgeoisie and imperialism can sleep in peace’ (147). It is easy to find this answer unsettling. Indeed, motivations for ‘duckology’ are elusive, and one wonders about the extent to which the account is meant as a practical gesture rather than an act of clever literary study. It is similarly unclear whether Disney comics should seriously be understood as functionalist tools in the perpetuation of US empire, or whether their ideological dimension is simply a residue of more fundamental social-economic processes.

Given such ambiguities, we are confronted with a more substantive question about the utility of these ideas, so many years later – indeed, so many decades after the end of the dictatorship itself. This question is especially gnawing, given that a number of Dorfman and Mattelart’s more interesting suggestions ­– as to subversive techniques of artistic investigation, the nature of aesthetic mediation, the disciplinary role of mass culture, and so on – remain at the level of suggestion. Like Disney’s own ideological content, an answer lurks just out of view.

Ultimately, How to Read Donald Duck is a forceful demonstration of Marxist reading, if not always a template for how to read. It will take some effort to extract a procedure of analysis from within its pages. Some of the finer moments, however, reveal a sensitivity to the nuances of Disney’s universe, without sacrificing the rigor or righteous indignation that legitimates this mode of inquiry. In a moment when Marxism is finding a renewed lease on life, after decades of marginalization in the academy and the political sphere, the book stands out as one of the classics of materialist criticism – a tradition that also lingers just beneath the surface.