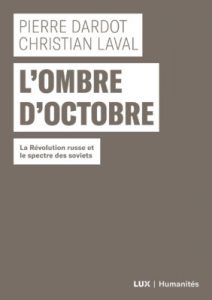 In L’Ombre d’Octobre, Pierre Dardot and Christian Laval continue their project of proposing an alternative to the dominance of capitalism, already positively developed in their previous books. Commun: un essai sur la révolution au 21ème siècle presented this alternative more generally with some critical references to Bolshevism’s state-party communism. In L’Ombre d’Ocotbre, they concentrate on this criticism: what are the problems of such a communism?

What is at stake according to the authors is twofold: on the one hand, the multiple significations that “communism” bore before the Bolshevik insurrection and, on the other, removing the interdiction that the word “communism” would later bear.

The introduction announces the need to go deep into the events and deploy the logic beneath them. Hence it clarifies the shadow of October which darkened the light of the soviets. But why did October, rather than the soviets, gain such a worldwide significance? It is because the former ‘confiscated the prestige and popularity of the soviets to its benefit’ (11). It was hence an attempt to attain political power before everything against the soviets. In applying political expertise, October denied the principle of commun, namely, ‘the necessity of the democracy pursued to the end’ (21). As October approached, Lenin developed the thesis of the need of military insurrection, which was adopted by the central committee on October 10th, a path thus taken essentially different from the democracy prevalent within the soviets.

The first chapter, ‘From February Revolution to October Insurrection’, deals with what the authors call the legend of October. The legend according to them is as follows: whereas February was merely a political revolution, the real revolution was October with the social revolution and the seizure of power. However, the truth is that the real social revolution had already occurred in February since already then the social structure had been radically transformed. October, on the contrary, hijacked these developments in the name of the party. Following what already existed in an embryonic form in 1905, the February Revolution spontaneously, and without following any hierarchical command, brought along diverse forms of generalized self-government at all levels of society, including farmers, workers and soldiers.

In this chapter, more descriptive than argumentative, the writers take a position close to the social revolutionaries of the epoch, criticizing Lenin for forcing an armed insurrection before the Congress of the soviets which would be held on 25 October. In neglecting the intrinsic value of the soviets, in identifying ‘all the power to soviets’ with the need for armed insurrection, in claiming that waiting for the Congress of the soviets would be a betrayal, inter alia, to the internationalist revolution and complete idiocy, Lenin rendered the formation of a government of socialist coalition impossible. Given that this was ‘the formation of a Bolshevik government independently of the uncertain deliberations of the Congress of the soviets’ (55-56), Lenin, in so doing, performed his coup d’état, or rather a coordination between a coup d’état organized under the name of the Petrograd Military Revolutionary Committee and an insurrection animated by the military organisation of the Bolsheviks.

Here, while the authors admit that ‘the Bolshevik theses found an increasing echo in a part of the working class’ (32), the conflicts within the working class, the parts supporting the Bolsheviks and the parts in opposition, are left undeveloped. More precisely, they overlook this engagement by the workers and the authors fail to relate their claim of a mixture of coup d’état and insurrection to the historical events that made the decision on this particular day.

The second chapter, ‘The Sovereign Party’, advances the view according to which the insurrectionary party, the sovereign party, which held an absolute monopoly on political activity through different steps (among others, dissolution of the Constituent Assembly of workers, peasants and soldiers in January 1918), turned out to be one of the worst instruments of counterrevolution of the century. The soviets were actually directed by the party and the council of commissariats of the people, leading to the dictatorship of party instead of the dictatorship of proletariat. In this way, in the hands of the apparatus functionaries and adopting party fetishism, the progress of revolution, the freedom of the opponents and the social inventiveness are all hindered, all without which, it can be argued, there is no socialism.

Although the authors admit that ‘democratism is incompatible with an organization of professional revolutionaries obliged to be clandestine’ (101), they do not analyse the consequences of these developments. Furthermore, in their discussion of the party as both ephemeral and historical, it remains unclear how the fact that Russia does not meet the criterion, namely, ‘the soil of the modern society is the capitalist industry’ (107), is related to the development of the form of the party they criticize. Notwithstanding the promise they give to analyse the facts, their criticism remains rather decontextualized. Along the same lines, they seem to take the proletariat as a homogenous whole when referring to its political creativity. In doing so, their criticism of a monolithic party, as a ‘homogeneous whole’, boomerangs against their own standpoint.

The third chapter, ‘State against Soviets’, shows how the sovereignty of the party in the form of the state is shaped by Lenin’s formulation of the ‘State-Commune’ in his April Theses as well as his later description of the identity of the proletarian class with the communist party and the association of soviet power with the terrorist state. This is owing to an, it could be argued, erroneous development of the concept of the dictatorship of proletariat. Lenin abuses this concept and makes it into an absolute and arbitrary domination by a few individuals of the so-called proletarian state. The definition of the power of proletariat turns into the management of the economy under the control of the state. Bolsheviks, against Marx’s interpretation, become adherents to the restoration of power. The Bolshevik power in this way produced an infernal machine that could do no more than exercise state control.

In the fourth chapter, ‘The Shadow of October and the Occulted Revolutions’, the authors give two examples showing how October overshadowed two alternative revolutions: the Mexican revolution beginning in 1910 and the Spanish revolution which burst out in 1936. Unlike October, these two are social revolutions, since they represent the reorganization of society by society. Unlike October, neither of these revolutions, both instances of political pluralism, are the result of momentary, spontaneous army insurrection of a small group of avant-gardes, but longstanding social development of society as a whole. The Mexican revolution was not only chronologically the first revolution of the 20th century, but a social revolution that radically changed contemporary Latin America with unprecedented initiatives. The Spanish revolution, on the other hand, under the political and military of Stalin’s USSR, through its influence on the Spanish Communist Party, reinstituted the slogan ‘discipline, hierarchy organisation’ and obstructed the emancipatory initiatives engrained in the demands of the grassroots. Both revolutions were instances of the realization of the emancipation of the people by the people.

There are signs that the book was written with speediness. For instance, in many cases insufficient clarification is made for identifying original quotations. Apart from this minor issue, although they mention Lenin’s warning that the party may turn into an ‘authentic oligarchy’ (71), left unclear is what mechanism, what interaction led, as the writers claim, to such a destructive party. An anti-Leninist and anti-Bolshevik book on the October Revolution which adds to an already existing massive literature in North America and Western Europe ought to have had better elaboration on this point. Another difficulty is the point that the very effort to develop a theory of the practical issue of revolution by relying on the thought of a single person, namely Marx, who did not practically have the occasion to lead a revolution, is, could be said, an epistemological risk if not mistake.