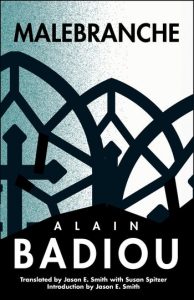 In recent years there has been an increase in books published on the intersections between Christian Theology and Marxism. Books such as Slavoj Zizek’s The Puppet and the Dwarf: The Perverse Core of Christianity, Alain Badiou’s (excellent book) Saint Paul: The Foundation of Universalism, and very recently Terry Eagleton’s Radical Sacrifice have all proven that the two great ‘Grand Narratives’ have much to learn from one another. So when I discovered that a book had been published on Badiou’s seminars on the 17th-century French Cartesian Philosopher and Priest, I could not wait to see what our modern-day Plato had to say.

Badiou’s book Malebranche is very unique. The seminars that compose the book took place in the year 1986, two years before the publishing of what is considered his Magnum Opus Being and Event. Between the years 1983 to 1987 Badiou would give seminars focused on the topic of Being. He split these seminars into three groupings, the first on the philosophical category of the ‘One’ with a focus on Plato, Descartes, and Kant in the years 1983-1984. Then came the category of the ‘Infinite’ with its articulations from Aristotle, Spinoza, and Hegel which took place in the years 1984-1985. And finally came the seminars on the three ‘Figures’ of Being starting with Parmenides, then Malebranche, and finally Heidegger that took place in the years 1986-1987. These seminars are important because they show the germination process of how Badiou came to write his masterpiece. He writes, ‘…the seminar served as a laboratory. I tested ideas in it, either already established ones or even ones that emerged during my public performances…the seminar went hand in hand with the inner construction of my thought’ (xix).  But what is perhaps the more fascinating aspect of this book is that of all the seminars Badiou gave, Malebranche was the only figure he did not use in the construction of his system. ‘This seminar is without a doubt the only one in my entire career that, in terms of the construction of my system, has been of no use to me’ (xxxvii).

But why does Badiou find no use for Malebranche’s philosophy?  There are two reasons. The first is that For Badiou, Malebranche is the vanishing mediator between the Ancient Ontology of Parmenides and the Modern Ontology of Heidegger. It is the classic Dialectical configuration where the Ancient Man of Parmenides (finite) is pitted against the Medieval God with the Enlightenment twist of Malebranche (infinite) and comes out the Heideggerian Modern Man with a higher understanding of both the finite and infinite. God as Theological being serves the role of vanishing mediator and is dissolved in the process of sublation. Of course, those with a Theological understanding know that whenever God appears to have dissolved, the resurrection is always to take place three days after. The second is that Badiou sees in Malebranche a politics that he considers a theoretical dead-end, i.e. the party politics of Marxism-Leninism. Badiou writes, ‘Malebranche is very much ahead of his time, a formidable thinker of the Party, in the sense of the Communist parties at the time of Stalin’ (149).  This Leninist turn in Malebranche can be seen in the first article of the first axiom of his book Treatise On Nature And Grace, ‘God, being able to act only for his own glory, and being able to only find it in himself, cannot have had any other plan in the creation of the world than the establishment of his Church’ (56). From this rock on which Malebranche builds his entire system, it can easily be seen how Badiou takes Malebranche’s demand that the world requires the Church and replaces it with the Leninist demand that history requires the Party; a demand that ultimately Badiou rejects due to the failure of the Anti-Revisionist line in the Chinese Communist Party during the Cultural Revolution.

But what is it about Malebranche that should be of interest to Marxists? Like Marxism at the end of the twentieth century, Christianity was struggling to keep its place at the end of the seventeenth century. With the Scientific demands of Modernity in full swing, Christian Militants such as Malebranche were attempting to reconstitute and revitalize the Christian project to meet the new era’s demands. In Malebranche, we find a figure that is very similar to Badiou who has been one of the leading Marxist theoreticians attempting to lead us out of the crisis of the victory of Neoliberalism and the Post-Modern turn at the end of the last century. Badiou writes, ‘Malebranche tried to do for Christianity what Galileo did for nature: that is to say, he attempted to establish the integral transmissibility of its laws’. This Mathematization of Christianity by Malebranche is very similar to what Marxist-Leninists-Maoists claim when they say their method is scientific. Both have mathematized their fields to rationalize their theories’ existence in modernity, i.e. both have turned their movements into a science.  Of course, perhaps M-L-M is more suited for science since it can fulfill the principle of falsification through Class Struggle, while Malebranche’s theories cannot. But once again we can see how Malebranche pre-configures the Leninist turn and shows us one of the many paths that can be taken in today’s world.

But although Malebranche and Badiou parallel each other in many ways, there is another Christian Militant whom Badiou ultimately sides within the book. Blaise Pascal, the French mathematician, physicist, inventor, writer, and Catholic Theologian was concerned with the same problem of adjusting Christianity to modernity. But what is most striking is that Pascal’s approach was entirely different. Instead of objectifying Christianity into a philosophical system like Malebranche, Pascal instead shifts the terrain and subjectifies it. Instead of a philosophy, which explained the meaning of the world through the existence of the church, Pascal gives us an anti-philosophy that makes the Christian subject take on a world devoid of meaning. In Pascal, we find one of the early germs of Existentialism, and it is clear that Christianity in modernity with the help of Pascal’s successor Kierkegaard followed this path instead of Malebranche’s. In Malebranche, we find the Leninist turn in Marxism, in Pascal we find the turn into the New Left.

In conclusion, Badiou’s book Malebranche is a must-read for Marxists, Philosophers, Theologians, and anyone interested in the Philosophy of Alain Badiou. For Philosophers, the book is a great introduction to seventeenth-century philosophy with figures such as Leibniz, Arnauld, Bossuet and many more haunting its pages. For Theologians Malebranche is an innovative thinker who often inverts old paradigms. His views on creation being almost non-existent (the finite does not glorify God), God working in the Simplicity of ways (maximum effect with minimum means), and Jesus Christ being the mechanism for the dispersion of Grace truly set Malebranche a part. But in the end, when we ring the final bell on Malebranche we must think, ‘He was not someone who saved the church, but someone who built an intellectual monument to it. So he, too, built a Church, but a Church that probably had no services’ (176).