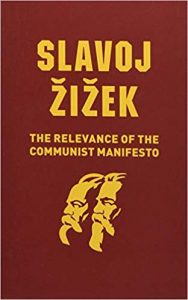 Slavoj Žižek
The Relevance of the Communist Manifesto 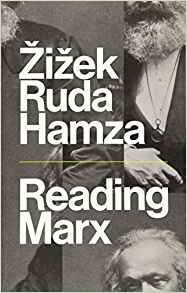 Žižek’s 2018 German-language potboiler on the Communist Manifesto is not that much longer than the thing he’s talking about, and this English-language version of 2019 is thus nicely positioned between the two bicentennials, Marx @ 200 in 2018 and Engels @ 200 in 2019. Predictably, though, we learn much more about the Slovenian philosopher and what’s in his head than we do about the text, whether contextualised as a political intervention at the time of original publication in 1848, or re-read today, if not for guidance, then at least for inspiration. Žižek wonders aloud if we should ‘write off’ the Manifesto ‘as an interesting document of the past and nothing more?’ (57). He seems unaware that for the 1872 republication and in a joint preface, Marx and Engels asked the same question and gave the obvious answer –  albeit with a passing reference to general principles, which they didn’t enumerate.

Throughout his rollercoaster discussion (Heine to Chesterton to Wagner – Richard the composer, not Adolph, the political economist) Žižek plays off ‘the good old Marxist path’ (3) against ‘the historical deadlock of Marxism’ (23). And he sums up the ‘Communist’ experience of the twentieth-century very neatly: ‘Communists in power had two solutions …: the party’s reign over a passive population; and a fake popular mobilization’ (54) – as if we didn’t know that already. At the end he comes to an obvious answer to his question – as Marx famously did: ‘to stop being a Marxist’ but to ‘repeat’ the ‘grounding gesture … in a new way’ (59).

The most exciting section of Žižek’s little book, for me, was when he gets ready to embark on a rewrite of the Manifesto, Part III, in which Marx and Engels undertake a highly critical (and often hilarious) typological review of various contemporary socialisms, other than their own communist variant. ‘Capitalist socialism’ he references to China; ‘reactionary (feudal) socialism’ (borrowed from the Manifesto) he references to Boko Haram. There are really interesting lines of critique here, but unfortunately Žižek sticks to headline-hopping in the international press.

Weirdly (perhaps one of his own ideological inversions-to-an-opposite when the term is applied to him here), Žižek keeps to a descriptive/empirical reading of the Manifesto, rather in the manner of an undergraduate essay: are its predictions right or wrong as of now? And if wrong, is there any hope that anyone can make them come true anytime soon? And where is the proletariat now, the ‘agent’ (24) that is to undertake a communist transformation of bourgeois society? From a self-advertised Lacanian post-structuralist, and digital media humourist, we are surely owed something more interesting and fun to read than this.

Even more disappointing Žižek socks into the most famous misconstrual (ghost/spectre) and mistranslation (solid/air) of any hackneyed reading of the text. Pace Jacques Derrida, the spectre in the famous opening line is a false version of communism created by fearful reactionaries, not a ghost come back from the dead; the authors’ point is quite the opposite: communism is alive and ready to kick-ass in the here and now, just deliberately and sensationally misconstrued as a spectral presence on the move. And pace Marshal Berman, the German text says ‘all that is feudal and fixed goes up in smoke’, which was rather more to the purpose at the time than solids melting into air (how does that work? I thought that solids melted into liquids).

Following on in his descriptive/empirical mode, Žižek observes somewhat disdainfully that the Occupy movement was much nearer 1% than the 99% it claimed to represent, and is thus disqualified to be the agent that the Manifesto is naming (55). But then he obtusely seems to think that the Manifesto announced the dissolution of patriarchy many years ago, so ‘left-wing cultural theorists’ are wrong now to see it in a ‘hegemonic position’ today (15) – it’s hard to resist putting an exclamation point after that comment.

My suggestion here is for an alternative reading strategy: why not see the Manifesto as a political intervention cast in a rhetorical/constructivist mode, striving to stimulate political activity in order to enact the scenario that it names? Isn’t that what a Manifesto is supposed to do, by definition? My conclusion is that Žižek’s thoughts – however disappointingly unprovocative – have little relevance to this eponymous masterpiece of the genre, with its vigorous rhetoric and phantasmic imagery. It doesn’t need him.

Reading Marx shifts the object of commentary, but is it to a political person, formerly living, or to some selection of works that stand on shelves and sit in digital repositories, of which ‘Marx’ – understood as a figural synecdoche – functions as both subject and object? That is, ‘Marx’, the formerly living person, is said to have written ‘Marx’, the texts we read. While this transubstantiation is constitutive of familiar genres – e.g. intellectual biography, scholarly commentary, etc. – it is actually somewhat mystical, so perhaps we should mimic Marx’s sharp-eyed enquiry into apparent ordinariness of any given commodity and resolve ‘Marx’ into its phenomenal forms.

Fortunately the three substantial chapters in this book are individually authored, though the introduction and conclusion are jointly written, so our hermeneutic and subject/object problems are pretty well delimited. The Introduction promises a ‘reunion’ with Marx (15), enticing us with a suitably time-warping image: a young man’s dead body, unexpectedly preserved in a mine-shaft, is claimed many years after his death by his grey-haired bride-to-be-as-was. We’ll see how our three authors get on with this trope: ‘How potent cheap romanticism is’ (with apologies to Noël Coward).

Žižek takes this quite seriously, indulging – quite self-indulgently – in ‘the anachronistic practice’ of getting Marx (no quotes here, see above) to critique ‘new theories’ that propose ‘to replace the supposedly outdated Marxism’ (17). This necromantic ventriloquism then proceeds through 45 pages, and – if it had been properly voiced – would have reconstituted Marx in his scabrous and sarcastic ad hominem ‘send-up’ mode of the mid-1840s and the later Herr Vogt.

However, rather than Žižek’s Marx as avenging angel we have good old Žižek as himself, reviewing Graham Harman’s Immaterialism (Polity, 2016) and Jane Bennett’s Vibrant Matter (Duke University Press, 2010) via a lengthy disquisition on assemblages and various excursions into kitschy-fun films (three versions of Quo Vadis), tossing in a couple of somewhat-kitschy operas (Mozart’s Abduction from the Seraglio and Bellini’s Norma). Ernesto Laclau comes out quite well in this, though not without some helpful correction. Žižek identifies the ‘minimal form of social antagonism’ that Laclau ‘neglected’: ‘antagonism is ultimately that which exists between the particular element that hegemonizes universality, and the particular element that, within this universality, stands for what is excluded from it’ (56). Possibly this counts as a philosophical updating of Marxism, but certainly – and I guess dialectically – it invites Marx to restate what he famously said about philosophers.

Frank Ruda’s chapter is rather more serious in that it re-reads the myth of the cave in The Republic as an allegory for Marxism’s/Marx’s view of capitalism, exploitation and emancipation, and vice versa. Given that William Clare Roberts has recently re-read Capital à la Dante as Marx’s Inferno (Princeton University Press, 2017) this move is on-trend. There is an interesting pay-off to this imaginative exercise: ‘in its globalization capitalism creates … only a shadow of the world’, but instead of a subject ‘to revolutionize it’ there is only ‘the shadow of a subject’ (98). Ruda himself sees this as quite ‘fatalist’ and wonders what could ‘turn the gaze’. Answer, quoting Hegel’s Phenomenology: ‘“there is nothing to be seen” behind the shadow “unless we go behind it ourselves”’ (98-9). I’m afraid, however – and having a Žižekian moment – this does sound suspiciously like Dorothy in The Wizard of Oz.

The final jeu d’esprit of the book is set by Agon Hamza: let’s make Hegel read Marx. This is a really interesting and transgressive idea, given that Hegel’s constant sublation of everyone and everything proceeds from a self-set position of world-historical intellectual superiority. The argument here seems to be that Marx turned to Hegel to get a method of such abstraction that it could cope with capitalism, because capitalism is ‘the most abstract-based system of social organization in the history of humanity’ (107). So if that’s the case, then for our critique – given the planet-threatening ‘“apocalypse”’ of globalized capitalisms (quoting Žižek , 102-3) – we philosophers should return to the master.

But in a rather strange reversal – and there are more reversals in this slim volume than there are in the whole of Feuerbach – Hamza finds that in a sense Hegel has already read Marx, since in the Philosophy of Right Hegel uses material from Adam Smith and other political economists, so Hegel ‘echoes’ Marx (127-9). Hamza seems oddly unaware that Marx’s 1843 manuscript ‘Critique of Hegel’s Philosophy of Right’ picks these sections out for close reading precisely because of this source material. Marx was just as curious about Smith and the political economists as he was about Hegel, as his later works amply demonstrate.

Hamza then turns from Capital to the ‘early humanist’ Marx (136), endorsing Žižek’s charge that an ‘“original sin” of modern emancipatory movements’ was committed there, namely the development of a concept of unalienated labour (127). Correcting that view – via Hegelian abstractions from the Phenomenology – reincorporates the missing negativity, redefines ‘militancy as work’ (via Lenin), and thus we have a ‘Hegelian-inspired Marxist theory of labour’ (127), which puts the theorisations of labour Capital in the shade. Well, maybe.

The authors’ conclusion recommends their ‘unexpected reunions’ as ‘unexpected encounters’ (146). Possibly a dating-app for Marxist philosophers is in the works.