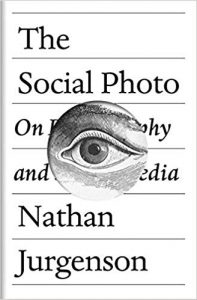 Nathan Jurgenson
The Social Photo: On Photography and Social Media

Marc James Léger is the author of Don’t Network: The Avant Garde after Networks (Minor …

‘God was working around the earth, trying to make it beautiful, but he had to knock off because it was night time, and he said, I’ll come back tomorrow and make it as pretty as the rest of the world … and he got back the next day and saw that the ground had completely hardened, like concrete, and he didn’t want to begin all over again, and in his infinite wisdom he had an idea; he said: I know what I’ll do, I’ll make some people that like it this way.’

Such seems to be the purpose of Nathan Jurgenson’s The Social Photo, only Jurgenson is not a real estate developer, or a tech developer for that matter, but a theorist of social media. Although Culver was a neoconservative businessman, the postmodern logic of True Stories mitigates Marxist critique in favour of the petites histoires that make Culver as interesting as any of the other people in David Byrne’s fictional Texas town. As with Byrne’s more recent work, seeing power with a detached eye is designed to give us ‘reasons to be cheerful.’ Likewise, Jurgenson’s belated and sunnyside postmodernism tells us as much if not more about his subject matter than would writing on social media coming from a writer who is more decidedly working in the stream of critical theory.

The Social Photo is neatly divided into two chapters that add up to just over one hundred pages, and closes with a short ‘coda’ on the social video. The book, it would seem, seeks to live up to the reputed refinement of Susan Sontag’s On Photography (1977) and Roland Barthes’ Camera Lucida (1980), if not John Berger’s Ways of Seeing (1972), and in this regard is more essayistic than strictly academic. Scholarly themes are not so much elaborated and rigorously expounded as they are impressionistically spread, as in a conversation piece, across the entire undertaking. Among Jurgenson’s themes and subjects are the new technological devices that allow us to take pictures with incredible ease and the behaviours that result as applications and platforms incite users to post, share and comment. These new phenomena are related to the more epistemological and sociological questions that were encountered by pre-digital photography, if not throughout the entire history of representation, including: the relation between the authentic and the artificial, reality and virtuality, fact and fiction, the original and the copy, expressivity and mimicry, agency and structure, the real and the simulated, the aesthetic and the prosaic, the amateur and the professional, the everyday and the celebrated, as well as stasis versus flow and information versus communication. Such dualisms are so routinely deployed that one might think Jurgenson to be an intellectual descendent of the Bloomsbury Group. The reader might not be surprised, then, that one of his key concepts, digital dualism, which refers to the inseparability of life online and offline, finds its corollary at the end of the book with the notion of ‘sociality for its own sake’ (111). It’s a nice idea bequeathed to the world by middle-class aesthetes and it may very well serve some of us better than Guy Debord’s theory of the society of the spectacle or Richard Barbrook’s notion of cybernetic communism. One gets a shiver when Jurgenson suggests, in Orwellian terms no less, that the augmented reality created by digitally-mediated and practically nonhuman social photographs should be welcomed as a form of ‘photo-speak’ (18). The qualities and material foundations of the social photo that Jurgenson tells us we should welcome are disposability, temporariness, ephemerality, immediacy, fluidity, distraction, forgetfulness, acceleration, technological will, as well as instant and multitudinous audiences, all of which, ipso facto, add up to a new ‘documentary consciousness’ (39) that he argues is inherently creative and playful (42) – not unlike the work of the proverbial Subway restaurant sandwich artist.

Although on occasion Jurgenson mentions capital interests, he never discusses in any detail the problems of capitalization, the flexibilization of personhood under post-Fordist conditions of work and leisure, the property regimes that condition relations of prosumer exploitation, or in more psycho-social terms, questions of on and offline perversity, harassment, competition and surveillance. The problems of digital capitalism that one might expect to learn about from Evgeny Morozov, Jodi Dean, Nick Dyer-Witheford, Christian Fuchs, Mark Adrejevic or Fred Turner do not seem to have anything to do with the universe of selfies and Instagram. This is a missed opportunity insofar as technology critique and critical theory more generally certainly have some bearing on the visual culture of social media. Despite the overwhelming influence of the Internet and digital technologies on contemporary art, authors like Hito Steyerl are few and far between. Boris Groys has made some valuable efforts based on his appreciation of Soviet modernism but the stridency of the historical avant gardes have seemingly been replaced by the post-political preoccupation with screens. Although media critics like Alexander Galloway, Geert Lovink and McKenzie Wark are sometimes too eager to register immanent shifts to make for very helpful or actionable orientation, they at least have a good sense of who our class enemies are. Just as progressive neoliberals fight against the authoritarian right and pretend that socialism does not or no longer exists, Jurgenson reserves his criticism for mostly easy targets if not binary strawmen that he can flip in ways that have more to do with post-structuralist thought-effects than deconstruction. And so The Social Photo produces knowledge by creating an in-group and a countervailing ‘problem’ that he refers to as disconnectionists. This group of media critics shames digital connection as a handy way to explain intractable social problems (59). Instead of the risks and pleasures that might come from phatic communication, online narcissism, exhibitionism and continual nonlinear becoming, disconnectionists rather presume an intrinsic and unchanging offline self that is threatened by digital uprooting, empty interaction, oversharing and addictive connection (61). The ‘austerity’ (72) promoted by disconnectionist punditry recommends digital abstinence, detoxification and reconnection with the real world. Jurgenson is correct to consider that much of the mainstream media critique he addresses is of a piece with individualistic self-help therapeutics. However, his own hypostatizations are little more than the obverse of the same set of neoliberal injunctions, with its conformist logic according to which resistance to biopolitical capitalism is futile.

On a philosophical level, Jurgenson’s digital dualism is an uninformed if not half-baked neo-platonic metaphysics. No wonder that he seems unaware of the fact that the critique of the naturalist illusion does not emerge with photography, let alone postmodern theory, but with such ill-reputed figures as Descartes, Kant and Hegel. Emerging from the Cultural Studies toolbox, the author’s theoretical approach finds him unable to properly handle even the one reference that he seemingly champions, Michel Foucault. In a closing section on big data, Jurgenson wishes to champion a kind of Lyotardian sublime of unrepresentability against the hubris of tech giants. Precisely at the point where he defers to a vague notion of non-knowledge derived from Georges Bataille, Jurgenson could have addressed social media biopolitical metrics in terms of the power/knowledge formula he discusses earlier in the book. To do so, however, would disturb the picture of social photography that he has elsewhere sketched out for us. However, playing fast and loose with ideas seems to be part of the author’s purpose, as I mentioned, in a book that affects the charm of erudition and that programmatically eschews grand, transcendent theory, which Jurgenson rejects as arrogant fantasy and agenda setting – something he considers untenable in a society that is riven by differences of class, race, gender and sexuality (110). On the contrary, claims to knowledge are not only claims about truth and universality, but also about the social vision that is served by art, politics and science. This presumes not only our immersion in social media but our fundamental alienation in as well as from language, technology and society.

Jurgenson’s neo-Baroque gaming with nature and artifice is hardly worth entertaining in these days of economic inequality, militarism and ecological emergency. What good is it to grant relative autonomy to today’s capitalized tech sector when people like Bill Gates, Jeff Bezos and Mark Zuckerberg own more wealth than the bottom half of the U.S. population? In Like a Thief in Broad Daylight, Slavoj Žižek identifies four predominant attitudes towards contemporary science and technology: 1) a radical naturalism that insists on the scientific disenchantment of reality at all costs, 2) a religious or spiritual reading of the authentic world, 3) a New Age synthesis between scientific Truth and premodern worlds – an approach that reinscribes science into ideology, and 4) a neo-Kantian state philosophy and fear of biogenetic manipulation (Žižek, 2018: 2). As capitalist technoscience challenges all human presuppositions, our task, Žižek argues, is to challenge the nihilism of a social order that presents social control as new forms of freedom. Jurgenson’s critique of disconnectionist puritans is, in this sense, the kind of cynical opportunism that complements the anxieties of those who worry that they have something to lose.

The worldless civilization that is emerging under the auspices of capitalist globalization is explanation enough for one of the social photography symptoms that Jurgenson discusses at length: the modification of digital photos with such subterfuge as faux-vintage filters and Polaroid borders. Jurgenson believes that the popularity of nostalgia ersatz can be explained by social photography’s attempt to make itself seem more important and weighty in relation to not only conventional photography but an imagined digital future that has already arrived in the form of the risks and excitement of reified experience. Had Jurgenson followed through on Fredric Jameson’s discussion of postmodern ‘nostalgia for the present,’ something more than false consciousness could have been derived from the negative reactions to social media. The singularity may not be Donald Trump or Boris Johnson, as Cathy O’Neil has it, but fears about such regressive figures are only a swipe away from social media fawning over politicians like Barack Obama and Hillary Clinton. A more realistic cognitive mapping of a world that no longer experiences itself in class terms gives the social photo its particular, contemporary historicity, its rejection of historical perspective, understood in terms of class analysis, at a time when the postmodern ‘end of history’ has itself passed into insignificance if not into identity and protest politics. What Jameson decried as Nietzschean acquiescence to the present and to future misery (Jameson, 1991: 286) is what Jurgenson champions as an exciting, non-calculated and non-calculable de-normalization and de-valorization of social life as we may or may not know it.