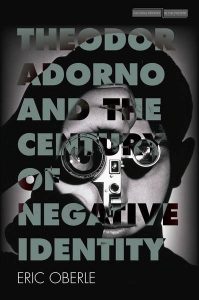 Eric Oberle
Theodor Adorno and the Century of Negative Identity

Philip Højme is currently pursuing a doctoral degree at the Polish Academy of Sciences in Warsaw, …

In Theodor Adorno and the Century of Negative Identity, Eric Oberle examines the major works of Adorno in a new light. Seeking to recast contemporary discussion in light of the overarching focus on (negative) identity found in much of Adorno’s writings, Oberle sets out by proposing that the exile of the Frankfurt School played an important role in reorienting their focus from a broad universalism towards a universalism which was up to the task of examining the reality of the world in the wake of the Second World War. As the first book in a two-part series, this title offers a new take on the formative experience which the American exile offered the Frankfurt School’s theorists, while focusing mainly on Adorno and Max Horkheimer, but mentioning other important figures like Erich Fromm, Herbert Marcuse and Friedrich Pollock, to name only a few.

From jazz, through mass media, to pragmatism and positivism and other interdisciplinary studies, the reader is presented with the proposal that Adorno’s experience of exile had been formative for what would later become Adorno’s theory of negative dialectics. This particular understanding of identity is a reversal of Hegelian dialectics (Hegel claimed that the mediation of identity and non-identity resulted in a reconciled positivity of new identity) for which Adorno posited that the mediation of identity and non-identity resulted in non-identity (i.e. negative dialectics makes visible the non-identity of concepts and objects). By examining Adorno’s works from the 1930s through to the 1950s, Oberle suggests that these years were pivotal, serving as an experience which would greatly inform his later development of a negative dialectic and his views on the role of philosophy and sociology. Concluding the book around the time of Adorno’s return to Germany in the 1960s, Oberle sets the stage for part two, which will continue possibly by examining the work of Adorno’s later magnum opus Negative Dialectics (1966), Adorno’s theory of aesthetics and the student revolts of that period – what Stuart Jefferies has called ‘Philosophising with Molotov Cocktails’ (Jefferies, 2016: 325).

Tracing the introduction of the notion of identity into mainstream academia, to Erik Erikson’s Childhood of Society (1950), Oberle argues that this positive conception of identity, which Adorno encountered (prior to 1950) in America, was a theory which proved important as it sparked a critical response and a life-long preoccupation with these kinds of questions. Instead of a positive notion of identity, Adorno would propose a negative one, i.e. Adorno would place emphasis on non-identity as opposed to identity. Adorno would spend much of the American exile ‘sneaking’ continental philosophy into American academia, while at the same time being careful not to become ostracized by lacking an audience, peers and people with which to collaborate.

The American experience and encounter with pragmatism was an experience necessary for the first generation of the Frankfurt School to bridge the apparent gap between their own more individual thinking, e.g. Dialectics of Enlightenment (1947) or Minima Moralia (1951), and the theories of their collaborators on the Studies on Prejudice (a five-volume book series), of which The Authoritarian Personality (1950) is the first volume. The gist of Oberle’s claim in this regard is that this experience of having to fit their work within, or into, American pragmatism and having to work together with empirical researchers, forced Adorno (and Horkheimer) to reformulate their theories, making them intelligible within this context:

The conflict between Adorno’s idealist and social universality and the American celebration of relativism and cultural particularity would shape not only his experience but also [Adorno’s] approach to philosophy and the social sciences (22).

Thus their exile sparked an interest in how to explain interdisciplinary knowledge, i.e. how can different disciplines looking at the same object reach a multitude of conclusions, all of which might be equally valid (or invalid)? Oberle suggests that this is the philosophical kernel that would later grow into the theory of negative dialectics. This curiosity for the possibility of interdisciplinary knowledge is found in many of both Adorno and Horkheimer’s works from this period, suggesting that their American exile served as an incubator for both the later Adorno’s philosophical and sociological works.

Reading Oberle’s book gives the reader a feeling that there is a dialectical interplay at work. On the one hand, there is The Authoritarian Personality and more generally, Studies on Prejudice, the bread and butter for much of the Frankfurt School during their exile. This research was interdisciplinary in its fusion of American pragmatism and empirical research with the ‘German’ academic tradition of the Frankfurt School, the latter meaning those theoretical considerations which derived much of their substance from Freud, Marx or German Idealism. The general idea seems to be that the Freudian primacy of individuals, mixed with Marx’s insights about society, could provide a theoretical underpinning for an interdisciplinary project like the Studies on Prejudice where many different researchers are working within one overreaching theoretical framework. Oberle suggests that the balancing of Freud’s theories, against the backdrop of ego psychology, took its toll on the formulations which Adorno could use in The Authoritarian Personality as ‘Adorno’s invocations of Freud’s structural model in The Authoritarian Personality [had to] conform to the basic contours of ego psychology … [and adhere] to empirical psychology’s notions of a ‘structural moral agency’ and resistance to intraceptive narratives.’ (253). Adorno would thus have had to compromise an orthodox Freudian understanding of certain psychological terms to make them pass muster with the American collaborators on this project. In addition, the dialectical tradition of Kant and Hegel seems to have provided a way for Adorno to understand how different scientific paradigms play out against and with one another in interdisciplinary studies. Although these considerations were rather ‘private theories’ than theoretical or methodological discussions with their American collaborators, their ‘ghosts’ seems to be visible in Adorno’s way of working with the manifold paradigms and authors on Studies of Prejudice.

Dialectic of Enlightenment is reinterpreted by Oberle as a kind of private elaboration of the epistemological difficulties which any interdisciplinary project (e.g. Studies of Prejudice) might encounter when attempting to reconcile different disciplines’ conceptions of knowledge, truth or different methodologies. By placing an emphasis on the relation between these two widely different projects which Adorno (and Horkheimer) undertook during their exile, Oberle argues that there is a need for research into this neglected aspect, as it seems unlikely the projects did not have an influence on one another – though this is the most common understanding of the (lack) of direct influence between these two projects. The general suggestion seems to be that Dialectic of Enlightenment ought to be thought of as a compilation of those theoretical considerations which could not be shared directly with their American counterparts, thus making each project the other’s dialectical extreme counterpart.

This is a task which colours the book so vividly that it seems to overshadow other, earlier, influences on Adorno’s theoretical development, leaving these almost completely aside. In this regard, it could be suggested that by neglecting the role of Walter Benjamin (who Susan Buck-Morss seemed to find so important that The Origin of Negative Dialectics [1977] has three chapters dedicated to the debates which Adorno had with Benjamin, while also suggesting that Benjamin was an important figure in Adorno’s life and philosophical development), Oberle frames the discussion of Adorno’s negative dialectic more in relation to the years of exile, neglecting the time prior to this and even leaving out the correspondence between those Frankfurt School theorists in exile and those who did not make it (Benjamin died attempting to cross into Spain from France in 1940). It is an important omission insofar as Benjamin’s Trauerspiel (1928, translated as ‘mourning play’ by most English translators) was important for Adorno’s developing understanding of dialectics. Specifically, it seems awkward to leave out the Benjaminian notion of constellations, which is essential for Adorno’s negative dialectic, together with the fact that Adorno’s idea of philosophy as an immanent critique ‘bound Adorno to Benjamin more than Horkheimer’ (Buck-Morss, 1977: 66). Both are of importance if one wishes to understand what negative dialectics is.

In general Theodor Adorno and the Century of Negative Identity proposes a new and interesting interpretation of Adorno’s years in exile, and the overall style of the book is useful for scholars of Adorno, the Frankfurt School and students interested in an introduction to both Studies of Prejudice and Dialectic of Enlightenment. The book contains a great mix of historical and theoretical elaborations on the most important developments during Adorno’s years in exile and, as such, it does not presuppose any specific knowledge of the Frankfurt School by the reader, though this would not be a disadvantage. While it does seem problematic to have omitted any real mention of Benjamin, this does not constitute a criticism of the general project of Oberle’s book. It is rather a critique of whether it is possible to leave Benjamin out of the story of Adorno’s philosophical development, and one might hope that Benjamin’s influence will appear in the second book.