Marx & Philosophy Review of BooksReviews’99 Theses on the Revaluation of Value: A Postcapitalist Manifesto’ by Brian Massumi reviewed by Elizabeth Vasileva 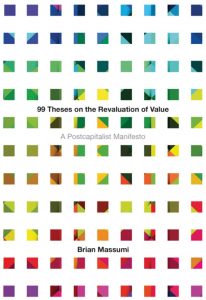 Brian Massumi
99 Theses on the Revaluation of Value: A Postcapitalist Manifesto

Elizabeth Vasileva is a PhD candidate at University of Loughborough, working on Deleuze and …

Continuing his experiments in new materialist politics, Massumi’s second collaborative book with SenseLab, 99 Theses, points to an anti-capitalist programme that breaks with the usual Marxist doctrines. At once a work of philosophy, economics, ethics and politics, this book draws heavily on Massumi’s previous works, most notably The Politics of Affect (2015), as well as rich lines of thought drawn from Deleuze and Guattari’s collaborations. Indeed, for those swimming in these murky poststructuralist waters, few of Massumi’s propositions will sound unfamiliar. Most pertinently, Marx’s labour theory of value is reconfigured through his ontological lens, injecting into the analysis a qualitative and affective field which serves as the central consideration of the book. As such, 99 Theses could happily be read alongside the two volumes of Capitalism and Schizophrenia, the works of Hardt, Negri and Lazzarato as well as more on-the-ground theory by authors such as The Invisible Committee. His concern with digital and machine-driven economics also touches the fields of post-humanism and digital humanities. Hence, this is a book which will likely require several visits before it is possible to settle on its importance; each thesis requiring its own analysis and pursuit of the many connections it makes to other theses within the book.

Presented in the form of lemmata and scholia, 99 Theses has a very clear Spinozist influence both in structure and philosophical inclination. The text is short but dense. Its fragmented form invites the reader to travel around the book to make their own connections. Purportedly a manifesto, Massumi seems a little uncertain of who the audience for the text might be, something somewhat common in works infused with Deleuze and Guattari’s thought. One of the effects of this is that 99 Theses transformative ambitions could appeal to a wide range of political positions (Lamerichs 2019). Although the book clearly has an anti-capitalist bend, Massumi admits himself in T11 that capitalism is masterful in using the logic of affects and relationality to produce value. This conviction is not too dissimilar to the basis of previous criticisms of Massumi’s works where politics of affect were accused of being at worst fascistic or at best apolitical (Devellennes 2017). However, 99 Theses tries to ameliorate this, including declaring support for projects such as blockchain, SenseLab, Faircoin, etc. This move might seem unusual, since Massumi’s affective approach to politics previously involved a commitment to aesthetics, nonetheless he conceptualises these projects as creative and productive of ‘alter-value’. The main idea he puts forward, namely that we need to be somewhat complicit in capitalist market structures in order to subvert them, is, of course, not new. Accelerationism is based on a similar argument, through also utilising Deleuze and Guattari’s theory. The main difference is Massumi’s emphasis on creative and collaborative practices, which he exemplifies with the open access publication of 99 Theses, is coupled with an open online invitation for comments and thoughts from its readers (full draft of the text can be found here: https://manifold.umn.edu/projects/on-the-revaluation-of-value). Unlike solitary academic work where a book of philosophy is presented in its finished form to the audience, this makes the little manifesto an exercise in the practices Massumi advocates; of collaboration towards joyful affect and production of life-surplus value. Thus, this book is best approached as a work-in-progress developed by various contributors, rather than Massumi’s own scripture.

Philosophically, the text is not yet quite complete and detailed enough in its arguments to be satisfying to those well versed in the field, and not quite approachable enough for an introductory text. Many of the concepts, such as ontopower, are drawn from previous works and preparatory reading is required to wrestle with these arguments, especially since they are sometimes presented in a truncated form. However, those familiar with the ontological framework Massumi brings to bear, will find plenty to be excited about and a clear thesis to consider. The first proposition the book makes is that we need a new theory of value.

Artfully blending Deleuze-Guattarian arguments with Marxist analysis, the book tries to take both the economic and ethical conceptions of value out of the hands of capitalists and urges people to refigure them qualitatively, or affectively, rather than quantitatively. Massumi, however, does not necessarily make a clear distinction between the economic and ethical concepts of value. This decision works well in some instances and less so in others. Using Marx’s labour theory of value and an understanding of capitalist production through exploitation and necessary labour as a starting point, Massumi’s first thesis is that contemporary capitalism has reformed the way ‘value’ is understood. He claims that today value is predominantly considered a quantitative measure. In T8, this is seen to contribute to a self-perpetuating circle of limiting value to monetary or economic value, obfuscating its importance and use in other spheres of life, making it impossible to question the future of capitalism. Provocatively, in T12, he charges Marxism with the same mistake – containing value within quantifiable limits. Instead, 99 Theses argues, value needs to be understood as ethical, qualitative, personal, immanent, and needs to be detached from normative structures. Hence, Massumi’s project – drawing on his previous work on affect – is to open up a post-capitalist world by redefining value. Affect, in this sense, serves as a new framework for an analysis of capitalist economy, producing a more complete picture of how it functions.

A good example of this unusual combination is the concept of processual surplus-value, also called surplus-value of life, which is concerned with the intensity of lived potentials. Massumi arrives at this concept by coupling Spinozist/Deleuzo-Guattarian affect and Marxist surplus-value. In T16, we encounter surplus-value as defined by Marx – a quantitative differential, closely tied to labour-time. However, for Massumi, to understand capitalism we need to understand what keeps capitalism alive – and that is more than simply surplus-value. On this basis, Massumi argues that surplus-value is at the heart of growth and capital accumulation, which in turn is capitalism’s constitutive tendency (or desire in Deleuze and Guattari); that which keeps it growing and ticking. Processual surplus-value, then, cannot be reduced to surplus-value, but needs to be analysed as a qualitative differential of intensity. As the book unfolds, this concept reveals elements of capitalism that are not necessarily obvious at first glance, and might shed new light on old debates.

As a work of ethics, 99 Theses provides a robust analysis of the ‘human-capital subject’ and, avoiding accusations of being apolitical, develops two key concepts through which politics can proceed: complicity and resistance. Following Foucault, Deleuze and Guattari, Massumi understands the (neoliberal) subject as an effect of power and sites it in a matrix of discipline and morality that will be familiar to many readers – indeed, sympathy towards this view is essential for what follows. Massumi looks at ways in which capitalism might be transformed into post-capitalism, referring to local currency initiatives, cryptocurrencies and sharing economies. While further, 99 Theses hints at an engagement with radical or anarchist politics by incorporating and modifying Hakim Bey’s notion of the ‘Temporary Autonomous Zone’, developed in his book T.A.Z. (1985). Massumi’s sees the possibility for similar autonomy from the state in digital spaces which are collaborative and provide alternatives to the dominance of capitalism.

It may come off as quite flat in its final moments, following the current trend of promoting non-violence and (autonomous) engagement with the capitalist process rather than a more radical severance and overthrow. Though patently not a call to revolution, the arguments for the particular kind of transformation Massumi believes is necessary are well formed. Armed with an analysis of capitalism, he asks, how might we collectively find ways to reassert the value of life and fight back against the pernicious quantification which finds its way into ‘every cranny’. The answers might look a bit unsatisfying to traditional Marxists, lacking ideology critique and vanguard action, but it is clear that Massumi’s ideas are deployed in the service of transforming society.

Massumi offers a wide range of amazing slogans, such as ‘Occupy surplus-value’, but also confronts readers of Marxism with some challenging questions. By leading us though an ontological map of capitalism, 99 Theses draws out and reformulates oppositions such as process and system, quantitative surplus-value and surplus-value of life, and value and normativity. The reader is compelled to look again into the assumptions of orthodox economics and Marxian analysis and understand capitalism as an emergent process, constitutive of modes of existence and and a process that draws from the qualitative field of ‘life itself’. Through the use of contemporary finance capital, digital blockchain currencies and datamining Massumi paints a compelling picture of capitalism’s processual flow; the capture of futurity in the present and its operation as a power function over life which cannot be reduced to class terms such as capitalist/proletarian. It might be hoped that 99 Theses could replace Capital’s robust critique of capitalism or that its proposed forms of resistance could be as influential as those of the The Communist Manifesto, but its incendiary power seems a little weak compared to the spirit it is channelling. That being said, Massumi certainly puts forward some interesting ideas about how value functions in contemporary capitalism, and what options we have for change.