Marx & Philosophy Review of BooksReviews‘Marx and Hegel: On the Dialectic of the Individual and the Social’ by Sevgi Doğan reviewed by Lewis George Bloodworth 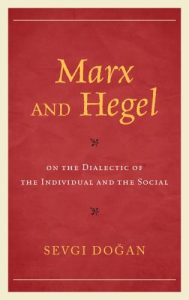 Sevgi Doğan
Marx and Hegel: On the Dialectic of the Individual and the Social

Sevgi Doğan’s recent book offers an interesting and substantive reappraisal of the question of individuality in the works of Marx and Hegel. The crucial myth that Doğan is attempting to disprove, one often wedded to liberal hegemonic discourse, is that Marx completely ignored the notion of individuality – preferring a politics of homogenising class struggle. For Doğan, this is partly a problem of the scholarly acceptance of well-worn dogmas and a failure to examine Marx’s earlier works and how they attempted to overcome the limitations of Hegelian philosophy. As she writes, ‘Marx did not forget the existence of the individual but aimed at revealing and exposing the illusory existence of the individual in civil society and the political state’, which by extension meant the Hegelian ideal state (90). Doğan focuses her exegesis on several key texts: for Hegel, the Philosophy of Right and the Philosophy of History, and for Marx, the Economic and Philosophical Manuscripts, On the Jewish Question and On the Critique of Hegel’s Philosophy of Right. Focussing on earlier works by Marx is important to her analysis because it is here that Marx best shows how he dealt with Hegel, how he worked through the dialectic in order to enact a fuller understanding of the historical and material determinations of contemporary individualism. The book itself is divided into three chapters. The first chapter focuses on the emergence of the concept of the individual in Greek and Christian philosophy. In the second, Doğan develops the concept of the individual found in Hegel. Finally, in the third chapter, Marx’s relationship to Hegel is explored in depth along with some mention of the debates surrounding textual interpretation and Marx’s debt to Feuerbach. This review will focus on this third chapter and compare Doğan’s arguments with pre-existing debates and Etienne Balibar’s recent work on the notion of transindividuality, which provides useful contrast to her own analysis.

Doğan’s book offers a helpful historical examination of the core roots of Marx’s conception of individuality and how it begins to move beyond an essentialist anthropology of man, whilst preserving a dialectical approach of Hegel. Doğan’s thesis is perhaps reminiscent of Ernst Bloch’s essay ‘Commentary on “Theses of Feuerbach”’ which expertly dissects Marx’s critical engagement with a speculative philosophy of the Idea (Hegel) and an ahistorical conception of man (Feuerbach): ‘Feuerbach’s anthropological materialism facilitated the transition from mere mechanical to historical materialism’ (Bloch, 2018: 62). For Bloch, Marx establishes the conditions for a real humanism, one which can finally engage with the world, transform it and enact a concrete utopia freed from the trappings of idealism. Of course, there is a debate here, one which Doğan does not fully address; namely, the legacy of Althusser and his project of theoretical anti-humanism which evolved in 1960-70s. In For Marx, Althusser attempted to disentangle Marx’s advancements beyond Hegel by articulating the notion of an epistemological break, suggesting that he not only inverted Hegel through a reading of Feuerbach, but that Marx actually completely broke with Hegelianism – ‘to turn an object right round changes neither its nature nor its content by virtue merely of a rotation!’ (Althusser, 2005: 73). Althusser’s Marx rejects a fixed subject of history, a teleology of the Idea through which past and present must conform. But Doğan’s reading traces a Marx which in many ways remains connected to Bloch’s problematic, utilising a humanist thesis to expose the sociality of the individual – the way in which a transformative and socially engaged species-being fundamentally contradicts the way in which our society presently functions, whereby humanity’s inherent productivity is limited and contained by relations of domination.

Doğan’s thesis situates the dialectic of the individual and the social upon an ontological/economic foundation and a subsequent political dimension (85-6) – with both implicated in the concept of alienation. It is only in Marx’s early works where we can truly get to grips with how he more readily became a full materialist – a materialist not happy to merely speculate on metaphysical matter, but rather one engaged with the politics and struggles of his time. Alienation as a concept is incredibly important to Marx’s early works, and Doğan is right to emphasise that Marx takes this Hegelian innovation to new heights by articulating it more fully in conjunction with the labour process – and that the alienated labour process mirrors the abstraction of the political realm. The labour of the worker is transformed into a commodity for the purposes of value transfer and extraction, subsequently becoming an alien power which cannot produce social recognition; the worker becomes a commodity rather than a person, thus affecting ‘the individual’s loss of relationships’ (86). Because Hegel ignores estrangement, his formulation of the citizen defined by rights and duties becomes in effect illusory predicated upon an abstract myth of enlightened totality freed from contradiction. Marx takes from Hegel relationality as a central concept, but fully applies it by avoiding idealist abstraction. If anything, Marx recognises that the liberal individual, defined as the citizen, is isolated through abstraction, an atom without relation thus creating a mythic barrier to the political transformation of the mode of production. Consequently, political subjectivity for Doğan is premised on a fundamental mystification – humanity’s productive species-being is reduced to an isolated individualism of the egoistic liberal state, the separation of civil society from the state creating an idealised conception of political society. As she argues: ‘the individual as a single being in society is an imaginary being and his relation with the political state is illusory and thus the individual in this sense is an illusory being’ (137). Therefore, to understand individuality through Marx, we must understand how it determined in a relational schema, but also how it is historically determined in a material sense. Doğan draws from her reading of Marx the clear political conclusion that we need to unravel the illusory nature of contemporary conceptions of individuality, exposing its implicit contradictions and therefore undermining the ideological premises of neoliberal capitalism.

By contrast, although with many parallels to Doğan’s thesis, Etienne Balibar has spoken of Marx’s writings as having effectuated an epistemological transition away from prevalent viewpoints on individualism and holism: ‘Marx will embrace neither the ‘monad’ of Hobbes and Bentham, nor the ‘grand être’ of August Comte’ (Balibar, 2017: 30). For Balibar, Marx’s writings have offered a means to displace the fundamental notion of an essential essence of humanity, and that to understand individuals we must look not at any fundamental substance, but rather at their interactions. In this way, Marx, for Balibar, establishes an ontology of relations synonymous with the sixth thesis on Feuerbach: ‘Feuerbach resolves the religious essence into the human essence. But the human essence is no abstraction inherent in each single individual. In its reality it is the ensemble of social relations’ (Marx cited in Balibar, 2017: 16). Doğan, however does not recognise the break in Marx between his early and later works, preferring instead to articulate an organic transition between the two periods. This difference in perspective poses a tension between two exegeses of Marx’s works, each although recognising the priority of relations, nonetheless differing on where this leads philosophically. For Balibar, the break in Marx, his overcoming of his early Hegelianism through a development of Feuerbach’s materialism, results in an aporia, whereby the concepts of individuality, essence, human nature, etc., render themselves obsolete – or at least remain irrevocably tied to the weighty baggage of both speculative philosophy and Greek thought manifest in Aristotelian and Platonic formalism. As result, Balibar reframes the whole debate under the term transindividuality, which immediately suggests an understanding of the individual defined by its relations and transformations. In contrast, Doğan asserts the necessity for overcoming the illusory character of liberal subjectivity and how it creates human suffering. Here, we must move beyond a mystified framework and find the real relations that underpin society – to transform our fabricated relations into a real movement of emancipation. Doğan represents the aforementioned real humanism popularised by Bloch, whilst Balibar asserts a form of theoretical anti-humanism.

We can more fully express these alternative approaches through the medium of money. Doğan, in her reading of Marx’s early works, sees money as a crucial element in the immiseration and alienation of the subject through its mystification of social relations (125), whilst Balibar in his reading of the late Marx sees money as neither positive nor negative, but rather as something fundamental to the way in which we can conceive of the relationality at the core of individuality. As he argues, utilising Althusser’s concept of the society effect: ‘it is the system of things exchanged against each other, objectified in monetary expression, which not only makes individuals see the ‘society’ of which they are members, but also establishes it, since without this representation, individual producers would not exist for one another, nor would they form ‘society’.’ (Balibar, 2018: 11). These two readings therefore have parallels, but Balibar diverges from the humanist problematic by not claiming to pursue a project of demystification, since social relations are always in a state of mediation – ideas and things being integral to the functioning of society. Therefore, the truth in the anti-humanist vein is never strictly obtainable but rather always in the process of transition.

Doğan’s return Marx’s Hegelianism thus draws attention to the tension of Marx’s writings, his desire to comprehend complexity whilst nonetheless overcoming the flawed idealisms of previous systems of thought. Tracing Marx’s evolution and his roots remains a vibrant source for researchers, and even 200 years later we can still see the contemporary relevance of the questions with which Marx was grappling (along with many of his answers). As Marxists, it is a worthy endeavour to problematise the pretensions of liberal atomism, its inherent abstractions and fictions. But there are various ways to approach the same questions and, as this review has sought to illustrate, debates from decades past continue to remerge and provide fuel for theoretical innovation. Doğan has therefore made a worthy contribution to Marxist scholarship, one which will provoke continued debate and be a fruitful resource for students and scholars alike.