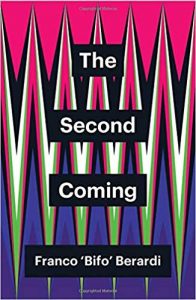 Berardi’s book surveys the contemporary global consciousness and finds chaos, sensory overload, ambiguity, economic autopoiesis, cybernetic colonization of civil society, the paralysis of collective political action, subcultures of vengeance, and nihilism. Only a second coming of communism can save us now, and it’s time to rethink the forms of social and political praxis that will herald this New Jerusalem.

Learning how to interpret the conditions of possibility for greater autonomy and self-realization is the key. But first we must have a sense of what we are up against. According to Berardi, chaos is the condition generated by our inability to process and evaluate the surfeit of information produced by the information economy. The complexity, immensity, and immediacy of the ‘infosphere’ has overwhelmed the ‘psychosphere.’ In this condition of overdetermination, the mind cannot confidently identify structures, causes, patterns, and consequences. The result is that antithetical concepts such as truth and falsehood, fact and myth, and authentic and inauthentic lose their meaning.

Berardi suggests that the global techno-economic system transforms social relationships, social skills, knowledge, abilities, and human labor into mathematical codes that evolve and proliferate in an autopoietic system. Life withdraws into abstraction as we are positioned in a world of ‘knowledge without consciousness’ (53). Information flows through us and we act on it without any sense of personal ownership or value. Nihilism is the result.

According to Berardi, the system is immune to transformative criticism because it entertains all positions and allows every voice to be heard. Serious criticisms mix and mingle with absurd conspiracy theories, apocalyptic scenarios, and fake news.

How do we begin to bring about the solution, the second coming of communism? Berardi reinterprets Marx’s Eleventh Thesis on Feuerbach, stressing the importance of interpretation as a form of political praxis. He claims, ‘It may be that Marx’s famous eleventh thesis on Feuerbach – the central pillar of the revolutionary methodology of the last century and a half – simply needs to be overturned. Marx wrote there that ‘Philosophers have hitherto only interpreted the world in various ways; the point is to change it’ – and the philosophers of the last century tried to do so. The results are catastrophic’ (3).

We need to develop radical interpretations of our contemporary situation that open up possibilities for genuinely liberating action in a world that is meticulously interpreted, ranked, rated, and prepackaged for us. There is a wealth of knowledge, potential, and possibility in what Berardi refers to as the ‘General Intellect,’ that stock of global knowledge which we all, in principle, have access to. In the more prosperous societies it seems possible to realize Marx’s ideal of self-development as outlined in The German Ideology, each person becoming fully human by doing many different things without becoming any one of those things. However, the system is so relentless in its production of what is probable that it becomes difficult to see what is possible.

Turning to a few criticisms, Berardi’s text is a loosely-woven collection of insights, many of which have appeared in previous publications. As such, it suffers from a coherent method and structure. Although his rhizomatic approach is suggestive and useful, he often falls back on conventional and unconvincing methods of analysis. He is especially fond of positing inverse relationships similar to those employed by Marx in The Economic and Philosophic Manuscripts, ‘The worker becomes all the poorer the more wealth he produces . . .the worker becomes an ever cheaper commodity the more commodities he creates. The devaluation of the world of men is in direct proportion to the increasing value of the world of things.’

Berardi employs the same logic throughout the text, like an hourglass, one part of life fills up in proportion to the other part emptying out. ‘Technological potency has steadily expanded while social consciousness has decreased proportionately’ (12).

Berardi also tends to use anecdotes instead of evidence when it suits his purpose. For example, he claims that two factors responsible for our inability to interpret our way out of the labyrinthine system are sensory overload and a decline in the quality of education. ‘The expansion of the infosphere has forced the acceleration of the mental reaction to info-nervous stimulation. But the critical mind is unable to function in conditions of info-nervous saturation, while the rate of education and the quality of education have fallen and deteriorated’ (19).

Both of these assertions are problematic. Regarding sensory overload, which Berardi refers to as the inability of the ‘psychosphere’ to keep up with the ‘infosphere,’ humans have always been challenged by information rich environments. We adapt quite rapidly to large quantities of stimuli that remain constant in our environment and we learn quickly how to focus our attention on the essential aspects of a complex situation. However, as the demand for screening out information increases we do probably become less empathetic and sensitive, which is one of Berardi’s important points.

Rather than brute information overload, it seems more likely that part of the problem is total absorption. We are like fish who don’t recognize the water, and the water is the ubiquitous complexity of prepackaged social relations expanding in open-ended structures, paths, and networks. The system works so well because the overall feel is not constriction and limitation, but expansive freedom and endless novelty.

The other problem is that it is not clear that we are becoming dumber. This is a form of Golden-Age thinking. Berardi claims that, ‘Idiocy is spreading worldwide as a revolt against the mathematical rationality of financial plundering: a blackout of reason, as revenge does not listen to reason’ (5). Yet the data suggests otherwise. The global literacy rate has increased by 4% every 5 years for the past 65 years, increasing from 42% worldwide in 1960 to 86% in 2015.

On the other hand, if Berardi’s concern about the spread of ‘idiocy’ refers to racism, sexism, xenophobia, and other forms of retrograde thinking, it is unlikely that this is a reaction to the unassailable machinations of the international financial system, as he claims. It seems more likely that our awareness of social injustices, as well as our capacity for empathy has increased, while the phenomena themselves have not become more widespread or barbaric.

Finally, Berardi’s fleeting comments about Taoism and Wu Wei, effortless action, are intriguing, given his description of a system that has no edges and no exterior. However, it is hard to tell what Berardi means because he often falls back on gnostic proclamations such as this when a clearer exposition is in order: ‘The secret is a content hidden from public view. You need the key that enables you to open the safe and you will know the hidden truth’ (100).

The Second Coming obviously refers to Yeats’ poem of the same title. Berardi’s apocalyptic tone and his refusal to offer so much as a glimpse of a better future might make us wonder what rough beast slouches toward us to be born, but that’s about it.