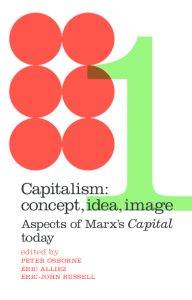 The book is a collection of wide-ranging essays based on a conference organised by the Centre for Modern European Philosophy to mark 150 years since the publication of Karl Marx’s Capital Volume 1. As Peter Osborne notes in the introduction, the essay topics span from engagement with ‘value-form theory’ to György Lukacs, from the Frankfurt School to the ever influential Operaismo tradition.

Boris Buden’s chapter ‘It’s getting darker around the sun of freedom: Capital, translation and the re-feudalization of capitalism’ presents the shocking news that the Ben Fowkes translation of Capital Volume 1 into English that has been used since 1976, has numerous inaccuracies. When Marx uses the same term in German, suggesting it has conceptual potential, Fowkes uses different words depending on the context. Surely a challenge has been made to produce an updated English translation. Elena Louisa Lange’s chapter ‘Form analysis and critique: Marx’s social labour theory of value’ is perhaps the most technical of the contributions providing a convincing critique of Chris Arthur’s ‘new dialectics’ approach to Capital.  Gayatri Chakravorty Spivak’s chapter ‘Capital’s destinerrance as event and task’ presents a typically idiosyncratic reading of Capital Volume 1 as a book about the ‘citizen’. John Kraniauskas’s chapter ‘The reflux of money: outlaw accumulation and territorialisation in Breaking Bad’ provides an entertaining discussion of Breaking Bad the TV show via Marx’s economic categories and Deleuze and Guattari’s work applied to the narcotics industry.

Many chapters cover the topics of ‘social reproduction’ and a variation of debates around ‘formal and real subsumption’, which are both traditional concerns of Operaismo. Étienne Balibar’s contribution ‘A New Critique of Political Economy: from generalized surplus value to total subsumption’ combines both themes. Marx’s concept of ‘productive labour’, meaning labour that produces ‘surplus-value’ and is therefore productive in a capitalist sense, is too narrow. The concept derives from Marx’s desire to mark out the proletariat as the unique agent of change at the time of the Industrial Revolution as a class that produces the profits that the system runs on. Balibar shifts the focus from production to consumption using the example of how the health industry has moved from a focus on illness as sporadic conditions to chronic ones, exploiting illness as a lived and continuous experience to capture profit. Balibar calls this steady process of commodification ‘absolute capitalism’ in which life is exploited rather than just ‘labour-power’. The progressive commodification of social life has other ramifications beyond the purely economic. Eric-John Russell’s chapter ‘From the commodity to the Spectacle: Debord’s Marx’ skillfully highlights the connection between Debord’s ‘Spectacle’ and it’s grounding in Marx’s concept of ‘forms of appearance’ developed in Capital Volume 1’s discussion of ‘Value’. The ‘Spectacle’ for Debord is not a falsified representation of reality, but ‘the appearance and justification of the actual distortion or perversion of social reality itself’ (66). What could be explored in future is how Lukács’s concept of ‘reification’ outlined in History and Class Consciousness links Debord’s concept of the ‘Spectacle’ with Marx’s discussion of ‘forms of appearance’ and the ‘fetishism of commodities’ in Capital Volume 1.

Tithi Bhattacharya’s chapter ‘From the Production of Value to the Valuing of Reproduction’ presents a version of ‘social reproduction theory’ (SRT) with much of the Operaismo scaffolding removed. This version of SRT focuses on its ability to grasp the racialised and gendered differentiation of the working class. Bhattacharya states many Marxist accounts of racism locate its enduring power in the competition of the labour market, but labour-power is already differently valued before it reaches production. Socially reproductive activities involving access to housing, education, healthcare, and police violence lower the value of ‘labour-power’ of parts of the working class. The upshot of this analysis is that struggles outside of production are valued equally to struggles within it. This does not seem like much of an advance on Lenin’s hegemonic project of fusing the power of the working class with other anti-state agents (students, victims of anti-Semitism etc) to engage in political struggle as outlined in What is to be Done? The unproductive part (those that do not directly produce ‘surplus value’) of the working class and oppressed groups’ struggles are not marginalised in this approach. The uniqueness of the origins and operation of various forms of oppression (for example, racism and sexism) can be blurred under the overall socially reproductive banner. The analysis of racism is still focused on the value of labour-power, something which does not seem to cover the threat to ‘Western Civilisation’ discourse of Islamophobia. Sara R. Farris’s chapter ‘Social Reproduction and racialized surplus populations’ aims to explore whether the demonisation of Muslim men as uniquely sexist is related to the role Muslim women migrants play in host countries economies using the concept of ‘social reproduction’. Muslim and racialised migrant women are described as plugging a gap in the care industry to allow Western women to partake in employment, predominantly in the public sector. This is a case of conceptual overstretch for social reproduction theory, without allowing for the relative autonomy of Islamophobic ideology, an economically deterministic tone is struck that links economic needs directly with racism without mediating concepts.

Antonio Negri’s chapter ‘Marxian Ontology Today’ is a concise and clear exposition of his analysis of the conjuncture. Cooperative activity is parasitically captured by capitalists, activities of reproduction and production are increasingly organised autonomously and then captured after the fact. Capital no longer organises production. Interestingly Marx’s conception of ‘real subsumption’ meant production that was exclusively designed and controlled by capitalists rather than pre-existing practices being massified, as happened in the beginning of the system under ‘formal subsumption’. In this sense, Negri’s account is a step beyond ‘real subsumption’ as Marx understood it (if not Negri’s unique interpretation of the term). This approach shifts agency to the capitalist system as it stands now rather than the ‘multitude’ resisting it. Marx may have been a proto-Accelerationist in the Communist Manifesto, but as Keston Sutherland points out in his chapter ‘The Poetics of Capital’ in Capital Volume 1, ‘Marx assaults his reader with the image of beloved limbs ripped up and darling heads crushed flat’ (206) and that ‘the truth of Capital hurts and reading it needs to hurt too’ (214). The analysis of the slightly older capitalism gets a different tone and focus; details of poverty, colonialism, unemployment, disfigurement of body and soul abound in the book.

Éric Alliez and Mauarizio Lazzarato’s chapter ‘Subjectivation and War: Marx and Foucault’ criticise both the notion of Acceleration and Negri’s concept of ‘Tendency’, describing its time as ‘passed’ (195): the time of naïve belief in the progressive character of science and technics is a relic of the 1960s. Drawing on Michel Foucault’s concept of ‘War’ and the strategic confrontation between adversaries, agency is restored to opponents of the system. The relationship between the contesting forces is seen in a non-dialectical way as ‘War’ between forces that are engaged in a ‘non-relation’ of ‘pure distance’ (191). Much like the colonised and colonisers at the beginning of Frantz Fanon’s The Wretched of the Earth they inhabit different worlds. This is a ‘Manichean’ struggle captured in Foucault’s phrase the governed vs. the governors used in his sympathetic lectures on neo-liberalism. For Fanon, the ‘Manichean’ stage of struggle gives way to a strategic approach based on an analysis of the power and weaknesses of forces in the country. Autonomous struggles will arise based on class war, race war and so on, while the chance of victory however depends on the strategic approach that Fanon began to develop. Similarly, the move from Operaismo to Autonomia should be seen as a step back, a glorification of resistance over developing a strategy for winning.