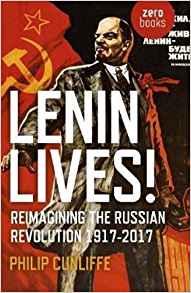 Philip Cunliffe’s narrative account of how history might have happened comes with an enthusiastic endorsement by the founder of the Marx & Philosophy Review of Books. His University of Kent colleague Sean Sayers wrote “What if the hopes of the Russian Revolution had been realised? Setting out from this question Cunliffe shines a great deal of new critical light on our times. Hugely thought-provoking and entertaining. Full of contentious ideas and stimulating insights. A fire cracker of a book.”

There is no questioning Cunliffe’s expertise concerning the Russian Revolution, and what actually happened; and as he explores what might have happened in various parts of the world, he shows broad knowledge and genuine scholarly inquisitiveness. The book is always stimulating, and well-written. Cunliffe also has a wicked sense of humour.

Dr Cunliffe is a Senior Lecturer in International Conflict at Kent University, teaches a module on “Marxism: Politics and International Relations”, and dedicates the book to his students on the module. He completed his PhD in the War Studies Department at King’s College London, examining developing countries’ personnel contribution to United Nations peacekeeping operations. His critically acclaimed third book Legions of Peace: UN Peacekeepers from the Global South (Hurst, 2013) was based on his doctoral research.

So Cunliffe has splendid credentials. Nevertheless, for me at least this is a very odd book, for several reasons.

First, and highly relevant to the title of the book, Lenin, far from “living!” is put gently to a rather obscure sleep by Cunliffe. Chapter Three of the book is entitled “The Best Possible World: Global Socialism”. On p. 70 there is a section entitled – knowingly – “Lenin’s Last Struggle”. I cite the passage on p. 71, in full:

Lenin lives a few years longer into the 1920s, his health less battered by the strain of defending an isolated Russian Revolution. But in this timeline too, his last years are also consumed with a strenuous fight – not against Stalinism, but rather for the global right of nations to self-determination. Attacking the giants of German Marxism from a remote socialist outpost in the East, he is initially castigated and then eventually patronized as the great but backward-looking starik – “Old Man” – of the Revolution, increasingly out of time and too liberal in his concern for protecting the political rights of small nations in the new era of grand revolutionary federations.

Indeed, in this version Lenin has no need to warn his fellow Bolsheviks against Stalin, or to engage in his last struggle with Stalin over the right to independence of Georgia and the federative principle for Soviet Russia, with the right to secede. In Cunliffe’s counter-factual, Stalin continues his career as an obscure administrator, is secretly jealous of Trotsky’s success as a military leader, but remains a loyal Trotskyist until he dies in the 1950s (111)! This is one of the reasons that I admire Cunliffe’s sense of humour.

However, for myself, I consider that two of Lenin’s great achievements were his principled theoretical understanding of the right of nations to self-determination, drawing on Marx and Engels on Poland and Ireland, and fierce polemics with the Austro-Marxists Karl Renner and Otto Bauer; and his stunning implementation of his policy after 1919, with independence for Finland, the Baltics, Poland, and the federative principle in the first Soviet constitutions.

In fact, Lenin’s health was fatally damaged not so much by the strain of defending the Revolution, as by the Left Social Revolutionary Fanny Kaplan who on 30 August 1918, convinced that he was a traitor to the Revolution, shot him outside the Hammer and Sickle factory. Two bullets hit him, one passing through his neck, puncturing part of his left lung, and stopping near his right collarbone; the other lodging in his left shoulder. Lenin survived but never fully recovered. This helped to bring about his early death a few years later. Or perhaps in Cunliffe’s alternative version the shooting never happened either. In his counter-factual world, German socialism, which then spreads around the world, is victorious in 1925 (66).

Another example of Cunliffe’s sense of humour: the capitalist enclave in socialist Germany is named – the German Democratic Republic!

Second, the heroes and heroines of anti-colonial and national liberation struggles also disappear from this alternative history. Colonial empires are destroyed by revolution in the colonial powers, not by uprisings from below. More surprisingly, feminism and civil rights also “become redundant” in the improved twentieth century (111). Somehow the oppression of women, and patriarchy, magically disappear. Feminists might well consider that male privilege and violence and discrimination against women are too deep-rooted to be eradicated so speedily.

Third, Cunliffe imagines what might have been the consequence of the victory of socialism in developed industrial Germany rather than backward Russia. Here he joins the Marx of 1848 in believing that victory against capital would release the productive forces from the shackles of production relations, and would lead to abundance. Thus, he has the new socialist states drawing on Marx’s guidance, so that their “overarching” emphasis is “less on redistribution than on relentlessly improving labour productivity as fast as possible.” (88) Cunliffe adds that Marxism was not designed for the “poverty-stricken, rural and deeply uneven” countries of Latin America, but was designed to uplift, transform and improve the most advanced societies, “building not only on the civic and political freedoms of liberalism but also the economic achievements of capitalism” (90).

Nowhere, as far as I could see, does Cunliffe mention the environment, the planet as a whole, or the effects on it of rapid industrialisation. It is now increasingly understood that Marx’s later work, was characterised by his “turn from a utopian view of technological progress, and his growing recognition of the ecological limits to capital accumulation.” (Bob Jessop) The words cited are from one of many enthusiastic reviews of Kohei Saito’s Karl Marx’s Ecosocialism: Capital, Nature, and the Unfinished Critique of Political Economy (Monthly Review Press, 2017, reviewed here). Winner of the Deutscher Memorial Prize 2018. Michael Heinrich added: “Saito has not only an excellent knowledge of Marx’s oeuvre, he is also occupied with Marx’s sources. He provides an exciting journey, showing how deeply ecological questions are connected to Marx’s unfinished project of a ‘Critique of Political Economy’.” Cunliffe has apparently not noticed these developments in the understanding of Marx’s theoretical development.

Similarly, Cunliffe does not mention Marx’s investigation, towards the end of his life, of a road to socialism which did not have to pass through industrialisation, namely the Russian peasant commune. See Teodor Shanin Late Marx and the Russian Road: Marx and the Peripheries of Capitalism (Routledge, 1983). Marx studied and became adept in Russian, and after several drafts wrote to the Russian revolutionary Vera Zasulich on 8 March 1881.

The question remains: what is Cunliffe’s stand-point? This is not immediately clear from the book itself. But it is well known that he is closely associated with the former Living Marxism or LM network, known for promoting libertarian and anti-environmentalist ideas. Cunliffe with his Sovereignty And Its Discontents (SAID) Working Group, has been a sponsor of The Battle of Ideas organised by the Academy of Ideas (Institute of Ideas), since at least 2004, and he has participated and presented several times more recently. He like the former director and founder of the Institute of Ideas, Claire Fox, who is now an MEP for the Brexit Party, is a passionate supporter of Brexit. He describes himself on Twitter as a “Brexit Bolshevik”. He helped to found the “The Full Brexit”, a pro-Brexit campaigning network. He will be a speaker at The Battle of Ideas in September 2019.

And on 19 July 2019 he re-tweeted Bjorn Lomburg, author of ‘Cool It’ and ‘Skeptical Environmentalist’ (“which challenges widely held beliefs that the world environmental situation is getting worse and worse”), himself tweeting: “Lomborg deserves a medal for being one of the few to retain his sanity among the global intelligentsia.” Lomburg’s tweet?: “Unbridled alarmism: No, our current trajectory is about 4°C, not 6°C. No, 4°C is not the end-of-the-world, it is a problem, equivalent to reducing average income by about 3-4% in 2100 (when OECD will be 200-500% as rich as today and Africa 300-2,200% richer)”.

So I too recommend the book, for many of the same reasons as Sean Sayers. But Dr Cunliffe might have been rather more up-front as to where he is coming from, politically.