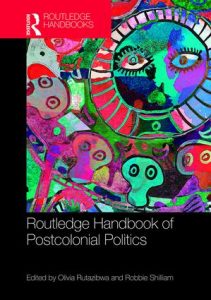 ‘The postcolonial is yet to be born’ (72). These words, coming from Sabelo J. Ndlovu Gatsheni’s chapter in the Routledge Handbook of Postcolonial Politics, perfectly articulate the tension that resides at the heart of the postcolonial condition. Although colonial administrations have been formally dismantled, the colonial condition continues to haunt global politics through its perpetuated distribution of violence, exclusion, and inequality. In fact, the editors argue, global politics can and indeed should be critically (re)appraised as postcolonial politics. This concerns the degree to which topical issues of contemporary global politics such as climate change, terrorism, migration, security, or global governance, are saturated by the legacies of colonial rule and imperial administration. The latter then refers to the notion of coloniality as ‘the rationalities of colonial and imperial rule that survive even in the absence of formal colonialism’ (4). As such, the volume contains a vast range of critical explorations and provocations that retrace the spectre of coloniality within distinctive fields of study such as diplomacy, European integration, neoliberal capitalism, and development. A key contention that supports the entire volume is thereby that these issues are typically framed through an idealised Eurocentric worldview that structures alternative conceptions of global politics as aberrations of the norm or simply ‘not-there-yet’. The moniker postcolonial therefore functions as a heuristic device that draws attention to a wide range of intellectual and agential endeavours that have addressed, challenged, unsettled, or disconnected the legacies of colonialism.

Postcolonial critique is constituted through a diverse and wide range of thinkers and movements that have sought to understand, challenge, and transform the postcolonial moment. Without treating this too monolithically, these movements emerged in contexts that were deeply affected by imperial and settler colonialism. This involves, among others, the Subaltern Studies collective that challenged the elitism in (Indian) Marxism and was itself questioned by Gayatri Spivak through her famous declamation ‘Can the subaltern speak?’, the North-American tradition of Black Studies that demanded racial equality through Black study and power, and the less Anglocentric Philosophy of Liberation of Latin America that has mobilised a potent resistance against coloniality through by actively delinking from colonial structures of knowledge production. Indeed, the latter point neatly encapsulates a point of departure for many postcolonial thinkers and activists: a remembering of the colonial logic of dismembering that has erased and annihilated the knowledges, beliefs, experiences, narratives, and wisdoms of the colonised world. Remembering therefore constitutes an active struggle against dismemberment that seeks to restore that which lies at the heart of the colonial extermination project: humanity. Subsequently, the handbook brings into focus alternative points of departure – both inside and outside the imperial metropole – that seek to decentralise Eurocentrism and dismantle the spectre of coloniality. Accordingly, the first section of the volume discusses a range of topics that are engaged with from a postcolonial point of departure; some are quite obvious such as the colonial fabric of the European Union whereas others are less straightforward yet equally engaging. Pinar Bilgin for instance presents a postcolonial perspective on security that moves beyond the realist-liberal binary, which has had such a detrimental effect on many debates in International Relations.

A central question for any postcolonial politics or theory is arguably how the spectre of coloniality has survived formal colonialism. In order to unpack this, global politics has to be articulated as predominantly postcolonial politics. This essentially refers to a dynamic that has normalised and universalised the Eurocentric worldview and the imbrication of colonial science as the only viable form of knowledge production. As such, denormalising Eurocentrism consists of retrieving alternative imaginaries. In the second section of the volume, a range of imaginaries are presented that are juxtaposed to the Eurocentric matrix of knowledge production. Terrorism, development, feminism, LGBTIQ, or diplomacy have all tended to bear a Eurocentric imprint as they are typically understood as quintessentially European products that harness some of the more fundamental Eurocentric assumptions about rationality and objectivity. This bears a risk of normalising our understanding of these notions as well as the connotations they mobilise about who is a knowing subject and who is a known object. The tribe, for instance, is often deployed as an essentialised category that fixates the Orientalist fantasy about the backward and ‘not there yet’ nature of Afghan society. As Nivi Manchanda argues, these characterisations carry with them not only ‘the risk of simplifying and over-determining the politics of the region but they also actively contributing to the production of Afghanistan as a certain type of ‘intervenable object’: that is, how Afghanistan through recourse to a discourse of tribalism has become ‘fair game’ for intervention, invasion, and nation-building’ (92).

In addition to its ability to substantiate what the postcolonial critique can contribute to our understanding of themes and issues in global politics such as those mentioned above, the volume is also particularly potent when it intersects theoretical reflection with empirical analysis. The (postcolonial) state is for instance discussed as an ambivalent conundrum for postcolonial thinkers and activists on both a theoretical and practical level. Gurminder Bhambra exposes the colonial fabric of Westphalian sovereignty as it makes any engagement with the nation-state a deeply complicated and ambivalent issue. This is directly echoed in Dilar Dirik’s discussion of stateless democracy in Rojava. Learning from the pitfalls and perils of postcolonial nation-states, Dirik argues that Rojava is explicitly anti-nationalist, anti-statist, anti-capitalist, and anti-patriarchal: ‘If the state per se is likened to colonialism, decolonisation then means not to resist the existing colonialists or postcolonial nation-states, but to overcome the state as a system altogether’ (225). As the state locks in hierarchy as well as the extension of colonial rule beyond colonial administrations, it is highly questionable whether the postcolonial can emerge within a colonial structure of domination and exclusion.

The latter point allows the volume to resonate with a range of movements that have, in recent years, called for a dismantling of colonial structures, both material as well as intellectual. Decolonising the university or the curriculum are indeed much-needed struggles, epitomised by for instance the Rhodes Must Fall movement, that have in some cases managed to put decolonisation at the top of the agenda. Unfortunately, the widespread adoption of the decolonising lexicon has in many cases been accompanied by a tendency to domesticate or gentrify decolonisation into a floating signifier. Resonating the famous critique of Eve Tuck and K. Wayne Yang, one must not forget that decolonisation is by no means a metaphor (2012). At its heart, colonisation concerns the appropriation of land, resources, and human beings. Decolonisation therefore is not merely a metaphor but rather a direct challenge to the notion of terra nullius, i.e. the idea that the colonised land belongs to no one and can therefore be appropriated by the coloniser. In short, colonisation has always been about land. It is for these reasons that Andile Mngxitama is particularly sceptical to the suggestions of a decolonised university in a colonial society. Mngxitama hereby refers to Fanon’s analysis of decolonisation as primarily a project of overturning the order of the world, which will indeed be violent. It is only by accepting that colonialism is both primarily and ultimately violent that one can realise that decolonisation requires the immediate return of land by any means necessary.

Postcolonial politics is not only about departing from coloniality, remembering anti-colonial practices, or reclaiming land, resources, dignity, freedom, and, ultimately, humanity. The ubiquitous nature of coloniality has made these decolonial movements contingent on the production of global imaginaries. In short: where do we go from here? The violence of colonialism has left behind a world of outrage and loss as well as a longing for love, healing, and repair. Grafting these currents into a postcolonial image requires us to truly dis-member from the universality of European rationality and including poetic, literary, artistic, and spiritual interpretations of postcolonial politics (353). In the final section of the volume, postcolonial politics presents itself as a pathway towards a pluriverse, or a world in which many worlds are possible, as the Zapatistas argue. A highlight of this section (and indeed the volume as a whole) is arguably the late L. H. M. Ling’s play about a first-year doctoral student in IR, served as a medium to introduce a Daoist conception of global politics. Defying the conventional format of knowledge dissemination in academic publishing, the play eloquently presents not only a tale of a young mind’s introduction to global politics and its colonial fabric but also prefigurates a form of thinking global politics through the assemblage of multiple horizons that highlight the plural and diverse character of postcolonial politics. It is indeed within this image that ‘global politics might no longer be synonymous with postcolonial politics’ (11). It is perhaps then this latter sentence that eloquently encapsulates the goals and strengths of this volume. Although the format of a handbook inevitably carries with it canonical connotations, the fusion of horizons that prefiguratively mends together a world fractured by coloniality is ultimately one that carries with it a promise of a world of many worlds. That is, a postcolonial world.