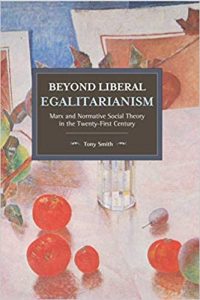 In ‘On the Jewish Question’, Marx famously argues that liberalism cannot deliver human emancipation. In his view, liberalism represents an advance on the systems of religious discrimination and feudal privilege that preceded it. But it is also inadequate, for the ‘political emancipation’ it provides is entirely compatible with – indeed, in Marx’s view, presupposes – the persistence of deep inequalities in wealth and wellbeing in people’s everyday lives. For this reason, Marx argues that genuine human emancipation requires us to move beyond liberalism and to embrace socialism.

The first part of the book provides an overview of liberal egalitarianism, the target of Smith’s critique. The discussion is divided into two parts: the first focuses on liberal egalitarianism’s theoretical commitments, the second on its theory of social and political institutions. In Smith’s view, liberal egalitarianism’s theoretical commitments centrally include five elements: human flourishing, autonomous agency, access to the resources necessary to pursue one’s conception of the good, the development of one’s central capabilities, and a social space for democratic will-formation.  Since liberal egalitarians are also committed to the claim that each individual has equal moral worth, it follows that the core tenet of liberal egalitarianism is the moral equality principle: the principle that each individual should have an equal opportunity to flourish, exercise autonomous agency, access resources, develop central capabilities and engage in public discourse.

As I have already said, Smith’s central claim is that this core thesis is false: no amount of economic regulation or resource-distribution can make a capitalist market society compatible with the moral equality principle.

Before he argues for this view, Smith considers a number of familiar Marxian objections to liberalism, for example that liberalism is based on an atomistic conception of society. Smith plausibly argues that Marxists have often been guilty of attacking a straw man, and that, as a consequence, many of their criticisms have little force. It is a virtue of Smith’s account of liberalism that he avoids this tendency towards caricature.

Having considered these ‘false starts’, Smith returns to liberal egalitarianism’s core thesis.  To understand why it is false, Smith argues that we need to understand the concept of capital; and to understand the concept of capital, we need to turn to Marx. Smith helpfully explains the key elements in Marx’s social and economic theory, introducing Marx’s concepts of the commodity, value, abstract labour and money, before turning to the key concept of capital. Marx’s key insight is that the capitalist market societies are dominated by the ‘valorisation imperative’, the accumulation of money as an end in itself. In such societies, Smith explains, ‘human ends, the human good, and human flourishing are systematically subordinated to the end of the good, and the flourishing of capital’ (xii).

This concept of capital paves the way for the claim that capitalist market society can never be one in which the moral equality principle is realised. Smith’s strategy is to show how the valorisation imperative frustrates the five theoretical commitments of liberal egalitarianism: human flourishing, autonomous agency, access to resources, central capabilities, and democratic will-formation. To give just one of Smith’s example: capitalism has generated enormous increases in productivity. Such increases could be used to reduce the amount of time in wage-labour, thus enabling people to spend more time in activities that lend themselves to human flourishing: spending time with family and friends, developing new skills and abilities, participating in the organisation of voluntary associations, and so on. Under capitalism, however, these increases in productivity are used to increase output rather than reduce wage-labour.  Advances in productivity and technology, which could contribute to human flourishing, only contribute to the flourishing of capital.

Having discussed Marx’s challenge to liberal egalitarianism, Smith considers various different liberal egalitarian lines of reply. The common element in these replies takes us back to the core thesis of liberal egalitarianism, the claim that capitalism’s defects can be overcome through concerted state action. Thus, a liberal egalitarian might accept that under capitalism advances in productivity will typically be used to increase output rather than decrease wage-labour. However, they would argue that the state could check this tendency. For example, in recent years a number of liberal egalitarians have argued that a sufficiently generous basic income would liberate people from the compulsion of wage-labour, thereby giving them the real freedom to work less if they so wish. In reply, Smith concedes that state action can mitigate the destructive consequences of capitalism’s relentless pursuit of profit, but plausibly argues that it cannot eliminate it completely, for a redistribution of income and wealth sufficient to meet liberal egalitarian goals would threaten the functioning of capitalism itself. Consequently, any such proposal would be met with overwhelming resistance by the representatives of capital.

The final part of the book is devoted to a discussion of various different forms of liberal egalitarianism. These include a neo-Schumpeterian version that holds that the destructive aspects of capitalism are simply a price that must be paid for the benefits of its creative aspects; a version that focuses on the rise of a new mode of production, commons-based peer production, that exists alongside capitalism; and a version of liberal egalitarianism as property-owning democracy that receives discussion in Rawls’s later writings and has recently been taken up by some of his followers. In each case, Smith argues that each version leaves the ‘reign of capital’ in place, and thus can never be a society in which the moral equality principle is realised.

The foregoing discussion only provides the barest of sketches of Smith’s main arguments and conclusions. The book contains much more besides. Rather than detail this other material, however, I conclude with three more general comments about the core themes of the book.

My first comment concerns Smith’s understanding of the relationship between Marx and liberal egalitarianism. One interesting feature of Smith’s interpretation of this relationship is his claim that the core normative commitments of Marx and liberal egalitarians ‘broadly coincide’ ( 341). In particular, Smith claims that Marx would accept the moral equality principle, and that liberal egalitarians would accept Marx’s view of a good society as one in which ‘the free development of each is the free development of all’.  The disagreement between Marx and liberal egalitarians, in Smith’s view, is solely about institutions. At the level of values, ‘there is no need to go beyond liberal egalitarianism’ (341). This interpretation is controversial, and I think it is fair to say that Smith does not say much to defend it. On an alternative reading – famously put forward by Allen Wood – Marx was a fierce critic of the very notions of justice and equality. On this view, his critique of liberalism is not limited to its theory of institutions but extends to its normative commitments. For what it is worth, I think that Smith is right to argue that Marx and liberal egalitarians share more normative ground than is commonly supposed. Indeed, I have defended a similar view in my own work. However, those with a different view may well think that Smith has missed, or at least downplayed, an important element in Marx’s critique of liberalism.

My second comment concerns an omission. Although Smith discusses the work of a number of contemporary philosophers, readers of the book might be surprised to find that there is no discussion of G. A. Cohen. As is well known, Cohen’s first book provided an interpretation and defence of Marx’s theory of history. His work then turned towards a sustained engagement with the work of liberal egalitarian philosophers Ronald Dworkin and John Rawls. This engagement was often interpreted as a turn away from Marx. However, Cohen’s last work, Why Not Socialism?, reaffirms the traditional socialist view that the capitalist market is an intrinsically undesirable way of organising economic activity, in that it encourages productive contribution on the basis of motivations – greed and fear – that are inimical to socialist community. In this sense, Cohen was also looking to go beyond liberal egalitarianism. For this reason, it is something of a surprise that he does not feature in the present work. I would have thought he would have made an ideal interlocutor.

My third comment concerns the ‘core thesis’ of liberal egalitarianism. Recall that this states that a ‘capitalist market society is compatible with the institutionalization of the moral equality principle so long as the systematic tendencies of markets to generate results incompatible with that principle are put out of play by effective regulation’. Now, Smith is surely right that many liberal egalitarians hold this view. But I suspect that some liberal egalitarians would accept Smith’s more pessimistic claim that no amount of political regulation can tame capitalism completely. These liberal egalitarians may nevertheless still endorse capitalism, on the grounds that we do not (yet?) have a compelling alternative to it. Overcoming their attachment to capitalism would not be a matter of persuading them that a capitalist market society can never be a society in which the moral equality principle is realised, since they already accept that it will never be. Rather, one would have to provide a compelling alternative to capitalism. In fairness, Smith sketches an interesting alternative in the final pages of the book, one that emphasises the overcoming of the valorisation imperative and workplace democracy. However, it is just that – a sketch. As such, liberal egalitarians may well prefer to stick with the devil they know.

It would, however, be unfair to expect a single book to reconstruct Marx’s view of capitalism and his alternative to it. Beyond Liberal Egalitarianism provides a fair-minded overview of the core tenets of liberal egalitarianism, a clear interpretation of the key elements of Marx’s social theory, and an excellent account of why Marx thought that a capitalist market society will never deliver freedom, equality and human flourishing.  It is an important resource for anyone who wants to understand the challenge Marx presents to liberal egalitarian political philosophy.