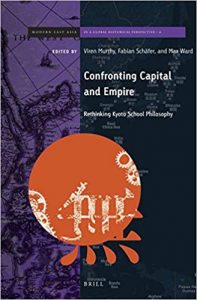 Dr Bradley Kaye is an independent scholar working as an editor at Edwin Mellen Press. He has a …

In the last several years there have been more and more notable full-length books published on the Kyoto School and continental philosophy and this volume adds to the growing interest among Western scholars in the Kyoto School philosophers. The essays in this book break nicely into three distinct categories, centering around an opening salvo on philosophy and answerability by Harry Harootunian.

Most of the essays in this section advance the thesis that Nishida over-determines ‘the nothing’ – and while, this may be a valid point, they rely heavily on Hegelian-Marxist dialectics to disprove Nishida’s anti-substantialist view of ontology. By an under-utilization of Nishida’s zen-infused variations on the dialectic, some of the analysis may have missed a few crucial points. The section nevertheless serves as a useful reference guide.

The next section is about Tanabe Hajime and his responses to imperialism and capitalism. The main question here is whether or not Tanabe’s famous Philosophy as Metanoetics was produced as a way of relieving trauma after the Japanese defeat in WW2. A historical materialist view of the religious opiate of the masses is provided, where Tanabe’s metaphysics gives religious consultation to Japan in the aftermath of the war, trying to pick up the pieces.

The final section is important because it calls attention to some of the lesser known figures in the Kyoto School, some of whom have works still without an English translation. All in all, every chapter, in one way or another, grapples with the Kyoto School philosophers and their responses to Marxism. Given that the Kyoto School emerged at a time in the interregnum between the two world wars, and then continued to produce some of the best philosophers in the history of Japan, their work is crucial to understanding the Japanese reception of Marxist thought. Although it should be said, for neither Marxism nor the Kyoto School is the ‘nation-state’ as an epistemological object treated as a transcendental a priori truth. Japan, capitalism and any other social order is here studied as a set of historical contingencies. In addition, the volume will be useful for cataloging and understanding the ways in which the perception of Marx shifted in Japan prior to and subsequently after the Second World War. For that reason alone, the book will undoubtedly be of use to scholars as a reference, and specifically for those interested in Japanese philosophical history and the perceptions of Marxist thought outside a strictly European, or broadly-construed Western context.

With its publication, the book offers a great inclusion, in a growing number of texts, which assert a comparative approach to East-West philosophy. What differs about this volume and makes it worthwhile is that there are so few comparative studies of East-West political theory, let alone responses and additions to what one might call radical thought and the politics of praxis, especially in dealing with philosophies that were deeply moved at a time when the future of the world hung in the balance. While not explicitly using any concepts like ‘Critical Theory’ readers are provided a unique contextualization of Marx occurring almost simultaneously with the emergence of the Frankfurt School and “Western Marxism” tradition, but in a parallel way that uniquely differs on so many levels. While there are obvious disagreements within the Kyoto School – and for those unfamiliar with the Kyoto School you will get an education on the finer points between Tanabe Hajime, Nishida Kitarō, and others – the reader also sees how they appropriate Hegelian dialectics and Marxian concepts, while yet differing from Marx himself by utilizing them into what might reductively be called a Zen, or uniquely Japanese ‘metaphysics.’ One might argue, as some have, that their purpose was to create a philosophical reservoir of thought so deep that Japanese philosophy would have its own renaissance period from which to draw, akin to the German Idealists who inspired the young-Hegelian Marx, but not in a way that replicated work which came before, an approach happy to see emphasized by two essays in the book.

The first is Harry Harootunian’s ‘Philosophy and Answerability: The Kyoto School and the Epiphanic Moment of World History’, which entails a careful reading of Mikhail Bahktin and perhaps the most prominent Marxist among the Kyoto School, Miki Kiyoshi. The second is William Haver’s ‘The Labor Process and the Genesis of Historical Time: With Marx, With Nishida’, which alone, it can be said, makes the volume worth acquiring. Haver provides a wonderful piece asking ‘what is history’, ‘what is a human being’ and ‘what is production’, all basic formulations philosophers should be asking. The essay does not rely on a strict veridical hermeneutics of either Marx or Nishida and therefore finds an accord with the philosophies of both by creating and producing, rather than reiterating and replicating.

While most of the other essays are interesting as reference guides, there are a few others that have some semblance of original work. For the most part, the other essays consist of literature reviews of the Kyoto School and are useful for those trying to instigate an initial encounter with eastern thought as it relates to Marx. These are useful as reference guides for engagements and possible connections between the Kyoto School and Marxist thinkers spanning the twentieth century. For example, there is a substantial treatment of Althusser’s ‘aleatory materialism’ insofar as Tanabe’s conception of contingency may have anticipated some of these theoretical moves.

Marxism typically breaks down into neatly confined categories distinguishing between historical and philosophical analysis, with historical materialism typically viewed as the overdetermining factor between the two. The volume does a beautiful job navigating between the historical framework and the singularity of each philosopher without effacing either during the investigations. For that reason alone, Confronting Capital and Empire will be of interest to those studying the reception of the ‘philosophy of praxis’ in Japan.

This approach culminates in an obvious sort of move towards a substantive study where all the major figures in the Kyoto School are brought into a dialectic with what one would broadly construe as ‘Marxism’ and ‘Critical Theory’ which the introduction takes care to categorize as two different modes of engagement. Most of the essays try to utilize both modes of engagement and one of the important contributions made by the book, not just to Kyoto School studies but also to Marxist theory, is that these two methods need not be delineated as separate. Even when criticizing Kyoto philosophy, doing so with an eye towards a careful reading of its philosophy, and not just as an historical subsuming of ‘otherness’ underneath the inertia of Marx as an arbiter of truth which transcends both historical space and time, is commendably upheld throughout the volume.

So often with essay collections, readers wind up wanting more because of the format structure. There is usually never enough space for an in-depth treatment of a particular subject matter. The same problem persists with this volume although it is no drawback. Simply because very few professors teaching philosophy in the West engage substantively with the Kyoto School, and the fact that there is such scant published material on their work, gives the book an important function as a foray into the Kyoto School, especially for those who work on political theory, particularly Marxist thought. Tanabe’s philosophy is illuminated fluently and, not surprisingly, the least believable philosophy of metanoetics receives the most clarification. In other essays, Nishida is often cast aside, as if a lesser figure in comparison to Marx. It is important however that more books like this exemplify the nuanced singularities that exist within Japanese approaches to metaphysics which perhaps give supple ground for a Marxist engagement with the field, rather than only gravitating towards a Heideggerian view of this topic, from which many of the figures in the Kyoto School tried to differentiate themselves, notably Nishida Kitarō.

There are no weak essays in the entire volume. The editors did a wonderful job screening for the best material on the subject and one can only hope that this will open up new pathways in comparative continental thought, with more books eventually published in this area to accommodate the new style of ‘East-West’ comparative philosophy that is clearly emerging.