Marx & Philosophy Review of BooksReviews‘Philosophy and Revolution: From Kant to Marx’ by Stathis Kouvelakis reviewed by Sean Ledwith 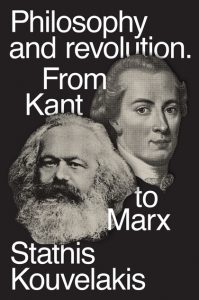 Stathis Kouvelakis
Philosophy and Revolution: From Kant to Marx

Stathis Kouvelakis is a former member of the Syriza party in Greece that was elected to power four years ago. Kouvelakis is no longer a member of the organisation as he was one of the dissenting MPs who rejected Prime Minister Alexis Tsipras’ capitulation to the austerity package imposed by the EU shortly after the election that brought Syriza to power. Kouvelakis is now part of a far-left grouping in Greece that advocates a total break with the EU and a confrontation with the forces of global capital that would be far more radical than anything contemplated by Tsipras. Kouvelakis’ role as an actor in a clash between an elected government of the left and the structures of capitalist power provides additional relevance to this study of the evolution of the political theory of the young Karl Marx. The text was originally written at the beginning of the last decade and has now been re-issued.

This version concludes with an interview with Kouvelakis, now also an academic at King’s College London, in which he reflects on how the period between the two editions has affected his thinking on both Marx’s theoretical trajectory and the prospects for revolutionary change today. As such, this remarkable work is an exploration of a subject that is of obvious significance to the contemporary left by an author who not only sustains the highest levels of analytical rigour but who has also engaged with the questions it raises in a direct and consequential manner. One of the biggest issues addressed by Kouvelakis is the accusation that Marxism’s focus on the social antecedents of many political controversies entails that the latter are epiphenomenal compared to the former. In this work, and also in his political practice as an activist on the Greek far left, the author is committed to restoring the centrality of politics for those seeking to utilise theory in our era. As he writes, ‘Marx was a political actor and thinker par excellence and only became such by elaborating the theory of his practice’ (351).

The first edition of this study in 2003 was promptly hailed by many commentators on the left as the best modern analysis of Marx’s intellectual journey up to the point he encountered Engels in 1844. Kouvelekis’ starting point is to re-examine the famous claim of his erstwhile mentor, Louis Althusser, that around the mid-1840s Marx’s thought underwent an epistemological break between the supposedly humanistic and philosophical perspective of his early writings and the subsequent scientific outlook of Capital and the other works of his later career. The author shares Althusser’s contention that Marx’s outlook in this era underwent a gear-change but rejects his mentor’s notion that this represented a shedding of the Hegelian influence and its replacement by a non-dialectical mode of thinking. In fact, Kouvelakis persuasively argues Marx actually deploys dialectics to critique the great exponent of German idealism and takes the Hegelian system to a level of rigour that even its founder baulked away from. As the author puts it: ‘Marx turned Hegel against himself; he elaborated a Hegelian critique of Hegel. That, needless to add, is the only way to radicalise the process of Hegelian thought, and blaze a path to a Hegel beyond Hegel’ (236).

Kouvelakis discusses how five major German philosophers – Kant, Hegel, Heinrich Heine, Moses Hess, and Marx and Engels (grouped together) – responded to the impact of the French Revolution at the end of the eighteenth century and tried to come to terms with its seismic social and political implications. Aside from Althusser’s inspiration, the author also seeks to engage with the claim of the contemporary French historian, François Furet, that ‘The French Revolution is over’ and that the implied threat its conception represents to all elites can be elided (338). In contrast, Kouvelakis optimistically  suggests the greatest outcome of the fall of the Bastille may, in fact, lie ahead of us: ‘An expansive process by its very nature, permanently displacing the limits within which some have sought to confine it ex post facto, the temporality of the Revolution is in fact pregnant with-indeed, saturated with-the future’ (340).

Kant, as the founder of German idealism, welcomed the rupture of 1789 as a culmination of the Enlightenment ideals of equality and freedom but also believed the reverberations of the revolution needed to be carefully circumscribed and certainly should not be allowed to penetrate his native Prussia. As Kouvelakis notes, ‘German theory’s fundamental ambivalence towards the revolutionary phenomenon’ (10) entailed that, although the shattering of French absolutism was perceived as a progressive event, any extension of the liberatory impulse beyond the frontiers of the new republican regime in Paris was to be discouraged.  The author avoids a crassly mechanical view that Kant’s caution regarding the fall of the Bastille was a consequence of his petty-bourgeois status in German society; however it is difficult to avoid the observation that Kant’s seminal delineation of the realm of experiential phenomena from unknowable noumena reflects, in a mediated form, the unease that would have been felt among the upper classes on the other side of the Rhine concerning the policies of the Jacobin regime. Kouvelakis expresses the probable correlation between Kant’s epistemology and his political interpretation of the French Revolution in characteristically elegant fashion: ‘The Kantian conception of politics and the philosophy of history underlying it are thus taken to their limit, which is, at one and the same time, the point of theory’s greatest advance and the boundary beyond which the whole edifice collapses’ (23).

The ambiguity felt by Kant and his contemporaries regarding the annus mirabilius of 1789 calls to mind Marx’s famous aphorism that the German bourgeoisie achieved in thought what other nations achieved in reality (371). Kouvelakis explores how this remarkable case of uneven and combined development among the post-Kantian intelligentsia centred on how far they believed the ‘German road’ of political development would resemble that of the French. The disunited states of Germany in the first decades of the nineteenth century were inching their way towards unification under the watchful eye of the Prussian monarchy. The contradictions inherent in the process of the feudal Junker elite instigating a bourgeois revolution alongside the emergence of an embryonic proletariat are fully manifested in the Hegelian dialectic. The second great systematiser of German idealism, like his predecessor Kant, was interested in identifying the point at which the revolutionary energy of 1789 threatened to overflow its necessary limits. As Kouvelakis puts it: ‘The technocracy, as he envisages it, fulfils the old Enlightenment ambition for universality; denying its potentially subversive character… Public affairs, for Hegel, are above all the business of those who know, not the ignorant populace, which can, at any moment, change into an uncontrolled, threatening mass’ (41).

The mission of the post-Hegelian Left in Germany was to appropriate the radicalism implicit in the dialectic and deploy it against the ruling class of that country in a direction that the master himself was unwilling to go. One of the numerous achievements of this volume is to restore the poet Heinrich Heine to a position of significance in the familiar story of the rise of Marxism. Kouvelakis stresses how Heine was one of the first thinkers in Europe to appreciate that, although the French Revolution had successfully decapitated the political apparatus of one ruling class, in order to challenge its bourgeois successor, a more thoroughgoing social revolution would be necessary. Heine came to this conclusion by engaging with the followers of Gracchus Babeuf, the executed leader of the far left of the French Revolution, who believed that the liberation of the oppressed essentially would be based on a re-run of 1789.

In contrast, Heine – anticipating Marx – comprehended that the consolidation of the bourgeoisie and the emergence of the urban proletariat would require a new type of revolution to guarantee not just political rights but those in the economic and social spheres as well. Heine perceived that the escalating political crisis in Germany that would culminate with the revolutionary wave of 1848 made that country the ideal location for a ‘new revolution – or rather, as we have seen, the resumption of a single revolutionary process whose embers were simply waiting for the right moment to flare up again’ (75). In this way, Heine, underrated for so long as a political theorist, can be seen to have foreshadowed not only Marx, but also the generation of Russian revolutionaries that included Lenin and Trotsky who conceived the theory of permanent revolution as a framework for converting a bourgeois revolution into a proletarian one.

The author follows his pioneering discussion of Heine by explicating how the young Karl Marx was inspired by the poet – his German compatriot and fellow exile in Paris – to unravel the limitations of both the French Revolution and the original Hegelian system that represented its philosophical equivalent. Kouvelakis suggests that it was a combination of Marx’s contacts with the workers’ movement in Paris and his journalistic activities in the Rhineland that brought him to a position to challenge the acceptance of the status quo that marked the end of Hegel’s theory of the state. Marx’s clashes with the Prussian autocracy over censorship, in contrast to Hegel’s superannuated status, gave the former the insight to see how the dialectic needed to be taken to the next level to explain the contradictions of how a political system could be encouraging industrialisation while, at the same time, repressing a free press: ‘In his reading of Hegel, Marx was to proceed as a consistent Hegelian, inverting Hegel and incorporating, in this inversion…springboards for a critique – but in a way that is still fundamentally Hegelian’ (289).

This reading of the crucial Hegel-Marx relationship is not only insightful and sophisticated but also provides a decisive rejection of Kouvalakis’ mentor and the claim that there was clean break between the systems of these two giants of the nineteenth century.