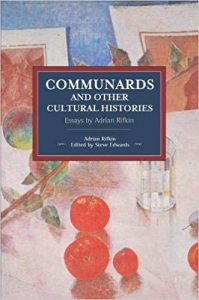 Communards and other Cultural Histories anthologizes essays written over forty years by the art and cultural historian Adrian Rifkin. Rifkin writes on the theorization of nineteenth century French art and culture, the discipline and subject of art history, in particular, the methodologies and positions of “new” and social art histories. The essays discuss the politics of the forms of popular or mass cultures, an imagery which has nothing to do with ‘false feelings and delusion’ (407); the signs and culture of modernity and postmodernity; the symbolization and lived experience of the evolving spaces of modern cities, and the aesthetics of music, film, and fashion. Rifkin comments how an Agnès B. cardigan can become ‘an object of cultural knowledge’ and evoke ‘the collapse of art into culture’ (432). Steve Edwards, the book’s editor,  provides a detailed overview of Rifkin’s Marxist work in art and cultural history. Edwards made his selection to foreground ‘Rifkin’s explicit contribution to Marxist ways of thinking about art’s histories’ (3). Rifkin is introduced as the author of significant Marxist work in the discipline of art history who played an important role in the development of new materialist or Marxist art histories. Edwards’ selection of essays is personal, the anthology represents his Rifkin, and is intended to emphasize the relationship between Rifkin’s practice, Marxism, and materialist histories of art.  For Rifkin himself the essays appear as a ‘series of disrupted and partial projects’ (40). As a body of writing, it is unfinished, the result of procrastination, distraction, and idleness, Rifkin suggests.  However, as Edwards observes, the essays reveal recurring themes, points of continuity, and illuminating repetitions.

The collection is organized in four parts and the first selects essays which focus on the so-called ‘new art history’, its distinguishing methodologies, and its relationship to the existing canon. These essays delight in the possible and impending ruin of the discipline of art history: Rifkin writes of ‘the deconstitution of art history as an academic subject’ (206), and writing in 1978 in the History Workshop Journal, he described art history as a ‘sickly and one-sided discipline’ which might be ‘encouraged to wither away’ (Rifkin, 1978 218). The ‘revolutionary vandalism’ of a ‘faraway’ Maoism expressed Rifkin’s feelings towards the ‘intellectual vacuity’ of the university and to art history as it was traditionally constituted (498).

Rifkin’s essays criticize the strategies of the social history of art and the new art history, which for Rifkin writing in 1986, was ‘an anxious liberal stratagem to market a faded product in a new package’ (51). The discipline or subject of art history had begun to change through the appropriation of earlier Marxist perspectives. The social history of art, which the art historian T. J. Clark had described as his speciality, reclaimed an existing social-historical practice in art history of Frederick Antal, Max Raphael, Arnold Hauser, Meyer Schapiro, and the early work of Clement Greenberg. This practice had been eclipsed by a depoliticized formalism which separated art from history and which tended to focus on the ‘monadic expressive artist’ (2).  Rifkin’s essays in the first part of the book, ‘New Art Histories’, are intensely critical of this project of writing cultural history. In 1979, Rifkin wrote that ideology and class were ‘the most central problems of Marxist cultural analysis’ and although Rifkin recognized Clark’s pivotal role in transplanting ‘the central problematics of ideological analysis’ within art history (65, 61), Rifkin’s essays on new, social, or materialist art histories challenge what he understands as the implicit conservatism and traditionalism of Clark’s social history of art. In his acerbic review of Clark’s The Painting of Modern Life: Paris in the Art of Manet and His Followers (1985) Rifkin describes the book as ‘a traditional art historical lineage of great artists’ which refuses any criticism of ‘the museum form of avant-garde art itself as a source of cultural value’ (71, 70). Drawing on the work of Benjamin and Derrida, Rifkin argues that what were labelled as the new art histories had failed to seriously threaten or contest the status of the established canon, for Benjamin, the ‘expropriated trophies of class domination’ (52). This is an invariant series of masterpieces which demand to be recognized as the natural repository of value. New and social art histories had contested the interpretations of a series of highly valued objects but, for Rifkin, they had failed to threaten the structure of value itself: ‘The masterpieces stay put’ (55). New and social art histories had shown the historical origins and ideological complexities of the masterpieces on display in the Louvre or the Musée d’Orsay, but these objects of analysis or study still survived to remain an obstacle for the future development of the writing of cultural history. So, the social history of art had focussed on the reception of works of art as they appeared in contemporaneous art criticism to establish their historical meanings but, for Rifkin, the highly privileged spaces in which nineteenth century French art was seen – the conditions of display – remained unquestioned. Moreover, the contextualisation of artworks imparted new and ‘unified, monolithic’ meanings that became an alternative and enduring source of timeless cultural value (71).

The visual culture of the Paris Commune of 1871 and the period after its suppression is an important focus of the book; Rifkin is concerned with Commune’s cultural manifestations and writes on mass-produced and popular materials, political prints, cartoons, caricatures, song sheets, and posters. These essays written in the 1980s on the political culture of the Commune are at the heart of Rifkin’s art and cultural history. The earliest essays in the collection, both published in 1979, are on the political prints made for mass consumption in the period of the Franco-Prussian War, the upsurge of the Paris Commune and the fall of the Second Empire in which Rifkin seeks to outline ‘a general theory of popular culture under capitalism’ (195). Rifkin describes a process of negation of forms of existing oppression which emerged from a Babel of radical, republican, and socialist traditions articulated by the prints he discusses. He is also concerned with the cultural policies of the state focussed on censorship and comments on the relative immunity from censorship enjoyed by artists in contrast to printmakers. Rifkin also comments that the revolutionary context of the popular prints had been largely forgotten or whitewashed, and that a central task of Marxist historians should be to ‘undermine the hold of bourgeois ideology both in the present and over the past’ (485). A forgetfulness of class conflict is a common theme of bourgeois culture, Rifkin argues, which is related to a particular concept of visual art as a primarily transcendent activity (181). For Rifkin, the imagery of the political prints embodies political experience and reflect the violence of the social and political conflicts of the period. The crudity and brutality of the anti-commune prints are determined, Rifkin suggests, by the bourgeoisie’s profound fear of social upheaval and its deep hatred of the proletariat and the emancipation of women. Rifkin details the hatred the bourgeoise has for the working class in the aftermath of the suppression of the Paris Commune manifested in images of innate abnormality and stupidity that through their weaknesses bring disaster on themselves. Rifkin is concerned with the profound effect of revolution on visual production: the form and technique of popular imagery was determined by the class struggle in France, the savage suppression of the Commune and the ‘open intensity of class hatred’ which is involved (193). The massacre of the Communards occurred simultaneously with the production of an abusive and ugly imagery that effectively removed the Communards from ‘normal’ standards or modes of perception and representation and constituted them as objects of deserved ‘social revenge’ (221). In discussing the cultural production of the period of the Commune as part of an attempt to discredit and denigrate the Communards, Rifkin refers to a ‘bourgeois ideology of recuperation and revenge’ (486).

In a later essay, ‘Well-Formed Phrases’ (1986), Rifkin writes that he wanted to distance his work on the political prints from the ‘cannibalistic approach of certain kinds of social history of art that eats up little signs in order to give more importance to bigger ones’ (229). Rifkin is critical of art histories that fetishize artistic achievement and what he calls the ‘socially structured version of the creative artist’ (229). Rifkin understands popular prints to visualise social relations and as images which function to allocate ‘individuals a proper place in society’ (235) and he explores how the worker and labour were represented in relation to contemporary political discourses in nineteenth century France in terms of inclusion and exclusion. Prints can either brutally caricature workers or represent them positively, possessing a vital place within industrial society and as the bearer of ideologies of nationhood.

Rifkin’s autobiographical introduction to his work, ‘Re-Reading in Torchlight’, addresses the relation of his practice as an art and cultural historian to Marxism and materialism. He reflects on the institutional framework of art and cultural history in higher education, the contexts of protest and social movements, political and critical theory (Althusser, Gramsci, Mao), which vied for his attention with the voluptuousness and sensuality of the aesthetic. In connection with the autobiographical and personal texts, Communards and Other Histories is particularly interesting on the history and formation of cultural and critical theory in connection with Rifkin’s own intellectual formation. He reflects on an ‘adventurous’ search for ‘an expanded field of cultural analysis’ (365), longing for an ‘elective synthesis’, referencing influential theoretical journals of the later 1960s and 1970s (Screen, Ideology & Consciousness) and the consistencies and inconsistencies of the theoretical and art historical writing that enthralled him in its complexity, such as Julia Kristeva’s writing on Giotto, Bellini, and Holbein. He reflects on how Jacques Rancière’s work enabled this theoretical constellation to be seen or read differently.

In his introduction, Edwards writes that the essays are the remnants of unfinished work. Rifkin remarks that the preliminary sketch had ended up becoming a vocation. Nevertheless, what Edwards describes as Rifkin’s ‘restiveness’ has ‘generated some of the most creative Marxist work in cultural history’ which the volume assembles for study (39).